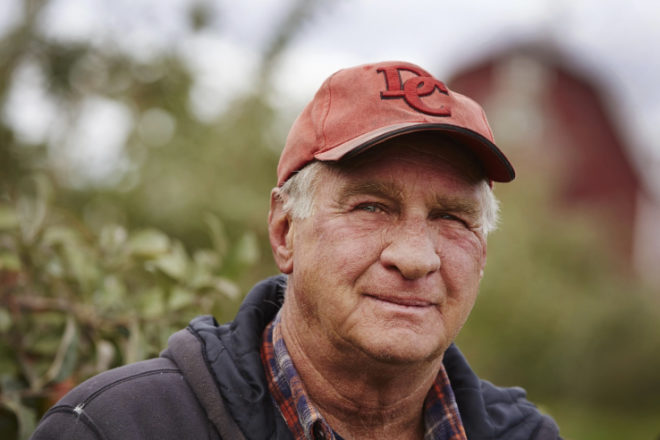 Robert “Bob” C. Lautenbach, 72, died on July 11, 2021, with his loving wife Sherry by his side after suffering from complications of a heart attack this April.

Bob was born in Sturgeon Bay on November 5, 1948, to William and Ruth (Lisch) Lautenbach. In 1955, his family purchased a farm in Fish Creek, where he grew up with his siblings. He attended Gibraltar School, graduating in 1966.

After high school, Bob had a brief encounter with culinary school, later switching to welding, plumbing, and farming. He worked many jobs to support his growing family, such as Bay Ship and ran the snow machine at Nor-Ski Ridge. Over the years, Bob became a jack of all trades, a necessity for taking over the family farm in his mid-20’s.

In 1968, he married Anne Mickelson and together with their four children started planting more orchards, built a farm market, and restored the dairy barn into a winery. In 1987, he welcomed his fifth child with his second wife. In 2008, after many years of friendship with Sherry VanEnkenvoort, they began dating, and in January of 2020, they were wed in Las Vegas.

Bob was a strong and passionate man, yet a simple farmer at heart. He had a fire in his belly, a million ideas in his head, and a great entrepreneurial spirit. He was a fun-loving character, with many stories, a great laugh, and a welcoming smile. He never hesitated to lend a hand to someone in need, or offer some business or life advice, no matter how busy he was. Bob loved being a father and was involved in community projects while his children were in school, even coaching little league several summers. He also loved being Uncle Bobby to his niece and nephew. During his younger years, he enjoyed playing softball and was always an avid sports fan, cheering on the Packers, Brewers and Daytona 500 drivers. Later in life he relaxed while fishing, golfing and picking for “goodies” at estate sales with Sherry. Bob was a wonderful grandfather; he took pride in watching them grow and cherished being called Grandpa Bob.

Bob loved his family and the land he grew up on and was the visionary behind Lautenbach’s Orchard Country. Even though he became very successful over the years, Bob remained humble and appreciative of all those that helped him along the way. He took great pride in what his family had accomplished and enjoyed being a tour guide, especially with school groups and the media. Many friendships developed along the way, especially with those that worked with him, and everyone that enjoyed and supported his family business over the years. He was a very active member of the Wisconsin Cherry Growers Association, serving as President for many years. He was dedicated to promoting the cherry and wine industry every chance he could. In 2015, he was named Grape Grower of the Year and Entrepreneur of the Year. Bob was a well-respected and enthusiastic leader of Ag-tourism in his community, across Door County and throughout the state.

Bob went on to be reunited with his parents; twin brother, William; brother, Alan; as well as many other family members and close friends.

Visitation for family and friends will be Wednesday, July 28, 2021, from 3:00 p.m. to 8:00 p.m. at Huehns Funeral Home, 1414 Michigan St, Sturgeon Bay, WI 54235. A service of remembrance will be held at 6:30 p.m. Wednesday evening at Huehns Funeral Home. Bob will be laid to rest at St. John the Baptist Cemetery in Egg Harbor. A celebration of Bob’s life will take place later in the season.

In lieu of flowers, please consider a donation to the American Heart Association or the American Kidney Fund. Memorials to the family will be used towards a future scholarship fund in Bob’s honor.

Expressions of sympathy, memories, and photos of Bob may be shared with his family through his tribute page at www.huehnsfuneralhome.com.