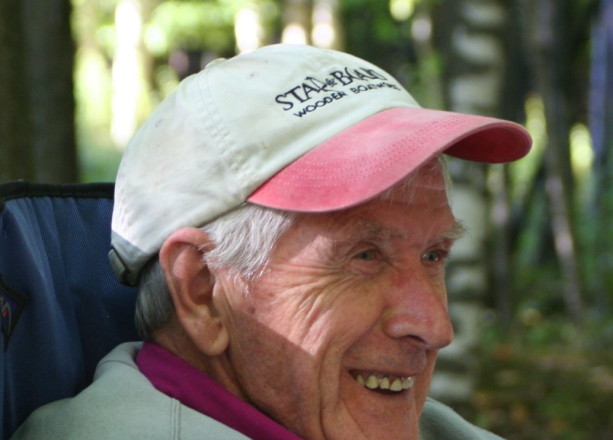 He was born August 13, 1923, in Two Rivers, the son of Algot Charles Kollberg and Lulu Minnie (Liedtke) Kollberg. Russell graduated from Washington High School in Two Rivers in 1942 and entered into active service with the United States Army on November 2, 1942. He served with the Army Air Force during World War II, stationed in Newfoundland and England, as part of the ground crew loading bombs onto planes. Russell was discharged from the Army on October 19, 1945. He went on to study agriculture at the University of Wisconsin-Madison while working in the UW Dairy Barns. He met Rhoda Eloise Jaeckel in Madison, and they were married August 23, 1947, in Sun Prairie. Russell and Rhoda were blessed with over 68 years of marriage together.

Over the years, they lived in Madison, Manitowoc, Mishicot, and Menomonee Falls before following the good fishing and moving to Sturgeon Bay in 1968. While in Mishicot, Russell worked for Badger Breeders out of Shawano for 15 years. He became a state drivers license examiner in 1965 and retired in 1985. Russell was known as the “good guy” amongst the examinees, always lightening the mood with a little of his humor. He had been a volunteer firefighter in Mishicot and was a part-time firefighter in Sturgeon Bay. After his retirement, Russell tested fire hydrants for the Sturgeon Bay Utilities.

He was a member of St. Peters Lutheran Church in Sturgeon Bay.

Russell had a great love for the outdoors, especially fishing and boating. When he retired in 1985, he started building his 25-foot wooden boat in the backyard with help from his best friend, Albert “Bud” Allie. The “Gray Ghost” was launched 18 years later on Father’s Day when Russell was 80.

He also enjoyed hunting, golfing, and skiing, especially in Mishicot, and additionally looked forward to playing a good game of poker with his family and friends. Russell loved listening to classical music with Beethoven being one of his favorite composers.

His love and memory will sail on in the hearts of his dear wife, Rhoda of Sturgeon Bay; three children, Nadine (Don) Chambers of Greenville and her children Nicole (Kyle) Ehlers, Dylan, Luke and Christian Lauger: Keith Kollberg of Sturgeon Bay and his son Rylan Kollberg; Wade (Colleen) Kollberg of Appleton and their children Nathaniel, Aaron, and Sophia Kollberg, Curt Hibbard; sister, Charlotte (Dale) Maule of Grays Lake, IL; and sister-in-law, Claudine Jaeckel of Kiel.

Russell will be laid to rest in Bayside Cemetery.

The Kollberg family would like to extend a heartfelt thanks to the staffs of Unity Hospice and Ministry Door County Medical Center for their compassionate care and concern. Also to the Meals on Wheels staff; Russell really appreciated your service and enjoyed your company.