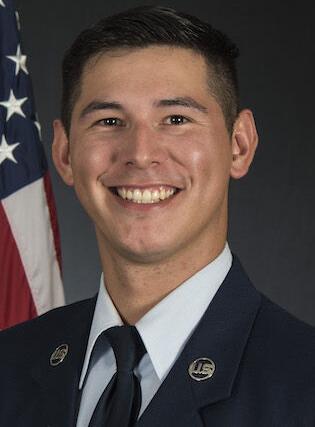 United States Air Force SSgt. Will Stuart Gonzales, 26, died on Tuesday, March 16, 2021 while serving in the 36th Security Forces Squadron at Andersen Air Force Base in Guam. He left this life while riding his beloved Harley Davidson.

Will was born in Sturgeon Bay, WI, to Jodi Anne (Woerfel) Gonzales and the late Johnny Lara Gonzales, Jr. on September 23, 1994, a birthday he shared with his dad. He attended Gibraltar High School in Fish Creek and enjoyed playing basketball, baseball, and running cross country. Will served his community as a member of the Sister Bay & Liberty Grove Fire Department. Upon his graduation from high school in 2013, he enlisted in the United States Air Force in 2014, and he attended basic training at Lackland AFB in San Antonio, TX. Will’s first duty station was at Offutt AFB in Omaha, NE where his daughter, Marissa, was born in 2016. He was then stationed at Andersen AFB in Guam. Will worked as a Combat Arms Instructor where he trained the base populace on the use of small arms, a job he loved and excelled in. He loved his time in Guam; it was where he met and married the love of his life, his wife, Alyssa. Will was a proud member of the Green Knights Military Motorcycle Club, loved to golf, and scuba dive off the coast of Guam.

To know Will was to love him. His military friends were like family to him, and he treated them so. “We are thankful for the care the USAF gave to Will in life and after his death.”

Will was a husband, father, and a son, a hunter and a marksman, an adventurer, a firefighter, an Airman, and a friend to all. Will’s big, beautiful smile and fun-loving personality will never be forgotten.

His memory will live on in the hearts of his loving wife, Alyssa (and their daughter, Danica who was born June 18, 2021); along with the light of his life, his daughter, Marissa (and her mother, Mikaela); his mother and stepfather Jodi (Jody) Robillard of the Town of Gardner, WI, siblings, Jordan, Dana, and Lauren; maternal grandma, Sue Woerfel of the Town of Liberty Grove, WI; his “second” parents, Mark (Jenny) Sitte; and cousins (but more like siblings), Audrey and Nina Sitte; his father’s siblings, Teresa (Steven) Hitzeman of Green Bay, Albert Gonzales of Fayetteville, AR, Anthony Gonzales of Sister Bay, Suzann Jonson of Elgin, IL, along with many other Woerfel and Robillard aunts and uncles; cousins; and friends, all who loved Will dearly.

Will’s life will be celebrated with a memorial service held at 10:00 a.m. on Saturday, August 21, 2021 at Shepherd of the Bay Lutheran Church, 11836 State Highway 42, Ellison Bay, WI 54210 with Pastor James Honig officiating. There will be no scheduled visitation prior to the service.

Will will be laid to rest beside his father, Johnny; son, Waylon; and other relatives in Blossomberg Cemetery in Peninsula State Park, Fish Creek, WI with military honors by the United States Air Force and the Billy Weiss American Legion Post 527.

The memorial service will be livestreamed via the “Casperson Funeral Home & Cremation Services, LLC” Facebook page (www.facebook.com/CaspersonFuneralHome). Those anticipating watching the livestream are encouraged to “Like” the funeral home Facebook page any time prior to the service to receive notification of the (live) broadcast.

Casperson Funeral Home & Cremation Services in Sister Bay, WI is assisting the Gonzales family. Expressions of sympathy, memories, and photos of Will may be shared with his family through his tribute page at www.caspersonfuneralhome.com.