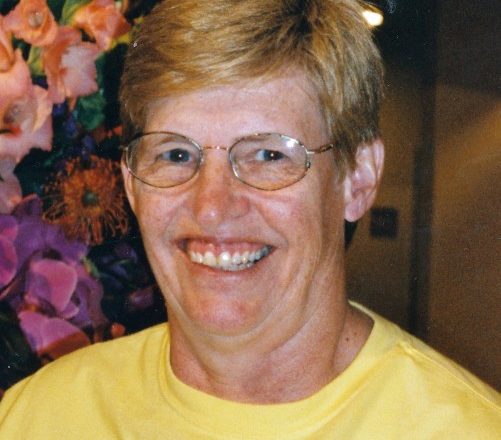 She was born in Milwaukee, daughter of the late Donald and Leta (Von Der Sump) Nairn. Her childhood was spent in Franklin. Following high school, Ginny earned her bachelor’s education degree in physical education at UW-La Crosse. In the early years of her career, Ginny taught at Sheboygan North High School. After receiving her master’s in physical education, she taught at Nicolet High School in Glendale for 25 years. While at Nicolet, she also coached girl’s basketball, swimming, cross country and track.

Ginny and her life partner, Jean Schmul, have been together for 47 years. They met in Girl Scouts. They spent vacations in Door County that led to purchasing the Kiehnau Homestead in Egg Harbor in 1991, spending weekends and holidays and every summer until eventually retiring full time in 2006. Ginny is still known to Jean’s family as “Putzel,” a variation of a German name given to her by her mother.

Prior to purchasing their retirement home, Ginny and Jean traveled around the United States, camping, hiking and sightseeing, starting in a red Mustang. Then they discovered Hawaii and spent a number of years vacationing there during the summers. Ginny and Jean never were told teachers needed to work in the summers, so they set out on their adventures each summer.

Ginny’s upbringing led to her deep love of nature and the outdoors. Every Mother’s Day was spent looking for wild flowers and bird watching, and later, rock hunting with her parents out west. Those traditions and love of her surroundings and people came from her parents during her youth. Bird watching, love of the water, sailing to the Bahamas, traveling the U.S., mountain climbing, snorkeling, scuba diving and bicycle riding followed her throughout life.

Ginny was a true everyday naturalist. In later years, she loved gardening, specifically flower gardening and floral photography as the vegetable gardens around the farm were turned to flower gardens. Ginny and Jean were known as the “Flower Farmers.” Having taught children all her life, she especially enjoyed the neighborhood children, who considered her an expert bike fixer, four-wheeling companion and ball inspector, making sure the proper air pressure was used. She hosted spur-of-the-moment porch parties for the kids, endearing her to everyone. In recent years, she rediscovered her love of singing, joining the Sturgeon Bay Moravian Choir and Door County Community Choir. Ginny was known for her pies, baking skills and chocolate-chip cookies.

Preceding her in death are her parents, Donald and Leta Nairn; step-mother, Maxine; and close family, Charles Schmuhl and Ron Krawczyk.

A celebration of her life will be held at 11 am on Saturday, May 11, at Sturgeon Bay Moravian Church, with Dr. Rev. Matthew R. Knapp and Rev. Reeder Herrick officiating.

Huehns Funeral Home in Sturgeon Bay is assisting the family. Expressions of sympathy, memories and photos of Ginny can be shared through her tribute page at huehnsfuneralhome.com.