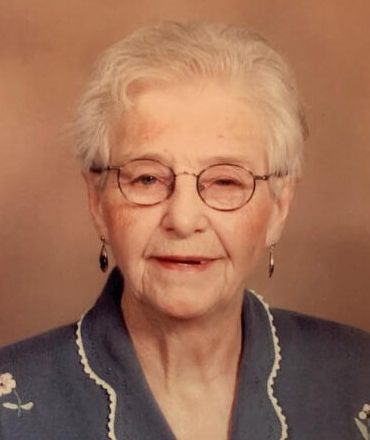 Virginia’s mother, Anna Johnson, married Reinhardt Pfiel when he was assistant Lighthouse Keeper on Cana Island. They honeymooned on the Island and lived there from 1905-1911.

The youngest of eight children, Virginia was born and grew up in Pfiel’s Hall, which her father built in Ellison Bay.  The Hall was an ice cream store, a basketball court (The Globetrotters played there), a roller-skating rink, a movie theater, a dance hall, and the center of social activity in northern Door County.

Clayton Johnson served in the Navy in WWII on the destroyer USS Hudson.  When the Japanese surrendered in 1945, Clayton’s ship returned to Bremerton Washington, near Seattle, he promptly proposed to Virginia via phone and she experienced her first flight to Washington for their wedding.

After Clayton’s discharge, the couple returned to Ellison Bay and he became a commercial fisherman, a job he always loved. After Reinhardt Pfiel died, Clayton and Virginia purchased Pfiel’s Hall and named it Clayton’s Door Stop Supper Club, which is now The Mink River Basin. Clayton’s was a bar, restaurant, and local gathering place.  In the 60s, they offered live music on weekends.  As the spectacular Chef at Clayton’s, Virginia created her famous Baby Back Ribs, Duck A l’Orange, vichyssoise soup, Grand Marnier Pie, Broiled Whitefish, and her famous Smorgasbord. While working 12-hour days, she was the soul of the business.

In 1972, the business was sold and they built a home on Garrett Bay Road and Clayton went back to the fishing business while Virginia opened a small café she called “Neptune’s Pantry”.  After Clayton’s death in 1980, Virginia later moved to an apartment at the Good Samaritan Society – Scandia Village in Sister Bay, eventually moving to the Care Facility.

In retirement she volunteered at Scand and Bargains Unlimited. She was a lifelong member of Trinity Lutheran Church and she was involved in all parish activities.  She never knew a stranger and welcomed all as friends.  She had a tremendous sense of humor, a very creative mind, and was a terrific writer.

She is survived by her son, Kerry Johnson and wife, Lori of Green Bay and daughter, Eileen Johnson Bowers; grandchildren, Heather Bowers-Deneef and Dan Bowers and wife Robyn; and four great-grandchildren all of Indianapolis. She will be missed by all who knew and loved her.

A celebration of Virginia’s life will be held on a date and time to be announced.

She wished for memorial donations be made to Scandia Village and the employees who showed her such loving care in her honor.

Casperson Funeral Home in Sister Bay is assisting the Johnson family. Expressions of sympathy, memories and photos of Virginia may be shared with her family through her tribute page at www.caspersonfuneralhome.com.