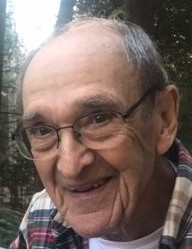 William Frederick Malkemus II, 94, died peacefully in his sleep. Bill went to grade school in University City, Missouri, a suburb of St. Louis. He earned both his bachelor’s and master’s degrees from Washington University in St. Louis, where he was a member of Kappa Alpha fraternity. Fiercely intelligent, Bill was an engineer in the Chicago and St. Louis areas.

During World War II, Bill served as a lieutenant in the Army and saw combat in France, earning the Bronze Star, among other commendations.

Bill was a wonderful husband, father, grandfather, great grandfather, brother and friend — loved by all who knew him. His family was of utmost importance to him. Respected and proud, Bill will be missed and remembered with love by all whose lives he affected.

He had a deep passion for jazz music, thoroughly enjoying the music of luminaries such as Count Basie, Miles Davis and Duke Ellington. A longtime Birch Creek associate, Bill was a fixture, especially for the Jazz I and Jazz II sessions: ushering, making popcorn, running 50/50 and tapping his feet. Bill was also an enormous fan of the St. Louis Blues and was thrilled to be able to finally see the team win the Stanley Cup.

He was preceded in death by his brother, Lloyd Ritchey.

Funeral services will be held Friday, Dec. 20, 11:30 am, at Huehns Funeral Home in Sturgeon Bay, with Pastor Gary Scharrig officiating. Military honors by the VFW Post 3088 will follow. There will be no visitation prior to the service.

In lieu of flowers, the family is asking that donations be directed to Unity Hospice in Green Bay, 2366 Oak Ridge Circle, De Pere, WI 54115.

Expressions of sympathy, memories and photos of Bill can be shared through his tribute page at huehnsfuneralhome.com.