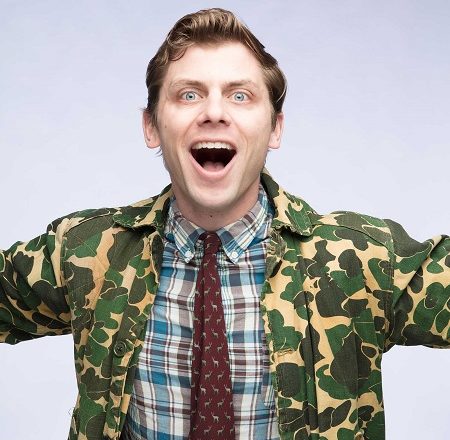 Wrap up your Fall Fest weekend on Sunday, Oct. 20, 7 pm, at the Door Community Auditorium with Charlie Berens! Submitted.

Berens is best known for his online comedy series, Manitowoc Minute. He hosts the short videos newscaster style, listing off the top news stories using a very thick Midwestern accent. Although it might seem like a lackluster series to most, no one can relate better to his comedy than those of us living in the Midwest. Berens’ attention to detail and getting Wisconsin culture down is apparent in all of his videos.

Berens started his career on MTV’s Choose or Lose, a campaign established by the large TV company to get younger generations involved in politics. Berens was selected to report on politics in Wisconsin and was even arrested covering a protest at the Republican National Convention. His interest in reporting started there, and he earned an Emmy for his piece “The Cost of Water” while reporting for KDAF.

Although Berens discovered the importance of a good news report, he’s always been interested in comedy and has dabbled on the side. During a 2018 interview with Fox 6, Berens said that while working in TV, reporters would tell him he should drop his “thick” accent. He refused, which ultimately led him to start Manitowoc Minute.

The show is mostly fun and games, but Berens uses his platform for philanthropic efforts as well. At the end of each episode, for instance, he gives a shout-out to a Wisconsin soldier who’s currently serving. His website also lists a number of Wisconsin charities that he encourages his viewers to support, including the Boys and Girls Club, Clean Wisconsin, Big Brothers Big Sisters and more. And Berens donates a portion of his merchandise sales to Wisconsin charities.

The Special Consensus, a modern classic bluegrass band led by Greg Cahill, will open for Berens and his Oh My Gosh?! comedy show. Nick Dumas, the mandolin player for The Special Consensus, lives in Sturgeon Bay. The band has earned five IBMA awards and two Grammy nominations, including one in 2019.

Wrap up your Fall Fest weekend on Sunday, Oct. 20, 7 pm, at the Door Community Auditorium!

Learn more about Berens’ career at charlieberens.com, and check out his show, Manitowoc Minute, at manitowocminute.com.