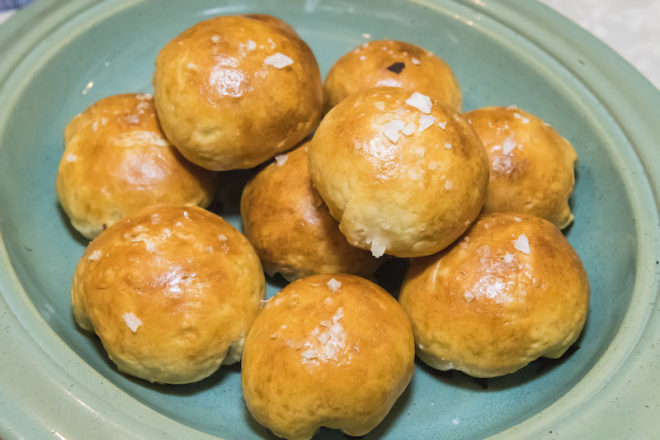 A broad charge was given to me for a recipe in the spring magazine — something with beer.

My first thought was an Irish stew with Guinness. Ah, too easy. Who can’t make a delicious stew?

That’s when the food gods dropped man buns in my lap, so to speak. Yes, I know that is a very weird name for something you want people to put in their mouths, but its connotations were not immediately apparent to me.

When I saw the Bon Appétit headline “man buns,” against the backdrop of a photo of the actual piece of food, I assumed it meant that what we have here is food conceived for manly men, which, of course, is meat conveniently ensconced in a bun. You could grab a couple handfuls of man buns, fill your pockets and hitchhike to Montana if you had to.

Those kind of man buns.

I read the recipe and realized I could easily vamp on meaty filling. I don’t recall what Bon Appétit did for their filling, but I threw a pork butt into a Crock-Pot with beer and onions and garlic, plenty of black pepper and Himalayan pink salt (use whatever salt you like; I’m just saying it’s very easy to find exotic salts these days, and I recommend finding and using them), and followed the dough-making recipe exactly. I assembled the balls o’ meat, dropped them into a pot of boiling water with salt and baking soda for two minutes, topped them with flaked salt and then popped them in the oven.

The result was 10 beautiful pretzel balls of meat. I swear that Bon Appétit recipe never mentioned that the recipe results in a beautiful ball of pretzel.

I could not wait to share the experience in the traditional Door County Living staff get-together for the recipes and foodstuff presented in these pages. We actually do try them out on real, live people!

In advance, I prepared beer-braised pork, beef and corned beef, as well as two batches of dough — one with buttermilk and the other with cashew milk. The original recipe calls for good old regular milk, but I like to mess with recipes. I almost substituted beer for milk, but I’ll reserve that one for home use.

First thing I threw out is that we have to come up with a better name than man buns. After my first batch with pork in the center, I thought Pig in a Pretzel, but then I did the beef and corned beef fillings, so, no, Pig in a Pretzel won’t work.

Then as I was assembling the meaty nuggets, art director Ryan Miller said, “You need hair ties or bobby pins or something.”

Since I was wearing a hat, I wondered why he had this sudden concern about hair getting into the food, because that’s what I thought he was talking about.

Duh! It was probably an hour later when I realized Ryan was referring to the man bun hairstyle and that these meat-pretzel pockets might have been named for them since they sort of look like a man bun nub.

But that would mean we are talking about a hairball, so, yes, this thing needs a new name.

I intended to add sauerkraut to the corned beef version I made for my colleagues, but I knew at least one of them does not like kraut, and I was too lazy to make identifying marks on each pretzel ball.

Once you’ve tasted this boiled and baked dough, you’ll see the possibilities are endless for putting something tasty in the center. How about a tangy coleslaw center? Or a tofu center? Pepperoni pizza? Bacon cheeseburger? How about a pretzel-ensconced bite of homemade General Tso’s chicken? 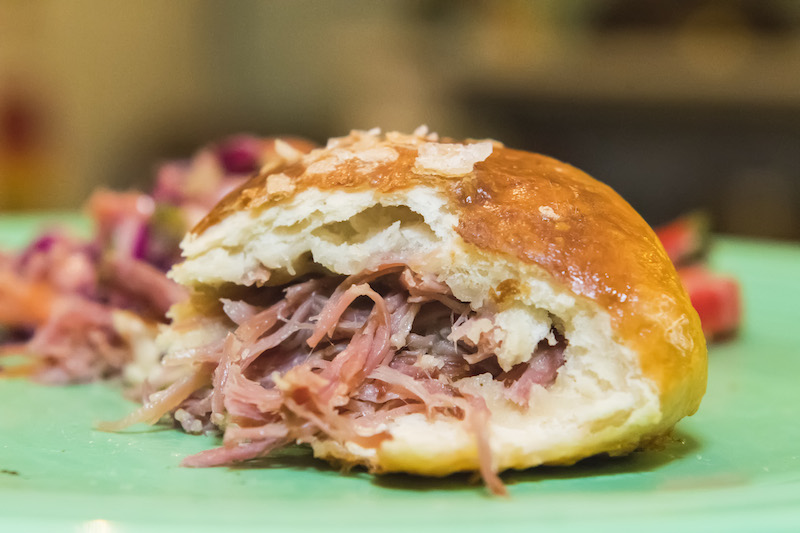 Season meat with salt and pepper. Heat oil over medium-high heat in a Dutch oven or large cast-iron skillet, and cook pork until golden brown on all sides. You can either add the onion and beer to the Dutch oven, cover and place in a preheated 325°F oven until the pork is falling apart, about three hours, or you can place the works in a Crock-Pot and turn it on low for six hours. Let it cool and then shred with forks. The meat can be made up to five days ahead. 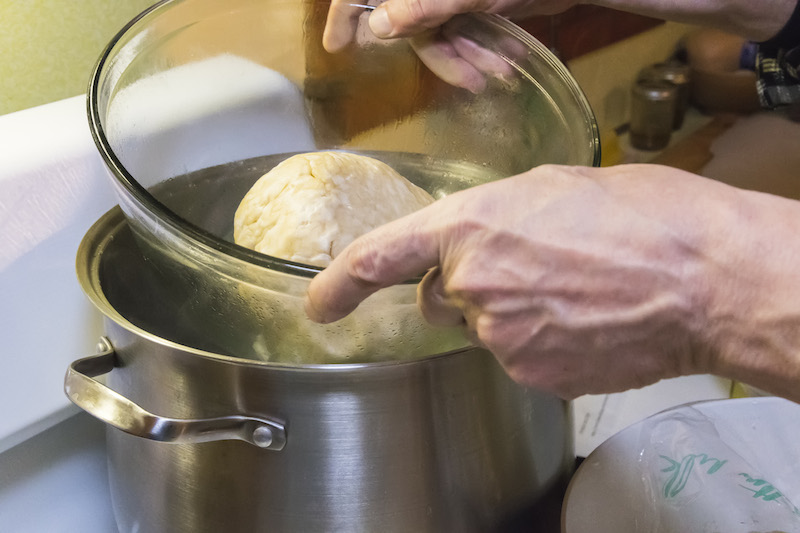 flaky sea salt (such as Maldon)

Preheat oven to 425°F. Gently warm milk in a small saucepan over medium heat until warm (do not let it get hot). Transfer to a bowl and whisk in yeast and brown sugar. Let sit until yeast starts to foam, about five minutes. Add flour, salt, baking powder, and butter and knead until dough is smooth and elastic. (If you have an electric stand mixer for this part of the task, lucky you!)

Lightly coat a medium bowl with nonstick spray and transfer dough to bowl. Cover with plastic wrap and let stand in a warm, draft-free place until doubled in size, up to two hours. You could also cover the dough and chill overnight in the refrigerator.

Divide dough into 10 pieces. Using the palm of your hand, gently roll pieces on an unfloured surface into balls. Loosely cover with plastic wrap and let stand 10 minutes. 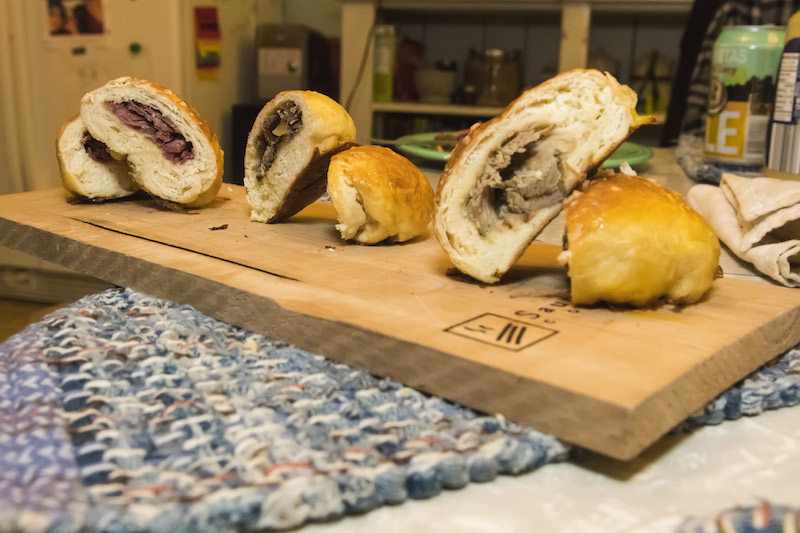 Using the palm of your hand, flatten each ball into three-inch rounds. Place two tablespoons pork filling in the center of each round. Bring up edges and pinch together to create a parcel. Gently roll buns, seam side down, to close.

Line a rimmed baking sheet with parchment paper and spray with nonstick spray.

Boil buns two minutes (they will puff up and float, so don’t crowd the pot). Using a slotted spoon, transfer to prepared baking sheet, spacing about 1½ inches apart.