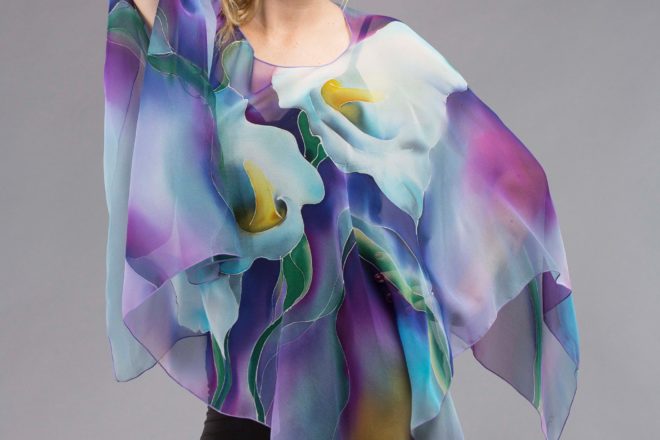 Bazyli Studio Wearable Art in Baileys Harbor features the exquisite painted silks of Joanna Alot Designs. Joanna is a Chicago artist whose patrons include Hillary Rodham Clinton and Chicago’s NBC Channel 5 news team, and can be found in the museum stores of the Smithsonian in Washington, D.C. and the Art Institute of Chicago.

Joanna completed her graduate level studies in art and architecture in Poland and traveled throughout Europe as a student with pencil and paper in tow, honing her drawing and design skills as she visited European cities full of history, architecture and art. The need to travel lightly inspired her to make versatile clothing pieces for herself including scarves, shawls, tops, blouses, dresses and tunics.

After moving to the United States, she refined her craft working with artisan mentors. She started her own line of  wearable silk art in 2002. Now known as Joanna Alot Design Limited, her work can be found in galleries around the country.

Bazyli Studio Wearable Art shows the work of several other wearable artists, a quilt artist, Bazyli Jewelry and the one-of-a-kind clothing designs of resident artist Peter Ciesla. Hours are 10 am to 5 pm Wednesday through Sunday, or by appointment. For more information call 920.839.2526.