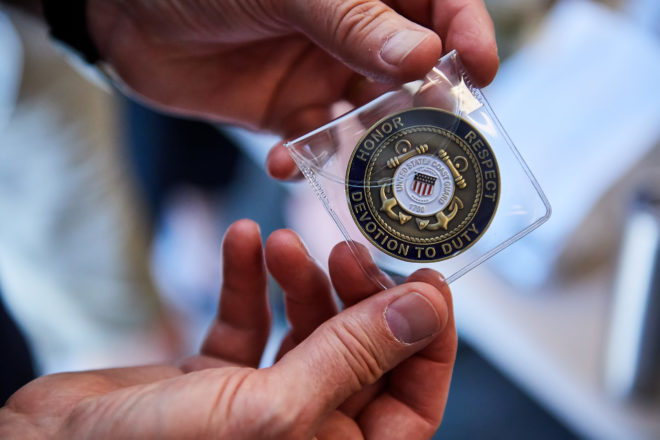 Forty years ago – in 1979 – Sturgeon Bay became the home port of one of nine vessels in a then-new class of Coast Guard icebreaking tugboat when the Mobile Bay arrived with its first crew of 17 men.

“It’s almost unheard of that a ship has been in the same port for 40 years,” said Lawson Brigham, who served as the first commanding officer of the Mobile Bay.

Brigham and most of the original crew were in Sturgeon Bay last week to attend the fourth reunion of the crew since 2004, and even they seemed amazed by what a tight-knit group they are. Since that first gathering, they have met in Sturgeon Bay every five years.

“It’s family – family and lifelong friends,” Brigham said. “The first crews of these ships were always unique and set the ship off on the right course, and I think we did. It still has a great reputation.”

“Here we are, 40 years out, and the whole crew’s still walking and talking,” said Sturgeon Bay resident Tom Baudhuin, the only local who served in that first crew. “That’s pretty amazing. There are a couple guys with health issues kicking in [who] couldn’t make the reunion, but 40 years …”

Several crew members mentioned that serving on the Mobile Bay was the best time of their Coast Guard careers. Several also met their future wives while stationed in Sturgeon Bay, including Keith and Priscilla Kopczynski (they met while bowling at Cherry Lanes) and Dennis and Sally Likens (they met at the Sturgeon Bay Dairy Queen when he was a customer and she was serving him).

The crew took a tour of the 120-foot aids-to-navigation barge that the Mobile Bay uses to change buoys for winter and summer navigation. It is one of only two ships in its class that has been equipped with a barge. Lt. Commander Steve Kingsley, the current captain of the Mobile Bay, led the tour.

Brigham was impressed by Kingsley.

“It’s still a great ship,” he said. “The captain today is colorful and smart and experienced. You could tell the way he interacted with the junior officer and junior personnel. He’s friendly but knows what he’s talking about. A good leader. You can tell.”

After the tour of the barge and some group photos, the crew gathered at the Door County Maritime Museum to share war stories and talk about what being a part of this crew and serving in Sturgeon Bay meant to them.

First and foremost was the Mobile Bay mission.

“We wanted to prove what the ship could do,” Brigham said. “It was in an era when the Coast Guard and the Army Corps and the Great Lakes [businesses] wanted to extend the navigation season. Our responsibility for this miniature icebreaker was to make sure it worked.”

“At the time, the Bay-class cutters were a new phenomenon in the Coast Guard,” said Baudhuin. “Our first winter here, we spent a lot of time underway, just testing the ship’s capabilities. Our captain, during that process, wrote about the icebreaking process. That information is still used today.”

They were glad to know that the Halloween Mobile Bay Haunted Ship continues to this day.

“Several thousand people turned out,” Brigham said. “That was a great community event to break the ice – so to speak – with this new ship.”

Another bond with the community came during a New Year’s Eve search-and-rescue operation when two ice fishers were stranded.

“It is snowing and blowing like you can’t imagine,” Baudhuin said. “You can’t see your hand in front of your face, it’s snowing so hard. We’d push ahead 100 yards, stop and yell for them, and listen.”

A Selvick tug eventually located the fishers, but one of the rescued men was so grateful for the Mobile Bay’s role in the rescue that he started bringing, according to Brigham, apples and alcohol.

“We never saw any of that booze,” one of the crew interjected.

“Then he threw a little party for us at the old Carlsville Roadhouse,” Baudhuin said. “He threw a nice deal for us and said, ‘I can’t tell you how much I appreciate it.’”

“That cemented the bond between the ship and the community,” Brigham said.

There was also an obvious bond between the crew, and the way the stories went, much of that may have had something to do with the man at the helm, Capt. Brigham.

Jim Dunning recalls that when his father died, his wife took a phone call for him. He was sitting in his backyard at the time and told his wife he didn’t want to talk to anyone. She told him he would want to take this call. He was surprised to hear his Mobile Bay CO calling to offer his condolences.

“I’m choking up just talking about it,” Dunning said.

Baudhuin had a similar story.

“The day after Thanksgiving 1980, my dad died,” he said. “They lived right here in town. They had the wake at Davis Funeral Home, which is now Huehns. I’m standing up there on family leave and in full uniform. I didn’t own a suit and didn’t have any money for it. At the stroke of 6 pm, the door opens, and the captain and the entire crew, except for two guys who stayed on the ship, walked in in their dress-blue uniforms. My mother – until the day she died 20 years later – she talked about that all the time, how impressed she was to see those guys. It was just really nice.”

“I got to know his father,” Brigham adds. “He was a World War II veteran, a Marine. He also went to Dartmouth College. A civil engineer, a very bright guy. He was a very nice fellow. Landed on D-Day and survived. We commisserated on that.”

Kim Gaffey also had kudos for the captain’s compassion. He recalled being a 25-year-old with a wife and one-year-old son. The Mobile Bay had late-night duty, and Gaffey was worried about his son, who had the croup.

“He patched me to shore. Normally people don’t do that, but he did,” Gaffey said. “I was always grateful for that.”