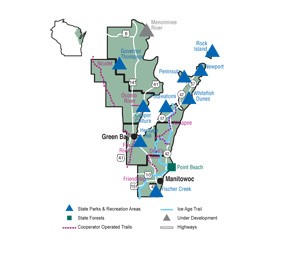 That was one of many nuggets found in the recently released Economic Impacts of the Wisconsin State Park System: Connections to Gateway Communities, co-produced by the Wisconsin Department of Natural Resources Bureau of Parks and Recreation and the University of Wisconsin– Madison Department of Urban and Regional Planning.

The report is an exercise in number crunching, and the results should bring a new appreciation for both the economic and natural resource benefits the park system provides.

For example, total spending by Wisconsin state park properties visitors is more than $1 billion a year.

“Overall what was impressive was the connection between public lands and what draws visitors to a locale, and what the spinoff is, what the economic result is. Those figures are always very interesting,” said Jerry Leiterman, parks supervisor for the Northeast District, which includes Door County. 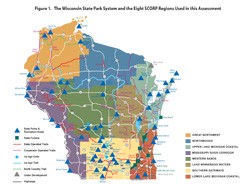 The report authors broke the state down into eight regions. Door County is part of the Upper Lake Michigan Coastal region, and also includes Kewaunee, Manitowoc, Marinette and Oconto counties.

The authors then looked at visitation figures for all 69 state properties for 2005 through 2012 and averaged those to come up with the figures quoted here.

“This study shows how important our state park properties are to the local economies of communities across the state that are gateways to these properties,” Department of Natural Resources Secretary Cathy Stepp said in an announcement that accompanied the release of the report. “Total operational funding for our state park system is less than $25 million a year, so Wisconsin is getting a significant return on its investment from the State Parks System.”

Here are a few key findings:

• The vast majority of spending – nearly 70 percent – comes from visitors to state parks, which account for 45 of the 69 properties studied.

• When combined, the local economic impacts of private sector stimulus in the State Park System regions accounted for more than 8,200 jobs and $350 million in income for Wisconsin residents.

• When visiting properties in the Upper Lake Michigan Coastal region, the largest trip related expenditures are in the lodging and transportation sectors as the majority of visitors are from out of the region. In fact, non-local visitors spend almost three times more than local visitors.

You can read the entire report by searching the DNR website for “parks,” and then clicking on the link for “Reports and more” under the “Documents & publications” tab.