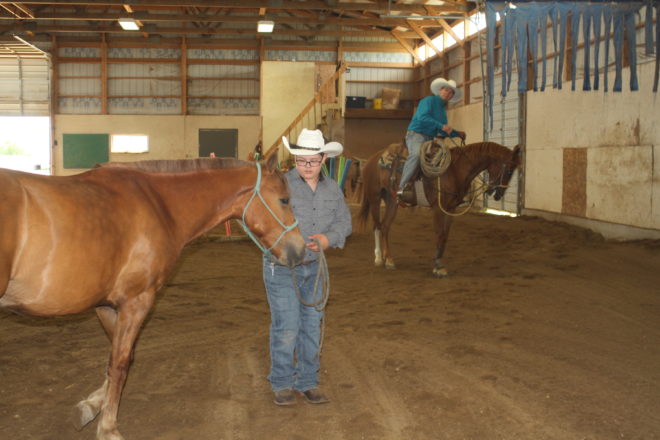 Jesus “Chewy” Jauregui and his 11-year-old son, Fernando, put their mustangs through their paces at their indoor barn on County A in Baileys Harbor in preparation for the Extreme Mustang Makeover competition that will take place virtually June 25-27.

Competitions generally don’t exist to test the things fathers pass on to their children. That’s not the case for Jesus “Chewy” Jauregui, however: He’s handing down his extraordinary skills in working with horses in general, and with wild mustangs in particular.

His two sons –  Fernando, age 11, and Leonardo, age six – are the recipients of those skills, and it’s Chewy’s eldest who will participate in his first competition this month: the Extreme Mustang Makeover.

“Every day we go to sleep and wake up thinking of the kids,” Chewy said. “The most important thing: I want to give a good gift, what I get from my parents, work with animals,” he said. “It gives a good feeling and a lot of things you can teach your kids.”

Horses have been a part of Chewy’s life since he was a kid. When he’s not working as a co-owner of Chewy & Teo Roofing, a full-service roofing and siding business, he’s known in certain circles as Door County’s horse whisperer.

He was one of eight trainers selected from around the country in 2013 for Wild Horse, Wild Ride, a documentary that showcased the featured trainers’ ability to train a wild mustang in 100 days before the Mustang Heritage Foundation’s Extreme Mustang Makeover competition.

This year, that competition has gone virtual, and Chewy and Fernando will film themselves in their indoor barn June 25-27 to showcase how well they’ve transformed mustangs from wild to mild at their ranch on County A in Baileys Harbor.

“Right now I’m not nervous,” Fernando said about his first competition. “I think I might when it’s actually time to compete.”

Fernando will be in seventh grade at Gibraltar in the fall, yet his work with the large animals seems to have taught him a poise well beyond his years. He speaks clearly, politely and with the articulation of a much older boy. His age betrays him only when a beaming smile breaks over his face after hearing these things said to his father.

Fernando began riding a donkey at the age of six before building his confidence and switching to a horse and an American saddle. A quarter horse named Pike has been his regular horse for about five years.

“I chose him, and then I stuck with him because of how we work together,” he said. “If I tell him to do a certain thing, he will do it. The way he moves, I like that, too. And we have a friendship overall.”

That friendship takes time to cultivate.

“It’s like going up to a random person and being his friend, just randomly,” he said. “You have to build up the confidence and have a friendship together.”

Fernando said he’s learned everything he knows from his dad – watching him, asking questions, receiving direction. He’ll take what he’s learned into the virtual competition with a one-year-old mustang filly named Mikala. She won’t be saddle trained until she’s at least two and a half years old, but she’s currently halter and handler broke.

Last Saturday, Mikala followed Fernando around the barn and through the obstacles the Jaureguis had set up. Docile and gentle, her spirit flared from time to time as he put her through her paces, revealing the wild horse she had been only 80 days previously on public rangeland in Nebraska.

Chewy got Mikala from the federal Bureau of Land Management’s (BLM) Wild Horse and Burro Program. The BLM manages the herds on 26.9 million acres of public lands across 10 western states, where herds can increase at a rate of up to 20 percent annually. The BLM controls herd growth through periodically removing excess animals and placing them into private care.

That’s how Chewy has been getting his mustangs since 2008 – a privilege that goes only to those who can pass the government’s trainer application process.

A private owner will adopt Mikala when she’s ready. Chewy has gone through this process with 12 horses, adopting only one of those horses himself. Before they reach the adoption stage, Chewy has gentled, halter broken, saddle trained, built trust and developed a relationship with the animals.

“It takes a lot of skill to train a wild mustang to be social,” he said. “It can be scary. There is a lot of foundation we have to do. I feel great doing the work for someone who will adopt that horse.”

About 75 adult trainers and 25 youths will compete in the upcoming competition. Chewy will participate in three classes, including riding. Fernando will lead Mikala from the ground, showing how well he has bonded with the horse, leading her by halter through obstacles and developing a freestyle performance that’s up to him to develop.

Chewy wishes his son’s first competition didn’t have to be virtual.

“I really wanted my son to be with the other competitors, face to face,” he said. “You need to be around the other kids to see how they’re doing. They can learn more. But now, I feel happy that we’re staying home. We save all the travel.”