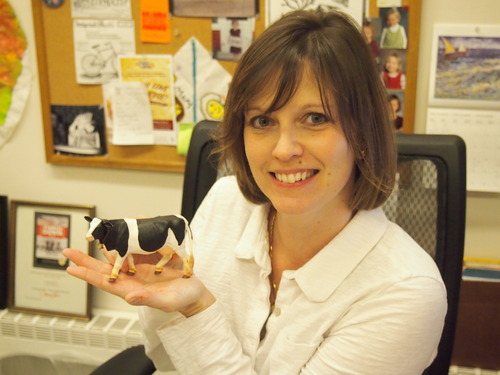 “Books were given as gifts to us as kids, which to me says something about how they’re valued and the importance of them right from the beginning,” Thompson said. “I spent a lot of time as a little kid in the children’s section at the Sturgeon Bay public library, which at that time was in the old building as I think of it. That was a pretty magical place to me as a kid. And the other thing that I think had to have had an influence on me is the bookmobile.”

For 40 years, the Door County Library Bookmobile delivered books to children at schools and villages throughout Door County. It made stops in areas of the peninsula populated with children, which included the corner of County Road TT and Mathey Road – Thompson’s childhood home.

“I was having this amazing bus full of books coming and parking in our driveway once a week during the summer,” Thompson said. “…The driver, Bob Heilman, was the super nice library man and he got to know us so he would have some thoughts about what books I would like. I would go out and get my stack of probably 10 books for the week and go out to the orchard and sit in my little treehouse and read.”

Her love for the process of creating books did not become apparent until her senior year at the University of Wisconsin – Eau Claire, when Thompson, a journalism-advertising and English double-major, took a publishing class.

“We did projects and you began to put together the parts of a book,” she said. “It sort of all fell into place for me that that was what I loved to do, take the written word, pick an idea, pick images, and turn them into something new.”

After graduation, Thompson worked in publishing in Minnesota, Maine and Massachusetts. In 1999, she joined the Wisconsin Historical Society Press and in the nearly two decades since, has served as its managing editor and acquisitions editor. She has been charged with overseeing various print projects, from concept to publication, and has played a pivotal role in establishing relationships with some of the Press’ most recognizable authors.

Thompson is credited with encouraging Jerry Apps, author of stories detailing Wisconsin history and rural life, for putting his story of surviving polio in print form (in the 2013 biography Limping through Life: A Farm Boy’s Polio Memoir). Apps currently has 18 titles with WHS Press.

“He’s a great ambassador for the press and for the Wisconsin Historical Society as well, which is a great thing that grows out of these relationships with authors,” Thompson said. “I think that if the process goes well and they’re happy with that and with the end result, every time they’re out in the world talking about their books they’re representing us and you can’t really measure the benefit that brings to the historical society.”

Among her favorite projects as acquisitions editor was the 2014 biography Little Hawk and the Lone Wolf, a coming-of-age memoir of Menominee Indian Raymond Kaquatosh. The story details his life growing up on the reservation and as a young boy, being sent to an Indian boarding school in Keshena. Contrary to most, Kaquatosh had a good experience during his year away at boarding school. This story is told against the backdrop of an unlikely bond Kaquatosh formed during his youth.

“He had befriended a wolf as a child and he and that wolf became friends and companions through his entire growing up years,” Thompson said.

Even when he left the reservation for school, work and service in the United States Marines, the wolf waited for him. Thompson visited the author at Wisconsin Veterans Home at King and worked with him to tell this story.

“I just think it’s an incredible Wisconsin story and to be able to work in a place where we can find a way on a story that’s very rare to have in print is really an honor,” Thompson said.

As director, she will lead the press’ mission to bring unique Wisconsin stories to general, academic and educational audiences of all ages. Her biggest goal is to establish partnerships with financial partners and cultural organizations throughout the state, and getting the WHS Press out front and center at conferences, meetings and events. Equally important, Thompson strives to create and maintain strong relationships within the small WHS Press team.

“We’re a small team, we work really well together, and it’s definitely a goal of mine to make sure that we continue to feel like everyone has a voice,” she said.

Thompson lives in the Madison area with her husband, Chris, and daughter, Mia. For more on the WHS Press, visit wisconsinhistory.org/whspress.