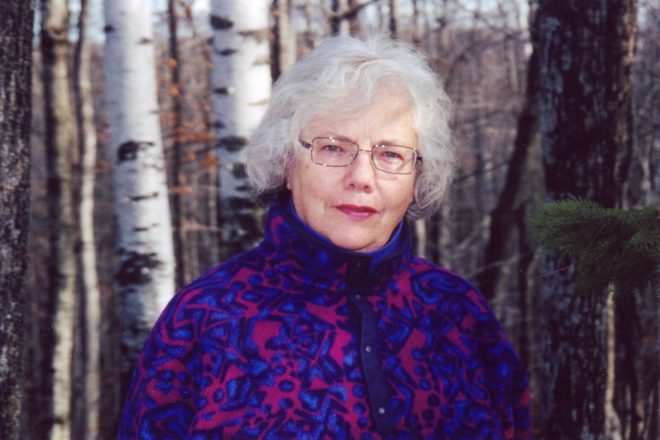 Lauter was appointed poet laureate of Door County for 2013-15, during which time she founded the Door County Poets Collective to publish an anthology, Soundings: Door County in Poetry (Caravaggio Press, 2015). With Francha Barnard, she co-edited the 2017 Wisconsin Poets’ Calendar for WFOP on the theme of water.

Since her retirement from the University of Wisconsin-Oshkosh as chair of the English department, Estella Lauter has reveled in the Door County writing community, publishing four chapbooks with Finishing Line Press (one of them in the New Women’s Voices series) and enjoying membership in three writing workshops. Her poems have earned her awards from the Wisconsin Fellowship of Poets (WFOP), the Wisconsin Writers Association, Fox Cry and the Peninsula Pulse. Lauter tied for first prize in the 2009 Barbara Mandigo Kelly Peace Poetry contest, and her work has been published in several literary journals, including Bramble, Midwest Review, Stoneboat, Free Verse, Verse Wisconsin and Wisconsin People and Ideas. Two poems were nominated for the Pushcart award. Her work has also appeared in several anthologies, including The Nature of Door, Sweeping Beauty and Echolocations.

Her third daughter, premature, was born

in her belly wall, intestines bursting through.

you can have more. But she called her sister Nomi

from upstairs and asked her for clean cloth

to bandage up the baby’s gaping wounds.

While the untimely child hung on, she sewed

buttons on cardboard, lined them with cotton, cut

strips from old sheets to hold the organs in.

Then, lifting the baby between her elbow and palm,

she nestled her broken treasure in a box for boots

and kept her on the oven door of the old wood stove.

All that hot summer and a year, she changed

ever so late into the night with her sister.

for witchcraft. The numbers prime: her third

girl, born in the seventh month of nineteen-

oseven. But she knew neither medicine

nor magic, only the steady, ragged rhythms

of pressing a life together by hand.