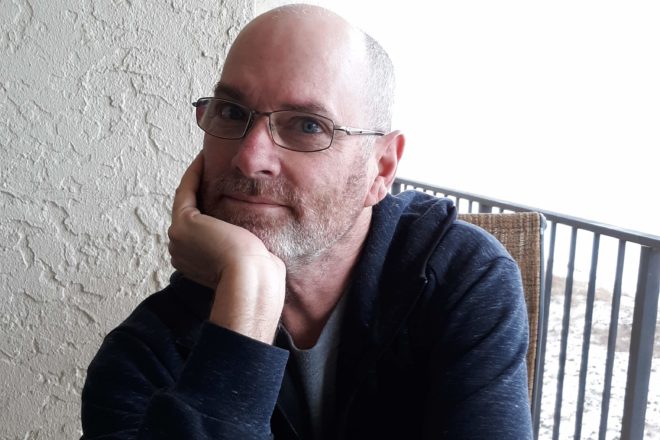 Mike Orlock is a retired high school teacher and coach. He and his wife, Liz, retired to Sturgeon Bay in 2008. He enjoys travel, reading, writing, films and spending time with his two children and five grandchildren.

From 1989 to 2001, Orlock wrote film reviews for the Reporter-Progress newspapers in suburban Chicago and was a contributing member of the Chicago Film Critics Association. His short fiction has appeared in TriQuarterly, the literary journal of Northwestern University; and Another Chicago Magazine. He has twice been honored with Illinois Arts Council Awards for his short fiction. His poetry has appeared on the Your Daily Poem website, in the Wisconsin Fellowship of Poets’ (WFOP) yearly calendars, Verse Wisconsin, the Los Angeles Times, the Blue Heron Review, the Peninsula Pulse and other venues.

In 2014, Orlock won the Wisconsin Writers Association’s Jade Ring Award in the Free Verse category; and in 2016, he won the WFOP Muse Prize. He is a member of Door County’s Unabridged poetry group. Orlock has released two books of poetry this year: You Can Get Here from There: Poems of Door County & Other Places and Poetry Apocalypse & Selected Verse. He describes his poetry as “light verse with a twist of irony.”

When my students needed him most,

Walt Whitman was nowhere to be found.

He’d resided for the longest time

in the section on “Post-Civil War Literature,”

of Emily Dickinson and three excerpts from

in these troubled times); but when students were asked

to turn to him for an example of vernacular

free verse, all they found was space

empty as the American plains in those days

where Whitman, shaggy as any buffalo, roamed.

his legacy away. After all, a man in his boots,

so used to wandering, had to feel impatient

that a new world so alive with song

had relegated him to the silence of stuffy libraries

and textbooks thick as headstones.

There was grass out there to be contemplated

and hawks aloft to admire. Still,

when I directed my students to the designated page,

where together I intended to Sing the Body

Electric with them, eleventh graders

I never expected Whitman would have ditched my class

(along with two chronic truants whom I hadn’t seen

in weeks) by abandoning the hallowed space

that Houghton Mifflin Harcourt had reserved especially for him.

What does one do when an American poet goes missing?

Especially one as unpredictable and iconoclastic

as Walt Whitman? To be honest,

my students thought it was “kinda cool” that some long dead

dude had “booked” for parts unknown

in a text few of them had ever bothered to open.

It became a game of “Where’s Walto?” for the remainder

of the period: Was he “kickin’ it” with the Realists,

some seventy years down that long literary highway from home?

In the end, it was “Spacey” Staci, the day-dreamer

at the back of the first row, who found him

just before the dismissal bell,

hiding among the Contemporaries.

He was sitting on a stone wall,

bathed in the gold light of a late afternoon,

examining an apple Robert Frost had just tossed him

from the second step of a ladder.

Both looked so comfortable in the other’s company

we left them there to their musings,

and, so as not to disturb them,