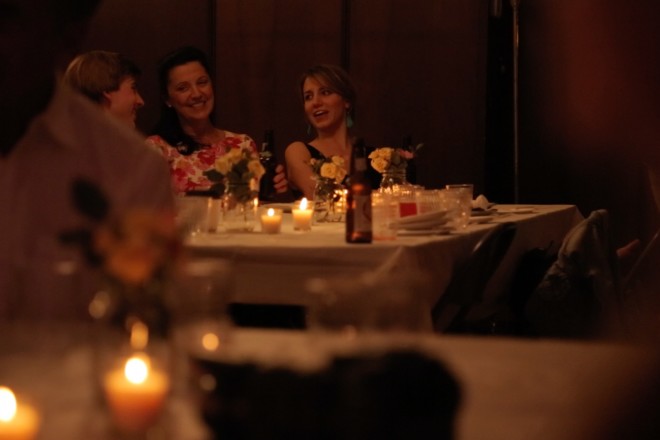 Evan Board, Claire Morkin, and Rebecca Weaver as the family at the wedding reception.

When Rebecca Weaver wrote June Falling Down for a creative writing class in college, she remembered thinking, “This would be much better as a movie.”

Over the past several years, she has developed the short story into a screenplay.

“I basically wrote it knowing I wanted to make it in Door County,” she said.

After years of imagining her story inside Nelson’s Hardware, the Ice Cream Factory, and the Town Hall Bakery, last summer she and her assistant director and boyfriend Chris Irwin decided to give feature filmmaking a try. 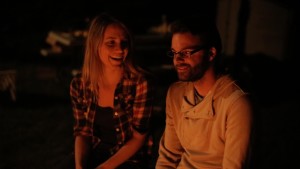 “We are a team together,” she said. “We definitely weren’t ready to make a feature film, but we had the resources of Door County. We knew a couple actors that had mentioned to me that they would be in a movie if I made one, and that’s how we got started.”

Rebecca, who grew up in Neenah, spent many summers at her family’s home in Baileys Harbor. She worked at the Ice Cream Factory, Door Shakespeare and the Town Hall Bakery, where the rehearsal dinner scene of the movie was filmed.

The comedy/drama story follows a young woman, June, as she returns to Wisconsin for the wedding of her childhood best friend, Harley. Harley’s wedding coincides with the one-year anniversary of her father’s death. The story also has a very personal connection to Weaver, who lost her father to cancer in 2009.

Over the course of the summer of 2014, 90 percent of the movie was filmed in Door County. Rebecca was able to film in every location in her script, including the Blue Ox, Nelson’s Hardware, Ephraim Village Hall, the Town Hall Bakery, and AC Tap.

“Everybody was so wonderful and really sweet about it. Sometimes we filmed when businesses were open but generally we filmed when they were closed. I have to say I couldn’t be more grateful to these businesses because they add so much charm to the movie,” she said.

Less than 10 percent of the film takes place in San Francisco, where she filmed last September and October. 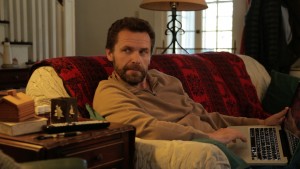 Rebecca has set up an Indiegogo crowdfunding campaign to raise money for post-production, and as of Sept. 11, 2015 has raised 55 percent of her $5,000 dollar goal.

Contributors of $100 or more to the campaign are invited to the initial screening at 7 pm on Saturday, Sept. 19 at Camp David in Fish Creek. Cast, crew and volunteers will also be present.

For more information about June Falling Down, visit SilverLeafFilms.net.