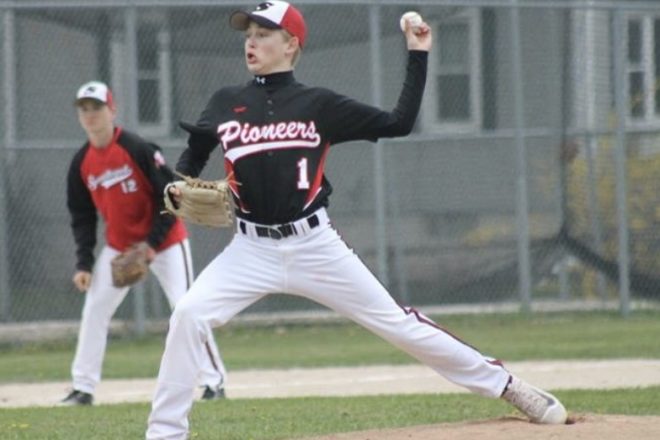 Robbie Pollman had 9 strikeouts to lead the Pioneers to a !2-0 victory over Algoma High School. Submitted.

“At about the third inning I knew I was pitching well,” said Pollman, who said he threw a couple of no-hitters while playing Cal Ripken League baseball. “I felt I could keep the no-hitter going.”

Pollman helped himself out with two RBIs. Jacob Pfleiger, Jaden Sawyer and Ethan Kroll each had two hits. Nathan Stenzel had three RBIs and Jack De Young added an RBI.

Pollman had two hits and Sawyer had an RBI. De Young pitched five innings and struck out two batters.

Starr scored in the first minute and added two more goals in the first half to give the Clippers a 3-0 lead at halftime. Anna Fischer closed out the scoring with a goal early in the second half. Goalkeeper McKenna Gibson made one save.

“This was a nice win for our team,” Clippers coach Bob Desotelle said. “We were able to give our young players some minutes tonight.”

Molly Banks scored the winning goal in the 40th minute. Reetika Jandu scored in the 83rd minute and Banks added another goal shortly before the game ended. Stephanie Beemann recorded her first shutout of the season.

“[Our] defense and midfield played fantastic,” Gibraltar coach Chad Andreae said. “It was a tremendous team effort and a great start to Packerland play.”