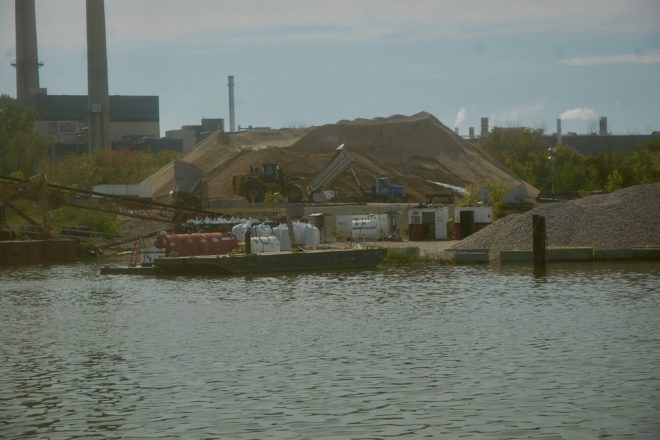 A view of one area of Green Bay’s three-mile stretch of working port activity. Photo by Jim Lundstrom.

Commercial ports of the Great Lakes were the subject of the Lake Michigan Stakeholders’ fall meeting on Sept. 17, and because it was held in Green Bay, the focus was on that port city’s diverse commercial shipping history.

The Lake Michigan Stakeholders group was formed to address the ongoing threat of invasive species and the many other mostly human-derived threats to one of the world’s greatest resources. It brings together representatives from a variety of agencies that deal with lake and environmental issues in order to share up-to-date information about Lake Michigan and the other Great Lakes.

A diverse group of presentations dominated the morning session at a very noisy Neville Public Museum. (A floor on the second story was being ground with an extremely obnoxious-sounding machine directly above the conference room where the meeting was held; at times it felt as though it was grinding my brain and not the floor above.)

Several of the presenters pointed out that although shipping by boat is one of the oldest modes of transporting goods, it remains the most cost-effective and sustainable means of transportation available. According to the Lake Carriers Association, one gallon of fuel will move one ton of cargo 607 miles.

However, the presenters also pointed out that there have been some unintended consequences since the 1959 opening of the Soo Locks, which opened the Great Lakes to foreign vessels – or “salties” – through the St. Lawrence Seaway. Contained in their ballast tanks were species native to their home ports but foreign to the Great Lakes. Since then, a host of invasive species has changed the ecosystem of the Great Lakes several times, at great cost to local, state and national governments that almost render the cost-effectiveness of shipping a moot point.

Brown County Executive Troy Streckenbach kicked things off with a welcome and a snapshot of the county’s commitment to reducing the pollution that has caused the dead zone in the Bay of Green Bay.

“We need to be doing everything we can to protect the Great Lakes,” he said.

Education and collaboration are two of the tools the county holds in its toolbox.

Streckenbach said the conversation began with rural farmers about the need to reduce phosphorus runoff from their fields, which ran into the Fox River and its tributaries, which empties into Green Bay. Phosphorus runoff – not just from farms, but from urban applications as well – is what helped to create the hypoxic (oxygen-deprived) zone in Green Bay.

Those conversations led to the understanding that the county needed to educate the public about how important it is to protect water and to talk about how human activity on land affects bodies of water.

All of this led to the March 2019 signing of the Northeast Wisconsin Water Quality Pact, a collaborative effort to become greener communities for the sake of the water and future generations. Signatories were Brown, Fond du Lac, Outagamie and Winnebago counties and the Oneida Nation.

The ultimate goal of the pact, Streckenbach said, is significant phosphorus reduction before mid-century.

Next up was Captain Greg Stamatelakys, who introduced himself as a “boat driver, not a scholar.” However, one of the boats he has driven for the past 15 years is the R/V Neeksay, a 1953 steel-hulled U.S. Army T-boat that has been converted to serve as the primary research vessel of UW-Milwaukee’s School of Freshwater Science.

The Neeksay conducts a wide variety of research on Lake Michigan issues, from plankton and other native species (“Plankton numbers are way down,” Stamatelakys said) to mud and what’s in it. Much of that work is done in the Bay of Green Bay, including near Sturgeon Bay. (The Neeksay will be on a mission next month that will take it to Sturgeon Bay for a day.)

In addition to his firsthand knowledge of the research being conducted on Lake Michigan, Stamatelakys also has a firm grasp on the history of commercial shipping on the lakes, and he mentioned that he even spent a brief stint as a deckhand on an iron-ore carrier.

Today, he said, there are 63 commercial ports on the Great Lakes, moving 170 million tons of goods annually just on lakers alone. However, there is heady competition for fast delivery, and shipping by boat is not always the fastest means, which could explain the results of a joint American-Canadian study that found Great Lakes and St. Lawrence Seaway ports are operating at an estimated 50 percent capacity.

Stamatelakys was the first to mention the ballast-water problem of the salties, which are responsible for many of the 184 invasive species (and counting) that have been introduced into the Great Lakes. Despite being an extremely efficient form of transportation, he said, “The value of this shipping could be eliminated because the costs of invasives is so much greater.”

He added that an environmentally sound solution is likely to be found for the ballast-water problem, but as with the solution to most human-made problems, “It’s just going to cost money.”

Stamatelakys also mentioned the recent news that Fincantieri Bay Shipbuilding in Sturgeon Bay has contracted with the Interlake Steamship Company to build the first new lake carrier vessel since the 1980s. He said it is being built specifically to haul salt – the kind used to deal with icy roads and sidewalks.

And, as we learned from the next speaker, Mark Walter, who’s the business-development manager for the Port of Green Bay, salt is a significant commodity at the Green Bay port. When you see black-plastic-covered mounds at port businesses, it is usually salt underneath. Unlike some of the other port-moved commodities such as coal and limestone, salt doesn’t mix well with rain.

The 14 businesses move more than two million tons of cargo on more than 200 ships each year, with an estimated annual economic impact of $147 million.

During the late 1800s, Green Bay was the largest flour-exporting port on the Great Lakes, but industry changes and the prominence of railroads forced the port to adapt again. By the 1930s, it had moved from exporting goods to the rest of the world to importing bulk commodities such as coal and petroleum coke for regional manufacturers.

It continues today mainly as an import port, but Walter said it is constantly looking for ways to export more from northeastern Wisconsin – especially as a way to attract salties to the port.

“They want to leave with something,” he said.

“It’s declining in use, but it’s still one of the biggest commodities moved,” he said.

Walter said the port has seen a major increase in petroleum products shipped in since the 110-mile fuel pipeline between Milwaukee and Green Bay was shut down in 2016 when its owner, West Shore Pipe Line Company, decided it was not worth repairing the 56-year-old gas and diesel fuel line.

Walter said salt and limestone shipments have also gone up at the port. Cement and liquid asphalt for construction and road building in the region are two other imports to Green Bay, while tallow from area meat-packing plants remains an export.

Although Green Bay – like most Great Lakes ports – does no container shipping at this time, Walter said the port staff and port businesses are working to make that happen.