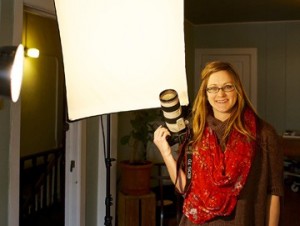 Portraitist Kelly Avenson has her own portrait taken by Len Villano.

“I was the friend in middle school who always had the camera,” laughs Kelly Avenson. Now 29, and owner of Avenson Photography in Sturgeon Bay, she’s still the one with the camera, shooting portraits of families, children, graduates, and more. A native of Oelwein, Iowa, Avenson has a degree in portraiture and photojournalism. But taking pictures wasn’t always Avenson’s dream: “Since the age of eight, I wanted to be an architect.” She attended Iowa State University, where she switched majors several times before realizing that her love for photography just wouldn’t loosen its grip on her. “At home, both of the doors in my closet were just covered with photos and memories” she says. “I just kept coming back to it.”

Avenson arrived in Door County in 2007 when she was hired as the last intern for the Door County Advocate. After a four-month stint with the paper, she left the county – briefly – to take a job at the Telegraph-Herald in Dubuque. That experience taught her that news reporting photography wasn’t her cup of tea, and she returned to Door County and hung up a shingle as Avenson Photography. 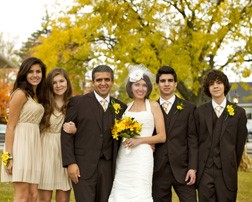 Then, in 2010, Avenson made the commitment to pursue her craft full-time. “And that’s when it became full time,” she says. For her, the best part of the job is the people she gets to meet. “I’ve shot ceremonies where couples are renewing their vows after 25 years, and a family reunion that was organized by the grandmother who had just received a cancer diagnosis,” she says. “And I get to capture these amazing moments for them.”

“I love hearing people’s stories,” she continues. “Seeing young couples getting married, I think ‘Someday their kids will be looking at a photo that I took.’ That’s so cool.”

Avenson enjoys working with all of her clients, but especially with children: “You have about 10 minutes to keep their attention, and anything goes.” Some of her favorite portraits have captured expressions that are a far cry from the perfect docile smile. “I’m not trying to create the perfect portrait,” she say, “I’m trying to capture the perfect expression that really reflects the person.” 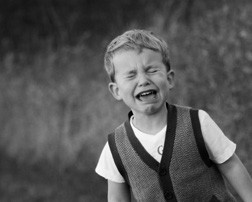 Avenson also seeks to continually refine her craft, and to inspire others to do the same. She recently created a Facebook page called Create.Share.Inspire. The site has drawn photographers from all walks of life, professional and amateur, who challenge each other with assignments such as ‘Depict Your New Year’s Eve’ and ‘Capture Your Hometown’ and then give feedback on each other’s work. “I missed the classroom, the critiques, looking at work in a different light,” says Avenson. “This is a chance for me to grow.”

In addition to operating her photography business, Avenson Photography, Avenson is proprietor of Greco Gallery, a cooperative space which houses the artwork of a growing number of Door County artists working in media from paint to jewelry to textiles. “Having the gallery here has brought in photography clients, and vice-versa,” she says. “And coming into the gallery can really light a fire under someone’s creativity.”

Avenson rented the gallery space, located on North Third Avenue in the heart of Sturgeon Bay, for several years before purchasing the building in 2012 with her fiancée Elliot Goettleman. The two-story brick building houses the gallery, photo studio, and Goettleman’s firm, Green Door Drafting. “Since we bought the building, we both have a new level of dedication to our own businesses,” says Avenson. “We’re vested in the county. And it’s so important to be on Third Avenue. Sturgeon Bay is the perfect place to create art year-round.” 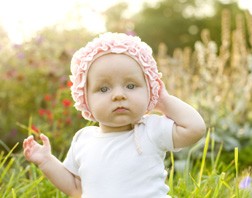