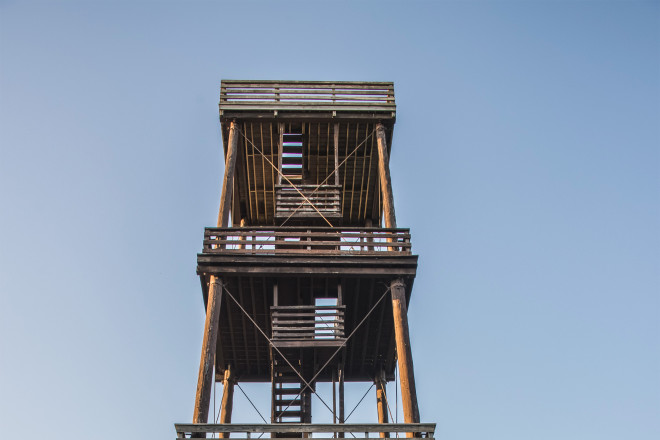 At a June 9 meeting of the newly formed Eagle Tower Fund Committee, representatives from the Department of Natural Resources (DNR) and Peninsula State Park laid out the plan for a new tower on Eagle Bluff. Without hope of repairing the current tower, the DNR set a goal of a new structure opening by the end of 2017.

“Peninsula State Park is the most iconic we have in our system,” said Ben Bergey, Director of Wisconsin State Parks. “Not only because of the community and the tie that the community has to the park, we don’t see that many places. The visitor comes for generations, there’s an ownership of the park.”

That ownership will be trusted as a local fundraising effort will bypass funding from the state to rebuild the tower.

“The question that comes up is, ‘Why can’t the state just pay for it?’” said Representative Joel Kitchens. “Through this process some groups felt raising the money locally was the way to go. Certainly it will happen a lot more quickly than if we have to go through the state budget process and this way we’ll have more local control over it.”

For state funding, the project would have to be inserted into the six-year capital development plan and likely be included in the state budget. The legislature does not meet again until this winter, which would stall any updates on funding until then.

“In order to move forward, we’re going to have to take the tower down, assess the wood members and rebuild from there,” said Bergey.

That process will begin on June 10, with a laser survey of the structure. There are no remaining blueprints of the tower as it stands today. Engineers will climb to each level of the tower and use laser imaging to obtain measurements and create a survey to use when the tower is rebuilt as close to its current structure as possible.

While the new tower will closely resemble the current structure, the DNR is still determining compliance with the Americans with Disabilities Act (ADA).

“With observation towers, they are recreation features, there really isn’t any strict ADA guidelines over towers,” said Missy VanLanduyt, capital development coordinator with the DNR. “It’s also not qualified as a facility, so it doesn’t meet the new 2010 ADA laws. So it lies somewhere in the middle.”

VanLanduyt said the DNR surveyed state park systems across the country to see if any had built observation towers in the last 20 years that were ADA compliant. All respondents said they were not building new observation towers, but there were some creative ways to achieve ADA compliance such as separate viewing platforms and cameras at the top of the tower.

The separate pieces will be moved to another location within the park, where Bob Ross and his team will test the wood to see how much can be used in the new structure.

“It was significantly deteriorated and we had to do something about it for safety issues,” said Ross, Research Engineer with the U.S. Forest Service. “We’re going to test every one of those sticks of wood.”

The DNR has set a rough price estimate of $750,000, but that number is dependent on ADA compliance and any other variables that might arise through the building process.

But the Friends of Peninsula State Park (Friends) are using their nonprofit status to start accepting donations immediately, already registering $5,000. Donations will function as a tax-deductible donation to the Friends. When the funds are raised, the Friends will donate that money to the DNR to use for rebuilding Eagle Tower.

Peninsula State Park Superintendent Kelli Bruns is hoping to use the spotlight as an educational opportunity for the public and visitors to the park.

“I look at this as an opportunity to continue that story when we talk about the tower that was at Sven’s Bluff and the original tower at Eagle Bluff,” said Bruns. “We’d like to set up some different viewing areas some different programs so people can come in and watch this process unfold.”

Donations can be made online at www.eagletowerfund.weebly.com or through a check made out to Eagle Tower Fund and sent to PO Box 353, Egg Harbor, WI 54209.