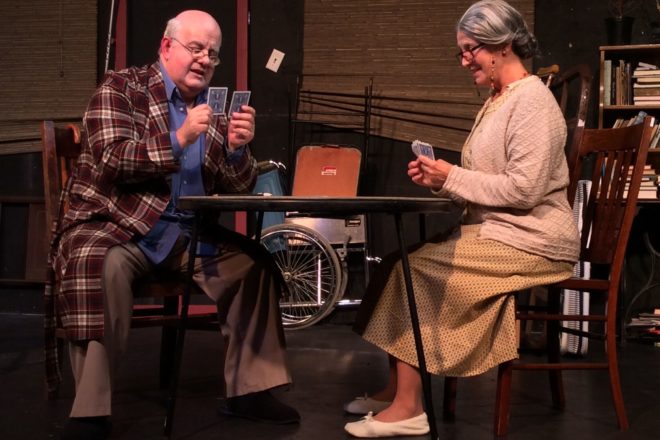 Weller Martin (Drew Brhel) decides what to discard in ‘The Gin Game’ (with Claire Morkin as Fonsia Dorsey), now through Oct. 16 at Third Avenue Playhouse. Photo by Ed DiMaio.

The New York Times called The Gin Game “the closest thing the theatre offers to a duel at 10 paces.”

It was Donald L. Coburn’s first play, and it won the Pulitzer Prize for Drama and the Tony Award as the best play of 1978. Mike Nichols directed Hume Cronyn and Jessica Tandy in that Broadway production of the two-person, two-act show about residents of a nursing home that one of them calls “the slum.” After 516 performances to rave reviews, there was a triumphant tour of nine other U.S. cities, England and the Soviet Union.

Other noted actors who have starred in the play are E. G. Marshall and Maureen Stapleton, who succeeded Cronyn and Tandy in the original Broadway run, Charles Durning and Julie Harris in a 1997 revival on Broadway that received several Tony nominations, and James Earl Jones and Cicely Tyson in the most recent revival last year. Since its debut, the play has been performed in nearly every country in the western world, plus Australia, Japan and China.

And now The Gin Game has come to Door County. As one of the cast members noted, “This show has legs.” It will conclude a six-week run on Oct. 16 at Third Avenue Playhouse (TAP) in Sturgeon Bay.

It’s a play that’s difficult to classify. After the opening night of a pre-Broadway performance in California, Coburn was stunned to read the first review. “Caught between anger and dismay, I burst into the tiny theater office,” he recalled much later. “They’re calling my play a comedy-drama,” he shouted. “That’s crazy! People are going to come here expecting to laugh.”

Coburn did write a drama, but like the drama of life itself, there are many laughs – albeit wry ones – along the way. He finally conceded that the play was properly billed as a Tragi-Comedy, like the Greek classics that, while emotionally draining, provide a catharsis. 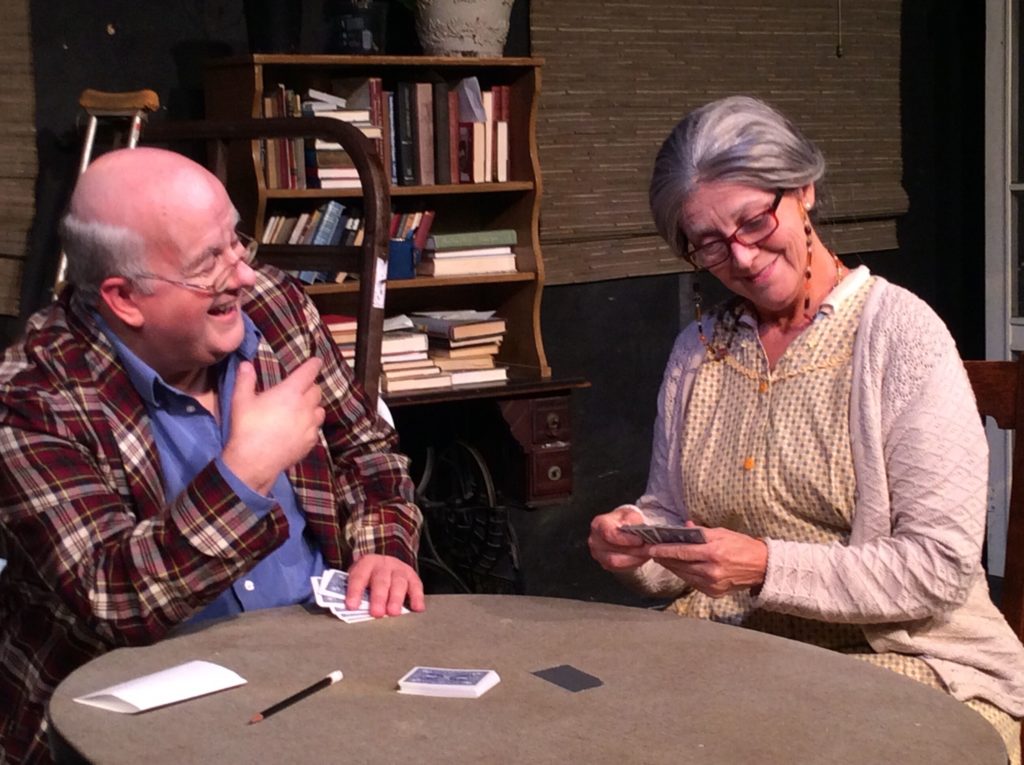 TAP’s production of The Gin Game is directed by Robert Boles, co-artistic director of the theater, along with James Valcq, since 2011. Boles is experienced in every aspect of theater – 32 years on and off Broadway, on TV and in films, an award-winning playwright, a regional chair for the national playwriting program of the Kennedy Center American College Theatre Festival and, immediately before moving to Sturgeon Bay, six years as the creator and director of the theater program at the University of New Haven in Connecticut. This is the twelfth production he has directed at TAP.

“The Gin Game requires a tremendous amount of trust and intimacy between the actors,” Boles said. “It’s the story of two elderly people trying to live out their remaining years with dignity in spite of living in less-than-ideal circumstances. Weller Martin and Fonsia Dorsey engage in conversations about their absent families and what they did in their earlier lives. They seek to find a connection, but the traits that isolated each of them in earlier years and put them, friendless, in an old-age home, continue to isolate them. Although there is unspoken fondness, little by little, each conversation becomes a battle, both of them trying to expose the other’s weaknesses, to belittle the other’s life and to humiliate one another.”

Boles said that casting Drew Brhel and Claire Morkin was easy. Brhel is TAP’s Artist-in-Residence this year, and Morkin is in her fifth season with the theater company. Both have acted professionally all over the country for 30 years. They have known one another for a long time and worked together at Next Act Theatre in Milwaukee.

“There’s something about these two that uniquely fits this play,” Boles said. “When I was thinking of something they could do together, The Gin Game immediately popped into my mind. They’re a perfect match for this tour de force.”

Boles’ directing style is based on something he learned long ago – treating the actors as though he’d hired the “dream team” – and letting them find the best way to use their skill sets and experience. 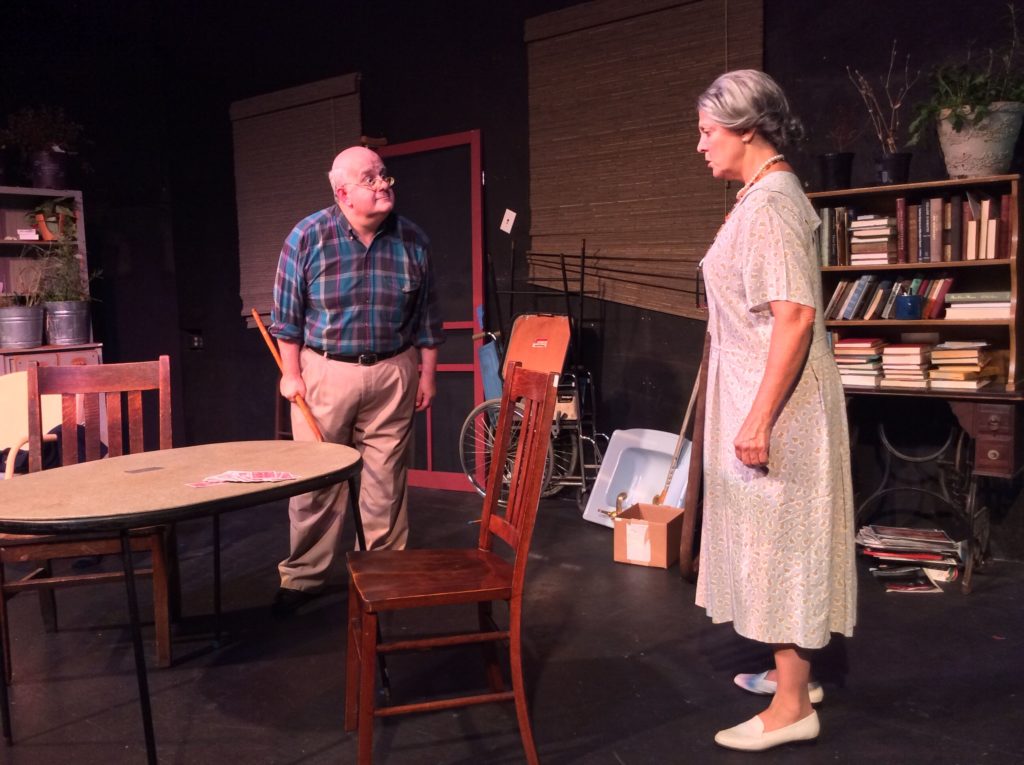 “I wouldn’t begin a rehearsal by telling them how to approach a role,” he says, “and any actor I’m working with deserves the same courtesy. It’s exciting for me to watch good actors discover things about their character.”

“With Bob, there’s never a feeling of being pushed,” Brhel said. “He trusts us to arrive at something that works and is powerful. I’d known about this play for years and felt it was pretty simple, but it’s deceptively so. I can’t remember another character who is so on the edge between likeable and unlikeable. I think the audience is mostly rooting against Weller. I keep trying to find a good side to his character.”

“Bob is wonderful. He allows us freedom,” said Morkin, who finds Fonsia fascinating. “Like so many of the aging, she has no family or friends. She’s on her own, at a loss for finances and lonely. In Weller, she finds a cohort to spend time with, someone to engage with who makes her feel noticed.”

Boles noted that, like other small-cast shows, The Gin Game seems to especially resonate with the audience. “Many of the people seeing this show,” he said, “know these characters. Their reaction is spontaneous and very honest. They not only enjoy the lighter moments of the play, but also recognize the darker side of life. Many of them are exhilarated – almost bouncing off the walls – when they talk with us in the lobby after the performance. They appreciate the fact that it’s so true to life, that the playwright was honest and brave enough to know that there could be no bright ending for the characters.”

Performances of The Gin Game are at 7:30pm Wednesday through Saturday and 2pm Sunday at Third Avenue Playhouse, 239 N. Third Ave. The daytime box office, across the street at 234 N. Third Ave., is open noon to 5pm, Tuesday through Friday. Call 920.743.1760. The box office at the theater is open an hour before show time, noon to 5 pm on Saturday and noon to show time on Sunday.