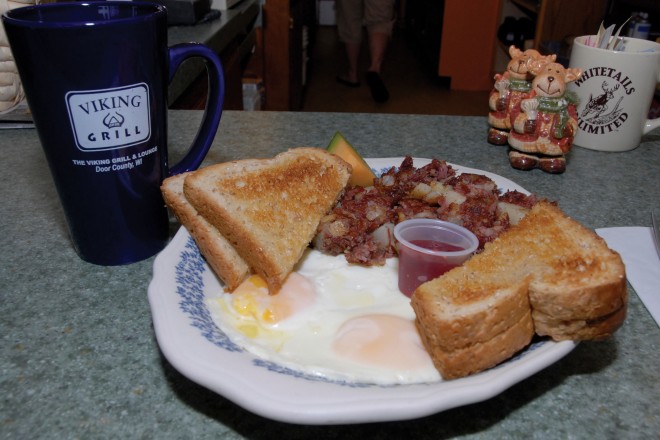 The byways of Door County were once dotted with drive-in restaurants, supper clubs, and greasy spoons that served cheap, home-cooked grub to the farmers, fruit-pickers, and families who flocked to the peninsula’s cooling shores. Over time their numbers have dwindled or styles changed to cater to the desires of a new clientele and compensate for the ever-increasing cost of doing business on prime real estate, but there remains a handful that can rightfully, and proudly, lay claim to the greasy spoon label.

The Viking Grill has been an Ellison Bay mainstay for decades, the hub of one of the peninsula’s northernmost communities. A few strides from the county’s eastern shore sits the Sandpiper in Baileys Harbor, home to some of the most generous breakfast portions  you’re  likely to encounter anywhere. And finally, just south of Sturgeon Bay lies the Morning Glory restaurant, perhaps the most diner-esque joint remaining on the peninsula.

These restaurants don’t awe you upon entering. As one admirer of such locales put it, “Some greasy spoons are very good, some are very bad. Most are certainly very ugly.” These three have much in common, each heavy on the wood tones, each complete with a newspaper stand beside the front door, and each with a breakfast counter of prized stools. They’re the places you could picture a baseball team frequenting after a game in full uniform, dirt on the pants, cleats clicking on the floor, without looking the least bit out of place.

In Ellison Bay, The Viking honors the earliest traditions of the British greasy spoons, which fed the truck drivers and served as convenient meeting places for trade union members. “We get the Lions Club, Kiwanis Club, the Ellison Bay Service Club, Top of the Thumb – pretty much all the Ellison Bay organizations meet here at some time or another,” says waitress Wendy Smith. Then there’s the informal news trade thriving at the counter among patrons, or bartered between waitress and customer during coffee refills. The Viking often serves as the vetting place for ideas and opinions, and those who don’t come to get the local buzz swing in for the much-praised food.

“They come back for three things – our corned beef hash, our eggs Benedict, and our Swedish pancakes,” Smith says. Owner Dan Peterson has won several awards for his corned beef hash at Norsk Høstfest, the largest Scandinavian cultural festival in North America, held in Minot, North Dakota, and the Viking’s Bloody Marys deserve mention as some of the best on the peninsula.

If the Viking is known as a place where locals gather, the Sandpiper is where they gather when only the fullest plate will do. A term traced to Britain that gained popularity in the midst of the Roaring Twenties, greasy spoon was originally used to “imply a less than rigorous approach to hygiene and dishwashing.” It has long been synonymous with working class America, but one thing the phrase has never been associated with is the health-conscious eater.

A greasy spoon wouldn’t be worthy of the name if it didn’t offer at least one menu item inspiring the diner to think, “That cannot possibly be good for me.” At the Sandpiper the brat patty fills the bill, daring you to start your day with a sunrise version of Wisconsin’s finest.

The patty can easily be overlooked on a breakfast menu that does so little to narrow down your choices as to deem itself unnecessary. Owner Donn Valenti may want to consider ditching the menu altogether and simply instruct his servers to ask patrons, “What do you want?” – for his kitchen can likely produce whatever is asked.

There’s the usual breakfast fare, but also crepes, specialty omelets, plate-devouring skillets, and pancakes bigger than anybody has any right to consume in a single sitting. Coffee is delivered in a bottomless carafe – no messing around – and the giant bowl of butter packets and creamers sitting on each table instruct you not to be shy on the dairy. Rare must be the man who manages to leave the Sandpiper hungry, and that’s the way Valenti likes it.

Heading south to the Morning Glory in Sturgeon Bay is a bit like leaving Door County. If any of these three establishments fit the classic diner label, this would be the one. From the gravel driveway to the non-descript façade, to the astonishingly low prices on the menu, the entire experience feels like stepping back to a 1987 version of Door County.

A couple eggs, sausage, and potatoes will run you less than five bucks (and you can get a side of tater tots), and it’s the type of place where the barrier between kitchen and dining room is nominal at best. From the efficiently-sized table (the absolute minimum amount of space on which two people could eat a meal) where I sat with my girlfriend on a Sunday morning in mid-May, we could hear the eggs hit the grill and catch bits of the kitchen chatter one only understands if they’ve worked in one.

Like our previous two stops, the plates at the Morning Glory must suffer an inferiority complex at the hands of the food, which spills over its barely adequate confines. The butter is slapped on the homemade toast so heavy it’s as if a bitter cook is still making up for World War II rationing, but the bread invites you not to care.

As I dove into a mound of egg, ham, hash browns, and cheese, a waitress half-hollered across the breakfast counter to another, “You goin’ to the game after work?” She was referring to the Door County League amateur baseball game, and here she didn’t have to clarify – on summer Sundays it’s the only game in this small town, and the question seemed a mere formality. Of course she was going.

These are the kind of restaurants that get famous in presidential election years, when suddenly everyone cares about the opinion of the average working American. The politicians and reporters may not know where the typical American actually works, lives, or goes for entertainment, but at least they know where she eats. At places like these, where the menus aren’t fancy, save for a dose of clip art, there’s no attempt to be anything more than they are  – the personification of an honest business, the menu items listed exactly as they’ll appear, the prices reasonable, and everything served with a side of simple conversation.

Greasy spoons make me feel oddly content, just knowing a few are still around. In a generation of suburban conformity we find ourselves immortalizing diners, outdoor theaters and other fading favorites in coffee table books and on websites.

Maybe we should just visit the ones we have left a little more often. Pull up a stool, listen in, and just try to clean a plate.