The students of Gibraltar High School dispersed throughout the school, and the county, on the morning of Feb. 20 to take part in their respective Exposure to Creativity workshops, led by dozens of Door County artists – from musician Katie Dahl to painter Bonnie Paruch, photographer Suzanne Rose to sculpture and jewelry maker Angela Lensch.

Organized by The Hardy Gallery with the help of Friends of Gibraltar, the workshops offer students access to the multitude of creative resources and opportunities that flourish in Door County – from painting to glassblowing, songwriting to sculpture.

The Pulse’s own Alissa Ehkme and Sally Slattery led a workshop on photojournalism. Though both majored in English, they passed on knowledge they gained working at the Pulse.

After paging through an issue of the paper, describing how the weekly publication is put together, the students interviewed one another about a favorite vacation or a memory from the first day of high school.

After a short break, the students grabbed their cameras and iPhones, visiting other classrooms to snap photos and interview class participates or leaders.

Some wrote seriously, others humorously on their subjects – showing the multi-faceted art form that is photojournalism. This is what a few of them came up with: 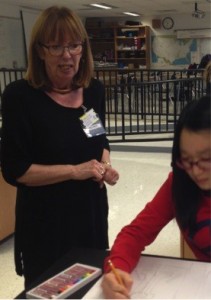 YuJin Kim, a sophomore exchange student from South Korea, works on her design sketch for her Harley Davidson Fashion Workshop. When asked what attracted her to fashion, YuJin replied, “I’ve always liked clothing and I love drawing.”

Sally Nesser is pictured helping student YuJin Kim at the Harley Davidson Fashion Design Workshop at Gibraltar Area Schools. Nesser studied fashion design at college and was in the industry for 10 years. Sally still enjoys fashion today and when asked why she left the trade, she simply said, “I didn’t want to make a career out of it. I liked fashion, but didn’t like the people involved. I just had that a-ha moment when I realized all my stuff would end up in a Goodwill box.”

Photo and caption by Sheridan Ash. 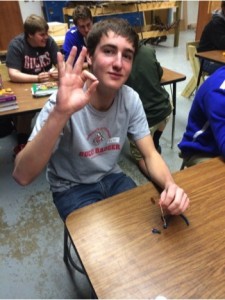 Matt “Van Gogh” Andersen is an upcoming sculptor and at age 16 he has really made a name for himself. In the picture, Matt is working his latest piece, “The Monkey’s Out of the Bottle.”

Andersen doesn’t only focus on his art, however. He also enjoys playing hockey and football as he was also a standout player on Gibraltar’s football team this past year.

Matt is a very gifted student in school as well and has many different philosophies on life. “I am striving to become the best I can be in everything I do, especially in sculpting,” he said. Matt lives life by his motto, “All we are is dust in the wind.” 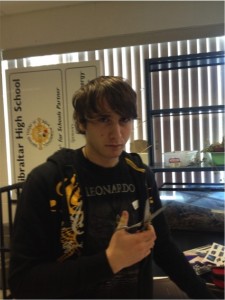 Photo and caption by Erik Bosman.

No Future in Fashion for Floris

First I interviewed Floris Scherb on his thoughts on fashion design. He said, “I had no idea on why I was in the workshop for Fashion Design.” He also said he just wanted to try something new. His favorite brands are Nike and Vans. He has been interested in fashion design for about five minutes. “I have no future in fashion design,” he said.

Photo and caption by Connor Brennan. 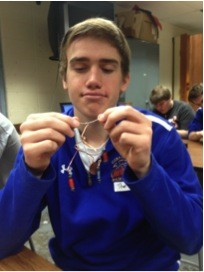 Thor Herman Aymond Johnson was in a sculpting workshop making a mobile on Feb. 20 during the Exposure to Creativity workshops at Gibraltar High School. He made a mobile with wires and beads.

Thor passionately enjoyed this workshop because he likes “building things.” He also enjoyed this class because he was talking to his friend Matt who had also made a beautiful mobile sculpture. Thor was working hard to create a masterpiece that he would keep forever.

Photo and caption by Lauren Kita. 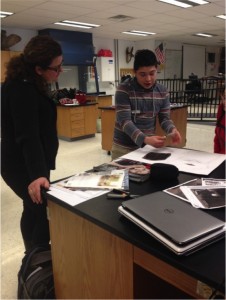 Cheri Radovancevic, international product manager of Harley Davidson, has led her fashion workshop for three years at Gibraltar High School. Radovancevic has always been a “huge fan of Door County.”

To begin the workshop, her husband, Nick, gives a brief history of Harley Davidson apparel and hands the mic to Radovancevic. She explains to students Harley Davidson used to be used solely for their function but now, “It’s about function and fashion.” She is pictured with Bryan Licona, a sophomore at Gibraltar who “likes clothes”, explaining his Harley Davidson fashion design.

Photo and caption by Sadie Nelson. 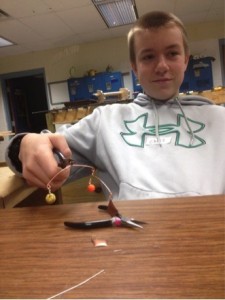 In the Exposure to Creativity workshop, Sculpting, students craft balanced mobiles from wire and other bits and pieces. Amelia Sitte, when asked why she took the class, said, “I made a mobile in Physics and thought it would be cool to make another.”

Some students were not so enthused. Chris Drover (pictured) said, “It was my last option, I had no choice.”

While many students found the workshop fun in the long run, they had to do their fair share of suffering. “My thumbs hurt so much, but it’s decent,” said Derek Haskell (not pictured).

Photo and caption by Olivia Dahl.

For more information about the Exposure to Creativity classes visit thehardy.org.