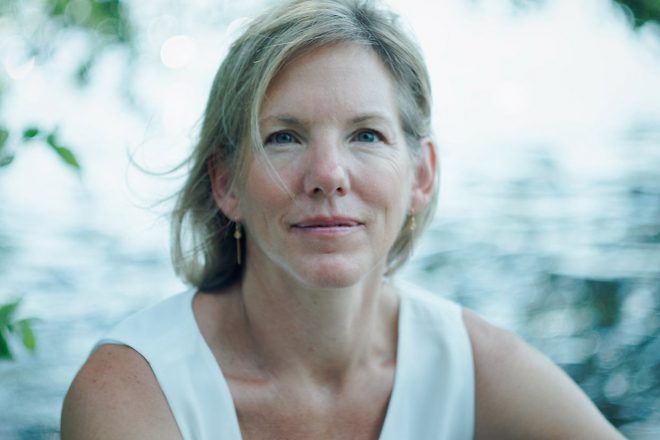 One of the company’s first resorts, the club was a popular vacation spot that had a main lodge, two golf courses, a ski chalet, shops and lots more. The on-site nightclub brought in big acts such as Peggy Lee, Tony Bennett, Liza Minnelli and Sonny and Cher. And notably, the club had the “Bunny Dorm”: on-site housing for the women who donned the iconic, brightly colored bustiers; bunny ears; bowties; and poofy tails.

The club closed in 1981, but you can still get a peek into what life might have been like there in Christina Clancy’s newest novel, Shoulder Season. The story follows 19-year-old Sherri Taylor who, after her parents’ death, leaves East Troy, Wisconsin – the only home she’s ever known – to try her hand at being a Bunny. The story is fictional, but Clancy interviewed former Bunnies about their experiences to add authenticity to the story.

Although the backdrop is the Playboy Club, Shoulder Season is ultimately a coming-of-age story about a young woman who’s trying to find her place in the world and makes a few stumbles along the way. The story is fast-paced, funny, heartwarming and heartbreaking – I recommend giving it a read!

Clancy sent her answers to a few questions to share why she decided to write the book, how she writes about trauma and what she’s working on now.

Grace Johnson (GJ): What made you want to write this story?

Christina Clancy (CC): Oddly, it was not a fascination with Playboy. Instead, I wanted to write about East Troy, a place I find so enchanting. I was interested in how the resort changed the culture in this small town. Most people who grow up in places like that think they need to leave in order to see the world, but for a while, they must have felt like the world came to them.

GJ: I found that the style of the book was very interesting. Instead of each chapter flowing into the next, they stood out independently, almost like vignettes in Sherri’s life that all tied together. What made you decide to go this route, and how does it lend itself to telling Sherri’s story?

CC: My writing partner for my debut novel, The Second Home, used to write for television reality shows. She helped me so much when she’d send back comments saying, “What are you trying to accomplish with this chapter?”

It got me thinking that each chapter should have a goal, or some sort of role in advancing the story. If the chapters feel like they are independent, that might be a reflection of me trying to introduce a character, a place or a stage in development. I haven’t had readers tell me they are bored by my books, so that technique is very helpful.

GJ: There are a lot of tough scenes to read. Although they are sprinkled throughout, Chapter 12 was especially intense. What was the most difficult part for you to get down on paper? Were these experiences pulled from the interviews you did with the real Playboy Bunnies?

CC: The scene you mention in Chapter 12 involves Sherri getting tricked into doing something she didn’t want to do, a scenario that I heard about (and embellished) from one of the Bunnies I interviewed. It’s hard to write those scenes because you want to protect your characters, but Sherri’s flaw is that she’s so naïve.

Both of my books address the power imbalance between men and women, and how this plays out in sometimes hard and emotionally damaging encounters. That said, I try to portray men and women as complicated, and show the bad but also the good. Plus, trouble is a necessary element of any story.

GJ: Have any of the Bunnies you interviewed read your book? What are their thoughts on their story and experience being told?

CC: Pam Ellis, the Bunny I spent the most time interviewing, said she thought it was realistic, and she liked that the surroundings were relatable. When I asked her this question, she said, “Shoulder Season is in the top three books I’ve ever read!”

GJ: How did you land on Shoulder Season as the title? Were there any other contenders?

CC: I wrote a bit of dialogue near the end of the book where someone explains to Sherri what they mean by shoulder season. It’s a resort term for the time between peak and off-peak.

Bells went off in my head: It seemed like a metaphor for that moment in Sherri’s life, and also the appeal of the Bunny costume is in the bare shoulders – a bareness that is also very vulnerable and exposed. It seemed perfect and sounded pretty.

The original title was Crooked Lake because that was the original name of Lake Beulah, where so much happens. My editor didn’t like that one because she thought it sounded like a thriller, and I think she’s right.

CC: I have so many books to read! Here’s what’s in my pile currently: Songs in Ursa Major by Emma Brodie, Godspeed by Nickolas Butler, The Plot by Jean Hanff Korelitz and the memoir Little and Often by Trent Preszler.

I’m working on a new novel set in a lakeside community in 1927. The detail that stood out to me was that the people who stayed there took all their meals together in a clubhouse.

I thought, what if someone was miserable from all the togetherness? That’s something a lot of us can relate to after COVID lockdown. I’m having fun with it, but historical fiction is hard because you have to remember to tell a story, not just share all the interesting information you dig up – and there’s a lot of information to dig up! I have to stop researching and start writing, and allow myself to let go of millions of interesting, but useless facts I’ve learned.

Clancy is one of the featured authors at the 2021 Washington Island Literary Festival, Sept. 16-19, when she, along with five other authors, will lead discussions and workshops. Visit writeondoorcounty.org to find out more.