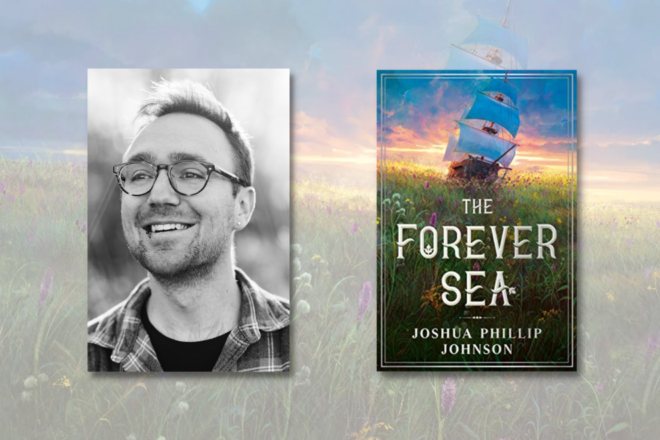 The following is an excerpt from a Door County Pulse podcast that has been condensed and edited for clarity. Listen to the full interview below.

This year, Joshua Phillip Johnson will serve as the fiction judge for the Hal Prize contest. He teaches writing and literature courses at the University of Minnesota-Morris. His debut novel, The Forever Sea, was released in 2021, and the sequel, The Endless Song – the conclusion to the epic tale – is set to be released in January 2023.

I sat down with Johnson recently to discuss his book, writing in the fantasy genre, his journey as a writer and what he’s looking for in Hal Prize contest submissions.

Grace Johnson (GJ): We brought up, briefly, eco-fantasy, so we are going to touch on that a little bit.

Joshua Phillip Johnson (JPJ): So I think fantasy, maybe more than some other speculative genres, is often dismissed as being not especially serious or relevant to important issues going on. I think it is a fair question to say, “Look, if you have something important to say about the environment, why do it with this genre that seems to be pointing away from reality?”

My thought is, fantasy has a couple of things working in its favor, or that are built in, that are really great for thinking about the environment.

One of the things that I think environmentalists often encourage people to think about is this thing called systems thinking – sort of thinking beyond a particular phenomenon or catalyst and asking, “How does this work within a broader system of really interrelated factors?” That’s all worldbuilding is. I think fantasy – just as a genre, that uses this idea of worldbuilding and imaginative play – is really good for thinking about this stuff.

GJ: Tell me about your writing journey. How did you develop as a writer?

JPJ: I started as a reader, and I still think of myself primarily as a reader. If I could do only one of two things, either reading or writing – and I’m not on deadline – I always prefer to read.

I think books really saved me as a kid. I kind of had a hard childhood like a lot of other people, and stories were always a refuge.

As a child, I remember when I was staying at my dad’s house, I would go up in my room and would use candy money that my dad gave me to buy notecards, and I would make little choose-your-own-adventure stories on these notecards.

I would clear all the stuff in my room so I would have a big space on the ground, and I would make a kind of tree out of these notecards. “If you killed the hydra, go to this page,” or whatever. These, I think for me, were my first way of using writing to sort of deal with the world around me.

GJ: Did you have a point where you felt that you could officially declare yourself a writer?

JPJ: I have not hit it yet. I don’t know what it is. I think I have detached myself from the product of writing, even though the book is sitting right there, and I know it’s got my name on it.

GJ: In regard to the Hal Prize, what are you looking for in submissions?

JPJ: What often catches me is a story that knows what it’s trying to do – there is kind of a whiff of intentionality. A writer who knows that voice is their strong suit. I think stories that lean into complexity and find something there. A story that doesn’t need to be tied up neatly with a bow – stories that are OK with ambiguity.

The Hal Prize is open for submissions in fiction, nonfiction, poetry and photography. The contest – open to anyone in the United States – will close Sept. 16. Visit thehalprize.com to find out more.