Casey Rabach may have played 10 years in the National Football League, but he never forgot where his passion for sports came from – the fields and playgrounds of Sturgeon Bay.

He returned to Door County in 2012 after a professional career that took him to the Baltimore Ravens and Washington Redskins. Now he wants to transform the way youth sports are approached in Door County.

“The goal is a culture change in the whole area,” says the 1996 Sturgeon Bay High School graduate. “I know that’s going to take a while, but that’s the goal.” 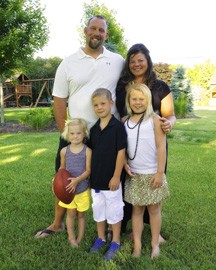 Casey Rabach with his wife Nicole and children Alana, Porter and Siena.

While Rabach formed a professional foundation playing youth sports in Sturgeon Bay, largely under the guidance of his father Gary, his career exposed him to other youth sports organizations that blew him away.

“On the East Coast there were a lot of club sports that operated really well,” he says. “They were well-funded, well-coached. And we fall short here. By raising money, we can better equip and utilize the resources that we have in Door County.”

What exactly does Rabach believe is lacking?

Coaching education, for one. Anyone who has been involved in youth sports on the peninsula, either as a parent or a coach, knows how hard it is to find qualified coaches at all levels. Too often positions are filled by whatever warm body has the spare time.

Unfortunately, that leaves many kids with bad experiences, either not getting the instruction they need or not having the fun that drew them to sports in the first place.

“It’s nothing against Dads out there coaching their kids or their kids’ friends, but we need a more organized approach,” Rabach says.

Josh Kropuenske of Baileys Harbor has been coaching boys and girls youth sports at nearly every level in Northern Door for 13 years, including the last three as the varsity girls basketball coach at Gibraltar High School. The father of two sports-mad middle school boys knows all too well the struggle to find good coaches.

“Part of the struggle has always been that with youth sports you’re talking about volunteer positions,” he says. “For young people with the ability to coach it’s hard to get involved. You take the time away from work, the travel, the practice time, and it becomes a burden financially.” 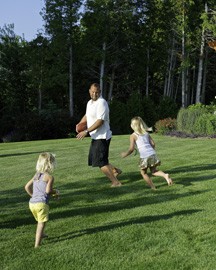 Moms and dads often fill the positions. Some are great, with excellent knowledge and skills, but many simply re-hash whatever was taught to them 20, 30 or 40 years ago.

Casey’s father Gary Rabach was an assistant and head football coach at Sturgeon Bay High School for many years. He was the school’s athletic director from 2006 – 2012, where he dealt with the struggle to find coaches from the administrator’s chair.

“We’re not doing anything to educate our coaches at the youth level,” he said from his home in Phoenix, Ariz., where he retired last year. “We’re just looking for bodies to fill positions and hoping they don’t have four drunk driving convictions. I’m not blaming anyone about it, we just haven’t been doing enough about it.”

In the worst situations, you get parents whose top priority isn’t the team, but their own kid or agenda, and an emphasis on wins and losses at even the earliest levels of play.

“We have overzealous coaches who want to win at all costs,” Gary says. “When I was coaching, I didn’t really care if my freshman team won every game or lost every game. What we need to instill is the idea that as a coach, you’ll be measured by the product you give the coach at the next level, not by wins and losses. We’re hurting athletics in Door County because we’re not teaching that lesson.”

Kropuenske agrees but says he’s taken a lot of flak in his coaching career for de-emphasizing winning even in pre-middle school years.

“People will argue with me that if you don’t start winning at a young age, they’ll never learn how to win,” he says. “And I can even see that to some extent. But it’s more important to keep these kids interested, and they’re not going to if it’s not fun.”

With enrollment numbers dwindling throughout the county and more sports, extracurricular activities and technology battling for the attention of students, Rabach says coaches can’t afford to write off anyone.

“We have to keep them interested in sports,” he says. “When we emphasize winning above skill development and enjoyment, players lose interest and numbers dwindle.”

“The ones that really suffer from this are the kids,” Casey says.

The couple was involved in many charities on the East Coast during Casey’s playing days, but they hesitated to launch their own foundation for a simple reason.

“It just wasn’t going to feel right not doing it in Door County,” he said.

Casey isn’t sure where exactly his foundation will focus its efforts. It will fund scholarships for Door County students, but he says his goal of improving youth sports could take many forms.

That could be funding for facilities and equipment, and it will almost surely include coaching education and training, which Kropuenske welcomes with open arms.

“Without parents volunteering to coach, we wouldn’t have most of these programs,” he says. “The good thing is I’ve never met one who wants to do it wrong. They want to do it right, so if you provided the training they’d be more than willing to do it.”

The tournament will be held July 19, 8 am – 12 pm. Each boat will host six participants, two former NFL players and four fishermen. NFL alumni include Casey Rabach, Lynn Dickey, Paul Coffman and David Whitehurst. The fee is $2,000 per boat.

A pre-tournament dinner, open to the community, will be held on July 18 at The Lodge at Leathem Smith. The cost is $75 to attend.