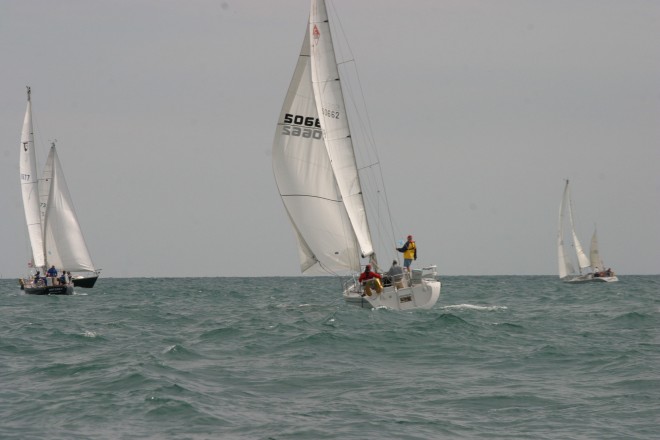 Sailboat racing has brought friends and families together off the shores of the Door Peninsula for nearly a century. And as intriguing and adventuresome as these races are, none can compare to the granddaddy of them all – the Hook Race Death’s Door Challenge. Spanning 197.4 nautical miles, this course pits experienced crews against each other and the ever-changing face of Lake Michigan. The Hook Race begins off the shores of Racine, Wisconsin and continues through Death’s Door (the historically treacherous passage between the peninsula’s tip and Washington Island where numerous schooners and ships have sunk). Racers then sail around Chambers Island’s western shore and finish off at Sturgeon Bay’s old stone quarry.

As a crewmember for other captains on several Chicago to Mackinac Races – the most famous of the area’s regattas – I knew it was time for my shipmates and me to complete a distance race on our own boat, relying solely on each other and a vessel both sound and fast. So, in 1998 we put together an experienced team of sailors who could endure days of windless heat as well as a fast moving squall. Since that first race in ‘98 the Hook Race has given us all of that and more. In lieu of racing the Chicago to Mackinac Race, many sailors prefer the Hook Race that affords easier logistics and expenses for crews and captains. Although the Hook Race is some 100 miles shorter, it is just as challenging every step of the way.

Not alone in my desire to finish a long Lake Michigan race in Door County, the Hook Race is drawing more and more sailors whose post-race agendas include cruising to our islands, bays and villages. Starting on a Saturday in late July, most sailors are clicking rum glasses together at the Sturgeon Bay Yacht Club by Monday afternoon. They are celebrating a finish regardless of their rankings. Started in 1984 with just 12 boats racing from Racine, Wisconsin to Menominee, Michigan, participation topped to 75 boats in 2000 with an average fleet of 60-some experienced crews. Hook Race coordinator Steve Paulson of the Racine Yacht Club attributes the success of the race to Door County’s beautiful cruising grounds. “It’s a good place to finish and have a great cruising vacation with the family.”

The event, sponsored and run by the Racine Yacht Club, celebrated its  20th anniversary in 2004. When asked if any boats have ever been lost, Paulson said, “We have lost a few boats through the years but we’ve found them.” Fortunately, they were not found by the Coast Guard; they simply went to the wrong harbor. With the introduction of Global Positioning Systems to nearly all boats, the harbor error is no longer an issue.

Weather, on the other hand, can still throw sailors for a loop. Last year, a high-pressure system brought light wind to the area and 20 boats out of 61 dropped out of the excruciatingly hot, windless conditions. The record of 24 hours to complete the race was set in a southerly blow in 1987 by Foxfire, a 54-foot sloop. Last year’s winner was Syrena, a 32-foot boat owned by Nicholas and Angela Hayes of the Milwaukee Yacht Club who found the new wind and completed the course in 42 hours and 29 minutes.

James “Jimmer” Kullerstrand, a Hook veteran sizes the up. “It’s really three races. It’s the race up the lake, the race through the Door, and a race to the quarry.” Andy Hallett, another captain, successfully navigated a 34-foot sloop in 2003 for a first place finish in its class of 12, placing fourth overall in a 60-boat fleet. When I asked Andy what his most memorable time was on a Hook Race, he didn’t discuss the success as much as the treachery. “I recall vividly going through Death’s Door Passage with a spinnaker up [a spinnaker is a large and sometimes unwieldly downwind sail]. The wind was blowing hard; it was rough. We had a very intense time jibing the spinnaker to get on our new course and keeping everyone onboard.”

And of course navigators aren’t the only ones concerned about running aground on the shoals of the Door. As a captain and boat owner, I’ve had to listen countless times to the sound advice of the navigator. When the navigator tells us to change course, it can mean a change to a smaller sail and watching the numbers on our speed instrument fall in the name of safety. Hallett also recalls “sitting off Chamber’s Island in the windless moonlight with the water like a mirror, staring at the lights of the boats reflecting in the water. It was beautiful.” But the biggest draw for Captain Hallett is finishing in home waters and knowing the area well. He feels this can give him a leg up on his competition.

Yet the disparity of the wind and its direction as boats enter the Door can also turn many leaders into losers as the breeze dies and the fleet rides a prevailing wind into Door County waters. Distance racing is part strategy, part preparation and part experience. But it’s also part luck. Lake Michigan’s weather is nearly patternless and at times it may seem that a particular boat is playing the course like a fiddle, only to be passed in the end. The volatile fronts that cook up over the prairies have sent everything from hail to twisters in the path of Lake Michigan sailors.

I recall my own boat being “knocked down” early in the start of a Hook Race four years ago. The wind and waves built as the spinnaker oscillated the boat’s mast back and forth like a toy. In a moment, the boat rounded up into the wind with a rush, putting her hull over hard. Helpless on her side the sails filled with water. The feeling of standing in a cockpit of cold lake water in a vessel I had come to call home will not soon be forgotten. This could only be matched over 100 miles later by a forty-knot squall line that hit us off of Chambers Island – this time with properly reefed sails. The extremes are the challenge. Windless days, white decks turned black with biting flies, melting ice and a dwindling food supply can be as miserable as piles of water busting over the bow on a four a.m. dogwatch.

In between the lulls and the squalls there are also, quite often, blissful hours of sunshine and consistent wind. Memories abound of warm southerlies billowing our sails as we soared northward. Often we calmly toasted to the twilight or welcomed a new sunrise on a serene sea. For most, distance racing quenches the competitive fervor that builds up in the off-season. For me, however, there is nothing on this course that compares to the first sighting of the peninsula’s shores. Whether heeding the glow of Cana Island’s light or storming past Pilot Island’s rocks in a northerly, no Lake Michigan destination can match the splendor of finishing a race among the bay’s bluffs, islands and rocky shorelines.