It seems a shame to start a story about a competition of strength and endurance with its saddest element, but the figures are fact:  Of the 45 triathlon deaths between 2003 and 2011, 31 occurred from cardiac failure during the swimming segment of the competition (you can see the full USA Triathlon Fatality Incidents Study at usatriathalon.org). 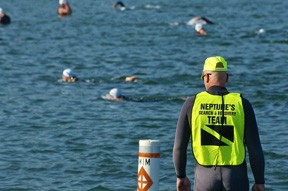 No one is certain why the swimming segment takes such a toll, but it’s caused triathlon organizers to examine their own safety procedures.

“We put a lot of thought about what would happen if we had an unconscious swimmer in the water. How do we get them out of the water and to treatment as fast as possible?” said Sean Ryan, director of the Door County Triathlon, which takes place this weekend.

“When I attended a national triathlon conference in January, they said most of the deaths are caused during the swim, and most are caused by heart attack,” Ryan said. “In other words, it wasn’t someone getting kicked in the head or someone going out there naively when they can’t swim. The key to the situation is how fast they were able to get them out of the water.”

Ryan and his staff already had extensive personnel and safety measures in place, but they decided to kick it up a notch by donating two evacuation sleds to area first responders – one went to the Sturgeon Bay Police Dept. and the other to the Brussels-Union-Gardner Fire Dept.

“The evac sleds look like giant kneeboards like you would tow behind a boat, but these are three or four times the size. They have toggle handles around the perimeter,” Ryan said. “They’re used by military units like Navy Seals, and adventure surfers. They have a fixed connection to a jet ski. They come in handy for our event. Those departments can use those outside of triathlon time. They can use them for ice rescues during the winter time. It was a smart investment for everybody.”

“The event bought them at our request,” said Sturgeon Bay Police Chief Arleigh Porter. “My background, I’ve always been around water, been involved in marine patrol. Had my own boats my entire life, but I’ve also recovered numerous drowning victims from the Bay of Green Bay over the years. I just know from my experience that it’s very difficult challenge to get a pulseless, non-breather into a pontoon boat. So I did a bit of research and I discovered this device. The sled rides almost flat on the water so it’s not as hard to slide that person onto a flat surface. This is what I’ve been wanting for this event.”

Mary Heimann, director of the lifeguard crew, said the evacuation sleds could make all the difference in saving a life.

“If we do have someone who is unconscious in the water, we can get them back to the shore much faster than in the past,” she said.

“We can get a person on the sled and back to shore in about a minute and 15 seconds.”

From there a shore team takes over to get the injured person to the waiting ambulance.

“We figure all that can happen in less than four minutes,” Heimann said.