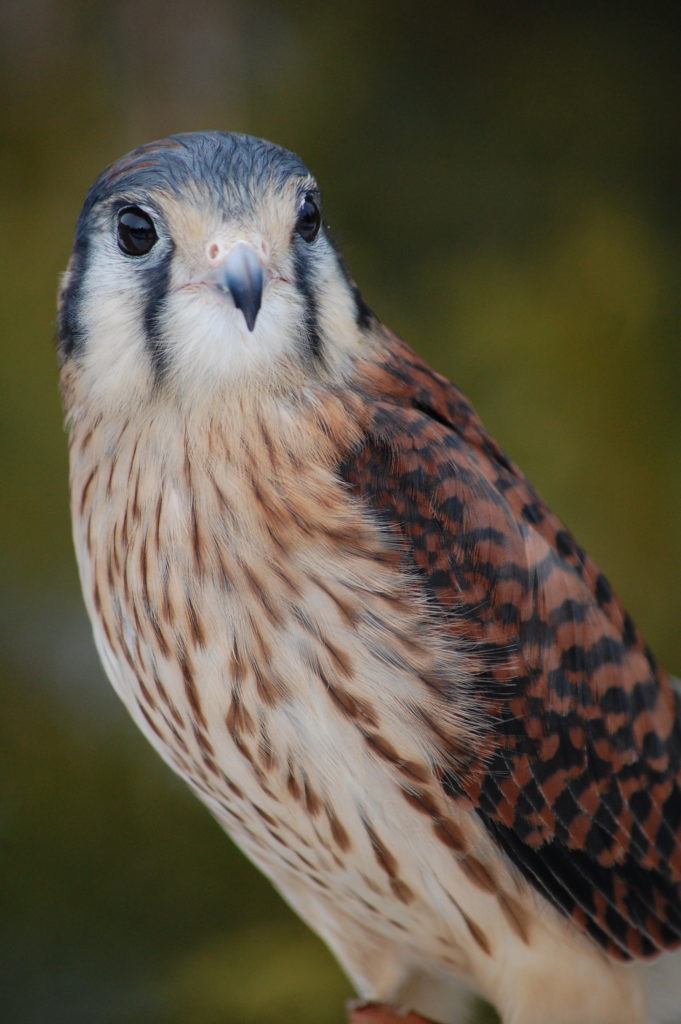 When you’re driving the rural roadways of Door County, you’ll spot lots of birds perched on the power lines along the road. Among the robins, blackbirds, mourning doves and the like, there is a good chance a falcon is perched there, too.

The American kestrel (falco sparverius) has adapted well to the agricultural landscape of Door County. The high vantage point offered by perching on power lines gives them a great view as they watch for the movement of prey in the fields below.

Kestrels are the smallest and most common of the falcon species that can be seen in this area. They have all the attributes found in the family of falcons, but some very unique differences as well. Identifying characteristics common to all falcons are a compact streamlined body, large eyes, long pointed wings, dark colored eye stripes, a long tail that is fan shaped when open, and long slender toes.

One physical feature that separates the American kestrel from other falcons, and almost all other raptors, is their coloration. Termed “sexually dimorphic,” the male and female have uniquely colored and patterned plumage for their gender. Similar to songbirds, the female is more drab in coloration. She has a brown and cream-streaked breast and a rusty-colored back with dark broken barred markings.

The male is the more colorful of the two. Their white to rust-colored breast and bright rust-colored back are both accented with black spots and bars. His steel gray wings and cap contrast strongly with the rusty colors. Add in black and white banding on the tail and underside of the wings, and the result is one of the most colorful of all north American raptors.

Most species of falcons are hunters of other birds and are built for speed and long aerial pursuit. The kestrel targets a different animal for its main food source. That is where more of the differences between kestrels and the other falcons show up.

Being a small falcon (3-6 ounces, 9-12” including tail), the kestrel pursues small prey. A buffet set for a kestrel would include large insects, perhaps a small snake, a small bird or two, and a large platter of mice and voles. Kestrels are mousers. While most falcons use their unusually long toes like nets to catch other birds, kestrels’ feet and toes are much more stout and strong to subdue their small mammal prey.

Many birds have a limited ability to hover for brief periods of time. Falcons, being highly skilled flyers, are quite good at it. But the kestrel has taken hovering to new heights. They are experts at it. Kestrels will fly from their perch to a spot above a grassy field. Then, like a drone, will hover in a fixed location just before diving down on their prey.

As researchers worked to learn more about kestrels, one primary focus was on their hovering behavior and how it contributed so strongly to their hunting success. They were amazed at what their studies found. Part of the research was on kestrel eyesight and their focal ability while hovering and diving. While looking through the eyes of a kestrel it was learned that kestrels could see in the ultraviolet light spectrum. (Bees and some other insects have this ability too.)

It was a surprise to the scientists, and now they needed to incorporate this unique ability into the kestrel hunting technique. One piece of this mystery puzzle was still missing. That missing piece turned out to be mouse urine. The urine of mice and voles reflects ultraviolet light.

So when they put all the puzzle pieces of the kestrel’s hunting abilities together, this is how it played out. The kestrel perches above an area likely to have mouse activity. When they spot movement and the direction it’s going, they spring into action. Flying above the field, they look down. Using their UV light vision, below them they see an illuminated road map. It is the trail system of the mice marked with urine scent trails. The kestrel will hover above a main intersection of trails, ahead of his prey. When the mouse arrives, the kestrel dives down to pounce on the unsuspecting rodent.

As agricultural use of pesticides has decreased, the population of kestrels has improved dramatically. Once a rare sighting, kestrels can now be seen commonly throughout Door County. Aside from farm country, much of the preserved grassland has given the kestrel additional hunting territory. Being cavity nesters, kestrels also benefit from protected stands of mature timber. An old nest cavity from a pileated woodpecker makes an ideal home for a kestrel pair to raise a family. Man-made nest boxes are readily used by kestrels as well.

Although their numbers decline in winter due to migration, some kestrels will remain in Door County all year. Late summer and early fall are the best times for kestrel sighting. The young of the year and the mature adults are all out together, in search of their next meal.

To help identify them from other power line birds, here’s a couple tips:  kestrels will usually be alone on the wire, not perching in groups. Look for the distinct tail bobbing motion. Kestrel tails are rarely stationary, methodically bobbing up and down. If you see what you suspect is a kestrel, resist the urge to pull your car off the road close to them. They are very wary and will quickly fly away. Use your camera zoom or binoculars to get the best view. Be observant, and the next power line percher you see might be one of Door County’s fantastic falcons.

Rob Hults is a naturalist and conservationist here in Door County. He is a founder, and the executive director of Open Door Bird Sanctuary, located in Jacksonport. For more information visit opendoorbirdsanctuary.org.