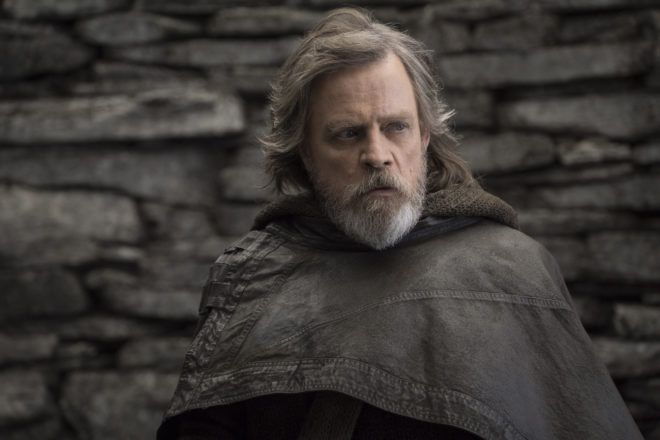 ​Mark Hamill returns as Luke Skywalker in the latest installment of the Star Wars series. Photo courtesy of LucasFilms.

My friend Paul Wanish of Ephraim soup infamy said this to me as we leaned on the bar at Trixie’s the other night. His thought about The Last Jedi is one I have heard corroborated from other Star Wars enthusiasts. An embarrassingly high number of my conversations over the last week have led with a query about this film, and a good half-dozen people have said that exact sentence:  “I think I need to see it again.”

This sentence has not been spoken with fervor and smiles. The tone bespeaks uncertainty, a need to sort out the details, and to breathe a little before forming an opinion. I get it.

As Luke Skywalker’s X-Wing ascends from Dagobah in The Empire Strikes Back, leaving Yoda and Obi-Wan’s ghost in the proverbial darkness, Yoda utters the now infamous line:  “No. There is another.” To fans in 1980 and beyond, who Yoda is referring to was left up to some interpretation. Was he alluding to Luke’s twin sister Leia? Or to Vader, who ends up destroying the Emperor? The Last Jedi points to a new answer.

Leading up to seeing The Last Jedi, I did what most devoted fans do:  I re-watched the films in the sequence I find most powerful and informative. I ended with The Force Awakens. In it, Rey, a Jakku scavenger, has a flashback scene that begins and ends when she touches Anakin Skywalker’s lightsaber. This flashback links all the films together, giving us major information about The Last Jedi and Rey’s future, but more importantly, her origin. The dialogue in the background includes Alec Guinness (original Obi-Wan) saying “Rey” in audio cut from the original series, and Ewan McGregor (newer Obi-Wan) saying, “These are your first steps.”

The hovering question of “who” lingers. The title of The Last Jedi has duality, like so many aspects of the saga. The last Jedi is implied to be Luke, since Episode VII was devoted to locating Luke. Yet, the symbolic lightsaber has been hanging between Luke and Rey since December 2015.

At times, the break-neck pace of the two-and-a-half hour film gets exhausting. In true Star Wars fashion, there are three simultaneous plots, and each story and its characters can feel overwhelming. Just when it appears that all action is approaching an end, another battle happens, playing out the final moments on a visually stunning salt planet Crait, which bears an eerie and somewhat holy resemblance to the ice planet Hoth from Episode V.

Director Rian Johnson still manages to accomplish a few impressive feats in his directorial debut with the saga. First, he manages to maintain a sense of mythological import that resonates with the original trilogy. Critics who were disappointed in The Force Awakens pointed out that it relied too heavily on the formula of A New Hope, as Rey’s story played out far too much like Luke’s original call to join the Rebellion. Some predicted that the newest episode would be far too much like Empire Strikes Back, a notion that Johnson, et al. seemed to have in mind when Kylo Ren tells Rey that her parents were nobody of any significance to the saga. I remain unconvinced of this (there are too many signs!), and believe it’s simply a trope for Kylo to throw Rey off her game, but the filmmakers seem to have been aware of the need to break new ground. Indeed this was accomplished.

Loved characters got well-deserved screen time, and Mark Hamill’s Luke is truly impressive in what feels like a character coming full-circle. And of course, Leia’s arc throughout the film is especially poignant given Carrie Fisher’s death a year ago. The revival of Chewbacca, R2-D2, and even BB-8, create a sense of familiarity as they forge new narrative ground that is gleefully unexpected for seasoned viewers.

The film is not perfect. One scene in a casino feels forced and unnecessary. Favorite new characters don’t get enough screen time together. The dialogue gets too hokey at times, even for Star Wars. At the center, though, is the emerging story of two characters caught by their traumatic pasts with the Force. The evolutions of Kylo and Rey feel exquisitely timeless and organic. Their simultaneous unfolding as two people grappling with the pull of the Dark Side is the real triumph of the film. Their rise as characters embedded in a 40-year-old story doesn’t feel contrived in the least. It sort of feels like this iteration of the story has been there all along. Which is exactly how we like it.

Lauren Bremer is a life-long lover of the Star Wars saga. She teaches high school English at Gibraltar High School and lives in Baileys Harbor with her own heroes, Finn and Maggie.