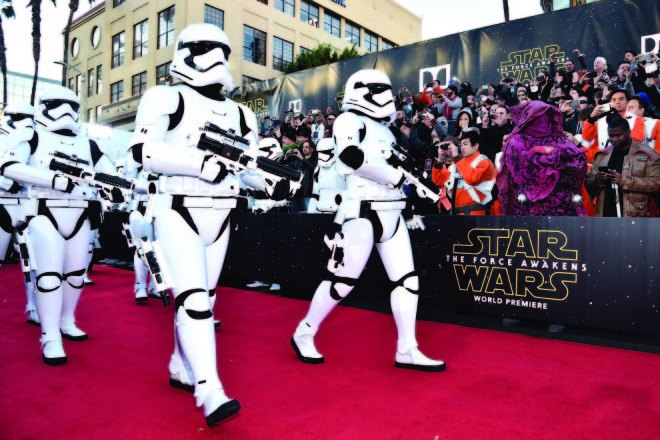 Stormtroopers attend the world premiere of Star Wars: The Force Awakens at the Dolby, El Capitan, and TCL Theatres on Dec. 14 in Hollywood, California. Photo by Alberto E. Rodriguez/Getty Images for Disney.

In 1997, I experienced movie magic. I got to sit in a theater and watch Return of the Jedi on the big screen for the first time. It is with a recently renewed sense of optimism that on Dec. 18, I earnestly hope to experience seeing the new Star Wars movie on the big screen.

It was something that as a child of the 1980s I knew with relatively sturdy certainty I would never get to experience. The Star Wars saga of my youth was relegated to just that: my youth. Although I wasn’t born in 1977 when Episode IV: A New Hope, the first installment of George Lucas’ vision, hit theaters, and later, at the tender age of two, I didn’t get to see 1983’s Episode VI: Return of the Jedi from the plush rows of cinematic seats in suburban Chicago, it somehow never stopped me as a child from getting lost in the Star Wars galaxy. I knew every line to the original trilogy by the time I could sink a three-pointer in my middle school gym; I could explain with annoying detail the difference between a TIE Fighter and an X-Wing to my uninterested friends; and I was pretty sure that Cindel from the Ewok Adventure spinoffs was my long-lost little sister. In short, I was hooked.

So when I discovered that George Lucas intended to brush off the proverbial dust from the trilogy to celebrate the 20th anniversary of the original release, to say I was joyful is an understatement. I wasn’t completely enchanted by the 1990s “updates” to the originals, but I still found myself nostalgically reunited with, what I consider, the greatest cinematic endeavors of our time. While Luke and Vader dueled aboard the second Death Star in the final moments of the film, I felt chills crawling my spine and tears that I subtly tried to hide from my friends slipping down my cheeks. And I felt a small door to my childhood closing quietly with a click. 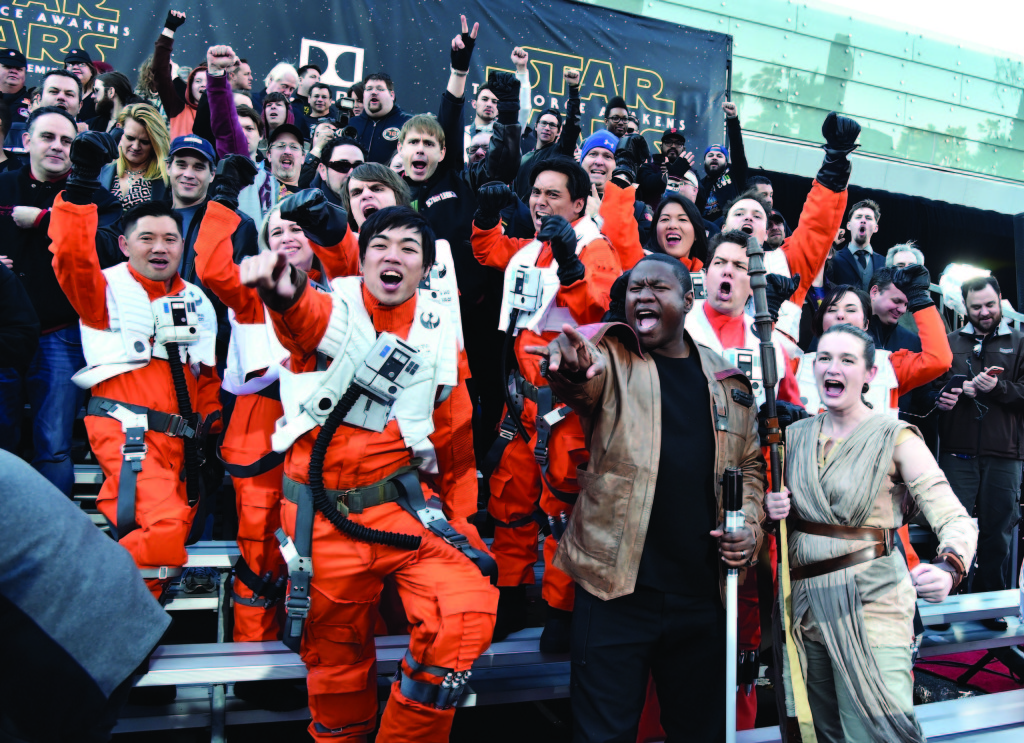 Fans attend the world premiere of Star Wars: The Force Awakens at the Dolby, El Capitan, and TCL Theatres on Dec. 14 in Hollywood, California. Photo by Alberto E. Rodriguez/Getty Images for Disney.

People often ask me, “What’s the big deal?” Why is Star Wars anything other than an overtly pumped-up and lame-o sci-fi rendition of a galaxy that’s not even real? The answer to that question for me, and for many fans, is tied up in our guts, our hearts and our minds. It gets me in a place that I think the best art should: everywhere. It’s the feeling I got as a 10-year-old when the opening credits would roll and, now, as a grown woman, the anticipation for Episode VII has awakened it and sustains it.

Here are a few of the reasons Star Wars and the release of the saga’s newest incarnation is a big deal. First, Star Wars is timeless. Not only in the sense that the storyline doesn’t exist in real time (it’s in a galaxy far, far away), but in the actual story itself. Mythologist Joseph Campbell famously wrote The Hero with a Thousand Faces, which suggests that a hero’s journey and their story is one with which we are all familiar because they share a common pattern. My sophomore year of college, I bored listeners in a public speaking class with a discussion about how the trilogy follows Campbell’s pattern and that George Lucas would later claim this as his inspiration: an ordinary person suddenly rises from their general monotony and is called to adventure (think Bilbo Baggins or Dorothy Gale, or more recently Katniss Everdeen). A mentor appears and is lost (here, Obi-Wan). There is a refusal or denial of the calling. A talisman is passed to the hero (Luke receives his father’s lightsaber). The hero is taught and tested in trial (Yoda on the planet Dagobah). The hero must enter a metaphorical cave and be challenged by their darkest fears. For Luke, it was an actual cave where he envisioned challenging Vader and saw his own face under the helmet (a hint at our newest episode?). There is an ultimate test (the destruction of the first Death Star) and an eventual return to peaceful life. While this is a clunky and speedy portrayal of an otherwise enduring model of storytelling, it is, at its core, truth. The story of Star Wars is as timeless as the telling of stories.

Secondly, Star Wars crosses barriers that would otherwise divide people. While it may sound like I’m beginning to wax too poetic here, I am reminded that amongst my family and friends, I know a 6-year-old and a 65-five-year-old who are equally pumped about The Force Awakens. And while no one could necessarily praise the original trilogy for being color and gender blind, the newest chapter of the saga looks as though it will crash stereotypes as well. John Boyega, the actor playing Finn, the stormtrooper-gone-AWOL in The Force Awakens, pointed out that young Star Wars fans see heroes, not color. Especially in a galaxy in which one is as likely to have a Wookie as a first mate or a droid named BB-8 as a faithful friend, wasting time examining what divides us seems like an exercise in futility, and perhaps a worthy lesson. 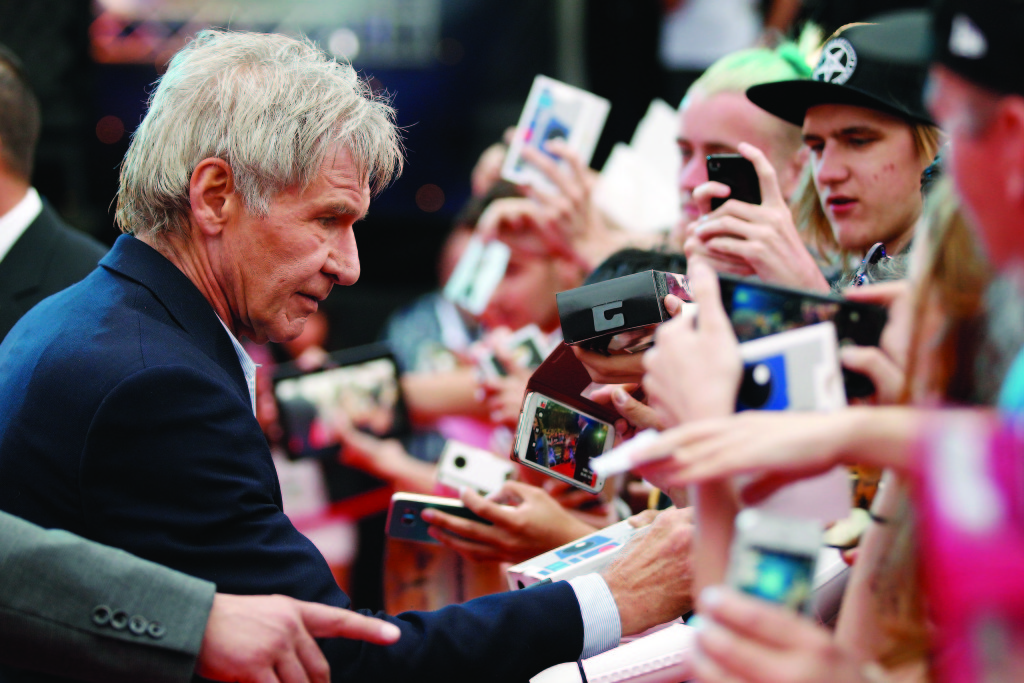 All of this adoration doesn’t mean I was excited when I learned that Episodes VII-IX were in the works. Truthfully, I was downright skeptical and acerbic. The rosy, sanguine glow of my 16-year-old self died a slow six-year death as George Lucas introduced Episodes I-III. Like many Star Wars fans of my generation, I was left stunned, kind of bummed, and then finally apathetic about the turn the saga had taken in these Episodes.

Then I discovered J.J. Abrams of Lost fame would be at the helm of the first installment, and my interest was piqued. He’s a big-name director with a powerhouse of enormous budget action films to his credit. Most recently, he’s rebooted Star Trek twice. It felt a little blasphemous, however, to have him at the helm of the other side of the classic cinematic sci-fi debate. That is until one October day when I had brought the Gibraltar volleyball program to Madison. I was burning time in a Barnes & Noble while my athletes scavenged for Halloween ideas and homecoming dresses. I sat down with a copy of Vanity Fair that had the new cast gracing the cover. I had heard that stars like Harrison Ford, Carrie Fisher, and Mark Hamill had all agreed to sign on for Episode VII, and seeing the familiar face of Han Solo in his classic apparel lounging aboard the Millennium Falcon through Annie Leibovitz’s brilliant lens-eye made me pick up the magazine.

I quickly learned that J.J. Abrams was a lifelong Star Wars and George Lucas fan. I learned that Lawrence Kasdan, the screenwriter of The Empire Strikes Back and Return of the Jedi, wrote the screenplay with Abrams over marathon sessions walking the streets of London and Paris and sitting in Les Deux Magots, the cafe frequented by writers like Hemingway and others of the Lost Generation. I discovered that at the age of 83, John Williams had returned to compose the score. But what sealed the deal for me, and apparently for Abrams when he was convinced to pick up the project, was one single question that producer Kathleen Kennedy posed to him: “Who is Luke Skywalker?” In other words, what if there’s more to know about this character we thought we saw come full circle? Thirty years after Return of the Jedi concluded, where is Luke?

I felt that old nostalgia return. The released trailers fueled that curiosity. It seemed that the tale beloved by so many was in the appropriate hands after all. Kennedy described how she and Abrams felt and knew what the audience wanted because they are the audience: “It’s sort of like going to a concert where you want to hear the new stuff that they’ve written, but really you want to hear some of the old songs. And we’re in a similar kind of thing: we’re getting the band back together, and we know that people are going to want to be reminded of the things they love, but they’re going to expect to have a new experience.”

That was it exactly. They got it. And as I prepare for the release, that old hope is awake. And eager.

By the time you read this, the film will be in theaters, critics will be sounding off, blogs will be buzzing…and does it all matter? Maybe not to everyone. There’s no denying that it’s become a cultural phenomenon, however, and I will be front and center. Waiting for that movie magic. Hoping to come full circle.

Lauren Bremer is in her tenth year as an English teacher and volleyball coach at Gibraltar High School. As a lifelong fan of the Star Wars saga, she hopes to pass along her love of the films some day to her daughter Maggie and her son Finn (whose name she secretly believes she intuited through the Force). Lauren feels incredibly lucky to teach and coach the kindest, funniest, most creative students in the galaxy.