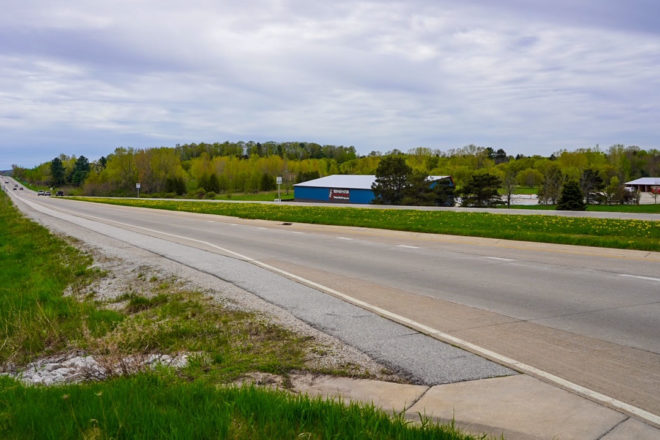 This storage facility was recently constructed, but land across the street was not granted a rezoning for the construction of storage units. The rezoning was granted on the above facility from General Agriculture to Commercial Center after the City of Sturgeon Bay signed an agreement to annex the land, and supply it with public utilities. In return, the property owner will build retail or office space on the 18th Street side. Photo by Rachel Lukas.

Even if storage units seem to crop up everywhere across the peninsula, don’t look for one on Highway 42/57 adjacent to the Egg Harbor Road rotary.

The Door County Resource Planning Committee (RPC) denied a rezoning request earlier this month and in doing so, denied the two heated storage units – one 50 x 150 feet, the other 60 x 100 feet – the owner intended to build.

Kevin Diemert of Vine Street Rentals had requested the rezoning of the western 15.27 acres of his 28.37-acre parcel from Countryside to Commercial Center to establish the commercial storage facilities. The commercial zoning allows smaller, more densely developed lots.

“We see a lot of storage going up in the area, but not hardly any heated storage,” Diemert said. “It would be tucked behind the vet clinic and there’s also a fairly decent line of brush behind there.”

The land is directly east of the Peninsula Veterinary Hospital, which is zoned Countryside and is owned by Rep. Joel Kitchens and his wife, Dr. Sherry Billett. Kitchens submitted a letter for the RPC’s May 5 public hearing opposing the rezoning.

More letters of support than opposition were submitted, but the Town of Sevastopol ultimately sank the request. In April, the Sevastopol Town Board unanimously denied the rezoning, saying it didn’t conform with the town’s comprehensive plan or the rural character of the neighborhood.

“It’s at the very entrance to the Town of Sevastopol and we want a nice attractive welcome mat and don’t think commercial storage fits that profile,” said Linda Wait, chair of Sevastopol’s Plan Commission and a Town Board member during the May 5 RPC public hearing on the request.

Because the town has county zoning, the RPC could have recommended overturning the denial and the County Board could sanction that recommendation. Sevastopol headed that off by filing a certified copy of a petition disapproving the rezoning. That move, done in accordance with state statutes, prevented the RPC from overriding the town’s denial and changing the map against the town’s will.

That left the RPC with only two choices on May 5.

“You can recommend to modify or recommend to deny,” said Mariah Goode, director for the county’s land use services department.

The RPC voted unanimously to deny the rezoning request, a recommendation that will now go to the full Door County Board of Supervisors, May 24.

Diemert said he had another thought for his property given that his rezoning request wasn’t going through.

“I can build the biggest [agricultural] building I want to for my storage and equipment directly behind there without any rezoning change,” he said.

What’s Up with the Other Storage Unit Across the Highway?

The City of Sturgeon Bay had also submitted a letter to the RPC opposing Diemert’s rezoning request. The city has no official stake in the rezoning, except it does have extra-territorial maps in case annexation ever comes into play, and that area is included. Like the county and town maps, the city’s map identified the future land usage as rural in nature.

That stance begged questions about the other large storage unit recently constructed almost across the street from the Diemert land.

Though clearly visible from the highway, that land is accessed from 18th Avenue and officially located within the Town of Sturgeon Bay. Goode said the county denied that official rezoning request because the city was opposed to having a storage facility there. But then the city signed an annexation agreement, exchanging public utilities for an office or retail use on the property fronting 18th Avenue.

“Once they worked out an annexation agreement, the city dropped their opposition to the rezoning, so the RPC felt comfortable granting it,” Goode said.

Marty Olejniczak, city community development director, said the city didn’t want the storage facility but didn’t think they could fight it permanently. Instead, they negotiated the annexation deal.

“It’s contingent on them getting sewer and water,” he said. “We’d have to have it run up 18th and get it looped.”

That’s not happening yet. What could trigger the expense of the public utilities would be a larger land use, such as an apartment complex or subdivision off 18th, Olejniczak said.

“It’s a good idea to run it on 18th, and we talked about using ARPA (American Rescue Act Plan) funds, but at this point there is nothing in the works,” he said.

The city has buffering requirements for developments on city land along Hwy. 42-57 north of the Bayview Bridge.

“It’s a 200-foot setback [from the road], or 100 feet with screening,” Olejniczak said. “Part of the problem with the buffering is the land undulations [along that stretch of highway] are so great you’re either way above or way below the development sites.”

But the new storage facility is still on Town of Sturgeon Bay land and ruled by county zoning. County buffering requirements are different for different land uses. For this one, the property owner is required to plant evergreen trees every 10 feet around the entire building.

“I’ve been watching as I drive to work every day to see when they do that,” Goode said.