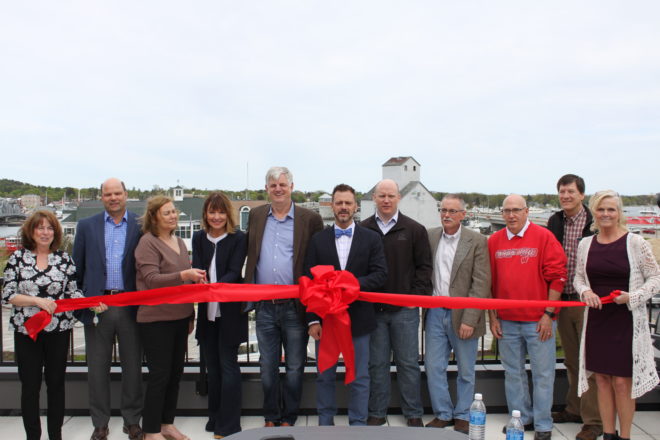 Jason Estes, owner of Sonny’s Pizza, cuts the ribbon on the waterfront patio in Sturgeon Bay on May 19. Photo by Jackson Parr.

Jason Estes, owner of Sonny’s Pizzeria in Sturgeon Bay, cut the ribbon on his restaurant’s new patio May 19. The Piazza at Sonny’s pizzeria will be open seven days a week specializing in frozen blended beverages and craft beers. “They did not have a concrete truck to get down here so one wheelbarrow at a time they came and poured this concrete,” said Nick Freimuth, serving as emcee for the ribbon-cutting ceremony. “Cheers to many, many years at the Piazza at Sonny’s Kitchen.”

One hour after the ribbon was cut at Sonny’s, the new Bay Lofts apartment complex had its own grand opening.

The ribbon-cutting ceremony for the Bay Lofts apartment complex in Sturgeon Bay had all the fixings of a party: live music, food, local beer and a crowd. Packed into a fourth floor apartment, representatives from the City of Sturgeon Bay, Door County Economic Development Corporation (DCEDC), and local residents welcomed the addition to Sturgeon Bay’s west side redevelopment.

“This has been one of the most wonderful experiences I have worked with,” said Chris Laurent, one of the developers for the project. “In development, you listen to the community and you provide what they are asking for.”

“They made a $7 million investment in our community and we appreciate it,” said Sturgeon Bay Mayor Thad Birmingham. “Sturgeon Bay was a place to pass through and it’s not anymore. I think we’re going to continue to grow.”

“We hear about this housing shortage here in Door County and this really puts a dent in that,” said Frostman.