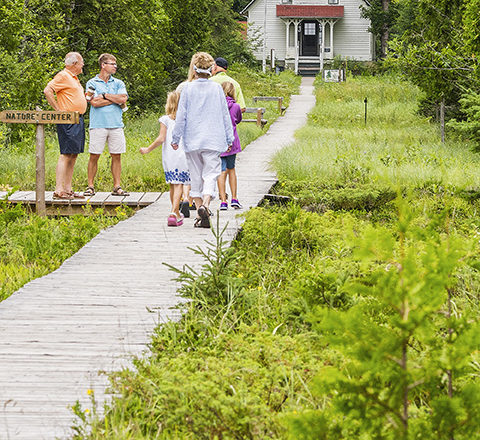 The new Hidden Brook Boardwalk (not pictured) connects visitors with the old boardwalk, where they can visit both the upper and lower range lights. Photo by Len Villano.

The Ridges Sanctuary’s board of directors has appointed Andrew Gill as executive director and Katie Krouse as director of operations.

Gill was the executive director of Pease Park Conservancy in Austin, Texas, for nearly four years before moving to Door County and co-founding Heirloom Cafe and Provisions in Baileys Harbor. While at Pease Park Conservancy, he developed the organization’s master plan, led a successful capital campaign and directed the growth of the organization. He’s also a founding member of the nonprofit Horseshoe Bay Farms Inc. and president of the board of the Baileys Harbor Community Association.

Krouse has been with The Ridges for six years, most recently as its program manager. In addition to developing and leading programs for visitors and coordinating volunteer programs, she’s taken on marketing and communication responsibilities and developed procedures that allowed visitors to safely experience the sanctuary during the pandemic. Krouse is also a board representative for the Lakeshore Natural Resource Partnership board of directors, representing the Climate Change Coalition of Door County.