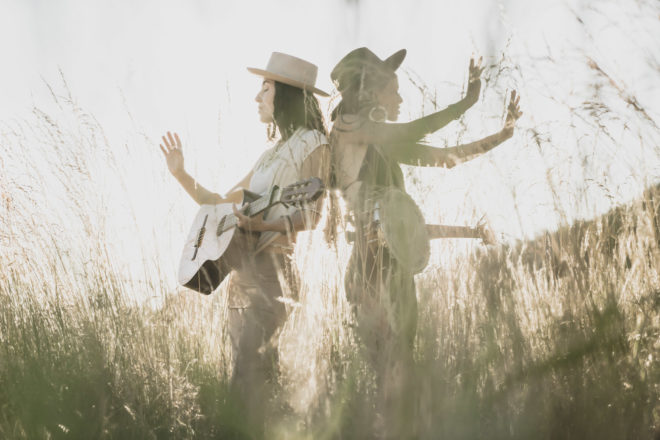 It’ll be a special evening at the DCA when Rising Appalachia plays: July 30, 8 pm.

“I’m awake for you,” sing this sister-sister duo, Leah and Chloe Smith, in their song “Harmonize.” It’s as though they’re singing directly to a singular listener – and at the same time a mass of listeners – to let them all know the sisters are listening back.

Singing to all sorts of people in all sorts of cultures and environments is central to what Rising Appalachia does. It’s the sisters’ musical blueprint to go where they’re invited, and they’ve performed in British Columbia, Europe, Bulgaria, Ireland, Italy and Central and South America.

The Pulse talked with Leah Smith about their journey, their new album and their visit to Door County.

The sisters are recognized for their expertly woven vocal harmonies, and both play instruments: Leah plays banjo and bodhran, an Irish frame drum; and Chloe plays guitar, fiddle and banjo.

They grew up in urban Atlanta listening to both hip-hop and the traditional Appalachian tunes their parents loved: an unusual combination that has informed much of what Rising Appalachia creates.

Two thirds of what the sisters write is original, and the other third pays homage to traditional Appalachian songs. For example, the song “Cuckoo” on their new album, Leylines, is an old song that many people have covered. The sisters know it from their mother’s rendition and decided to recreate it.

They aim to find a graceful bridge between modern and traditional sounds, Smith said. Hip-hop sometimes seems like it’s far more modern than bluegrass or folk, but Smith said hip-hop is the folk of the South. Once music becomes commercialized, people start categorizing it.

“I think the scandal in the music industry is to separate all these genres,” Smith said. “That, I think, is a bit insulting to music in and of itself. We grew up in the urban South, and hip-hop was very much the folk music. It was the front-porch music and the music of the street and the music of storytelling.”

Leylines has all the same ingredients of Rising Appalachia’s previous work, but perhaps more distilled, Smith said. Though it’s not a departure, there have been some changes.

Two new members have joined the sisters and their two longtime bandmates on the album. The longtime members are David Brown on the stand-up bass and baritone guitar, and Biko Casini on “world percussion” and n’goni, a West African stringed instrument. Joining them are Arouna Diarra on n’goni and talking drum, bringing West African influences; and Duncan Wickel on fiddle and cello, sharing Irish influences.

“It’s been a big dream for our project. When Chloe and I started it, we have always wanted it to tell the story of the ancestry of Southern music and folk music,” Smith said.

So much of what makes Southern music what it is comes from West African and Irish influences, she said. The banjo itself is derived from an old West African instrument called the akonting that Southern music tends to forget, Smith said. Using all of these elements contributes to the global sound of the band.

Another new aspect to the album is that Rising Appalachia opted to use a producer after producing its work independently for the past 13 years.

The sisters interviewed Joe Henry, who’s known for being well-versed in both world music and Americana styles – a rarity the sisters could identify in their own music. Though they had a deep respect for his music and the musicians he’s worked with, they were still anxious until they walked into the studio.

“We were nervous about whether we had sold our soul to the industry,” Smith said, but they immediately knew Henry was the one for them. He was very charming, gentle and dapper. They got a godfather out of the situation, Smith said.

Rising Appalachia’s global sound may be a large contributor to its ability to travel the world sharing music, but perhaps it’s also its belief in and dedication to social, racial and environmental justice and Indigenous rights that connects the group to so many people.

Traveling as young women – especially Smith, who moved to southern Mexico at age 18 until her sister’s visit years later – allowed them to see how wide the world can be, Smith said.

And if music hadn’t been the avenue to explore those things, it would have been something else. Smith mentioned art, radical theater, social-justice work and teaching as possible life alternatives, but she said music ended up being a surprise and a gift.

“I never planned on being a musician, and neither did my sister,” Smith said. “It was not on our top-10 things we would do. It’s been such an amazing path because it’s allowed us to work together, and it gives us work in the arts, but it’s a very public-service-oriented job, and it keeps us tied to the world at large.”

Rising Appalachia has been tied to Door County a few times before and will make another visit July 30. The group is excited to return and is even arriving a day early to explore the woods and water.

“We’re totally looking forward to coming back and getting our new material out to the faces that have been supporting us for a long time,” Smith said.