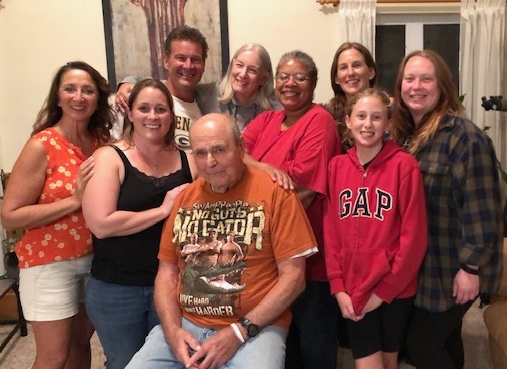 Harry Porter (sitting) with the cast of The Odd Couple – The Female Version. Submitted.

During its most recent show, The Odd Couple – The Female Version, Rogue Theater honored one of its greatest patrons. Judy Porter – a health-care pioneer who died on Dec. 25 – attended every Rogue show with her husband, Harry. She asked that memorial donations be given to a scholarship fund at the UW-Madison School of Nursing, from which she graduated in 1959 with a degree in nursing education.

During the show’s run, $5 from each adult ticket sold was donated to the scholarship fund, raising $1,600 for Porter’s fund. Harry Porter’s attendance and brief comments at each show also helped to raise awareness of the need for qualified nurses in our community.

Donations can also be made directly to the memorial-scholarship fund by making a check payable to the UW Foundation and sending it to the UW School of Nursing, c/o Norah Bushman, 701 Highland Ave., Madison, WI 53705.

Rogue Theater will be bringing The Odd Couple – The Female Version back to the stage for one weekend, Oct. 11-13. To learn more or reserve tickets, call 920.818.0816 or visit facebook.com/roguetheater.