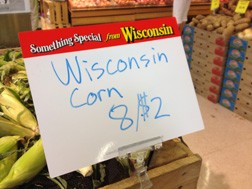 Roundy’s, Inc., a leading grocer in the Midwest, last week announced a joint venture with the Wisconsin Food Hub Cooperative (WFHC), a member of the Wisconsin Department of Agriculture, Trade and Consumer Protection’s (DATCP) Something Special from Wisconsin program, in an effort to provide communities with locally grown produce in its Wisconsin market grocery stores. All Copps, Pick ’n Save and Metro Market stores will offer new produce from WFHC.

Through this venture Roundy’s will be able to offer its customers locally grown produce, all harvested within Wisconsin. Roundy’s will post pictures of the local farmers, information on each farm, its location and history in three places – on the web, within stores and in print ads – so customers can get a feel for their produce’s roots.

“Roundy’s believes in supporting local farmers, and offering customers the best in Wisconsin-grown produce, while also supporting our local state economy,” said Steve Jarzombek, vice president of produce at Roundy’s. “We are excited about these partnerships that will make purchasing locally grown produce easy for our customers.”

WFHC enhances this partnership by giving local small family farms the opportunity to sell their produce to large retailers, like Roundy’s, due to WFHC’s ability to transport the crops to different locations around the state. The arrangement also helps money flow back into Wisconsin’s own economy, rather than importing produce from other parts of the country. The Roundy’s partnership represents WFHC’s first ever with a grocer.

“Wisconsin has a strong history and future in farming, and building supportive relationships between farmers and produce buyers is essential,” said Tara Turner, WFHC farmer-member and board president. “Roundy’s commitment, and the assistance from the Something Special from Wisconsin program, is an important part of bringing local food to the community.”

The Roundy’s commitment illustrates the importance of customer demand for locally grown produce in grocery stores around Wisconsin, and a desire to know where and how the food they consume became available in each store.

“When you identify locally grown and produced products, you make it easier for your customer to buy Wisconsin products and support the local economy,” said Lois Federman, director of DATCP’s Something Special from Wisconsin. “Roundy’s is responding to customer demand by selling and serving Wisconsin products, which will only grow as people continue to look to consume healthier, fresher products.”

As of now, the only Door County producer that Roundy’s partners with is Malvitz Bay Farms in Sturgeon Bay.