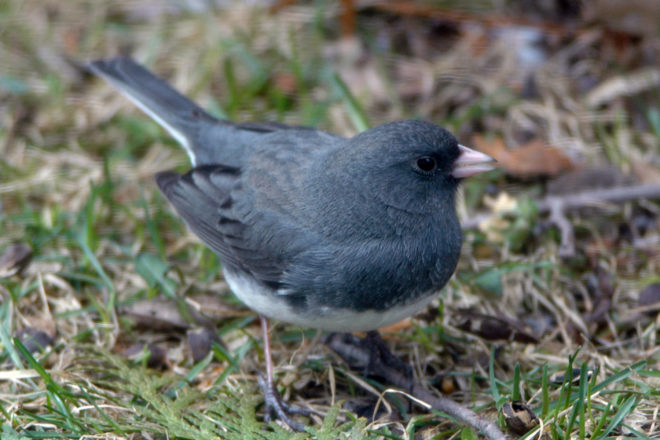 You can see the pink bill and white belly of this dark-eyed junco. Photo by Roy Lukes.

Wherever there’s a promise of something so simple and generally unwanted as weed seeds, there in November you’ll find the juncos. Like little gray ghosts with white bottoms, they have filtered into the state, staying to the brushy roadsides and the shrubby edges of woods. Were it not for their flashy white “taillights,” most would go unnoticed.

Cornell University’s winter bird feeder-watch project of the past several years has indicated that the juncos rank at the top of the list, or very near, of most common birds observed at people’s feeders. Our front yard feeders are no exception to this trend. These well-known birds have been regular winter residents in our yard each winter.

Many years ago we transplanted cedar trees to the west side of our feeders. They have grown nicely to windproof that area and give quick hiding places for the birds who visit the feeders when danger lurks. The juncos can be seen feeding on the ground just under the spreading branches.

Studies have shown that the seeds of ragweed, goldenrod, smartweed, bristlegrass, crabgrass and goosefoot rank high on the juncos’ list of favorite natural winter food. I enjoy watching them scour the ground in areas around our house in search of food. Surely the birds are also picking up small grains of sand and other coarse material that will be taken in by their gizzards to help grind up the hard seeds they swallow.

I have fond memories of attending regional conferences of the Inland Bird Banding Association, to which I belonged for many years. Some of our favorite workshops involved those helping to learn more about aging and sexing the birds we captured for banding. Unfortunately, as hard as some of the banders tried, having gathered great quantities of data over the years, they could not come to a foolproof method of determining the sex and age of juncos.

The catchword was always “tend.” Females and juveniles tend to show a greater mixture of brown in the plumage and less white in the outer tail feathers – but not always. Males tend to winter farther north than females, and the tips of the tail feathers tend to be more rounded in adults and more pointed in juveniles – but not consistently. 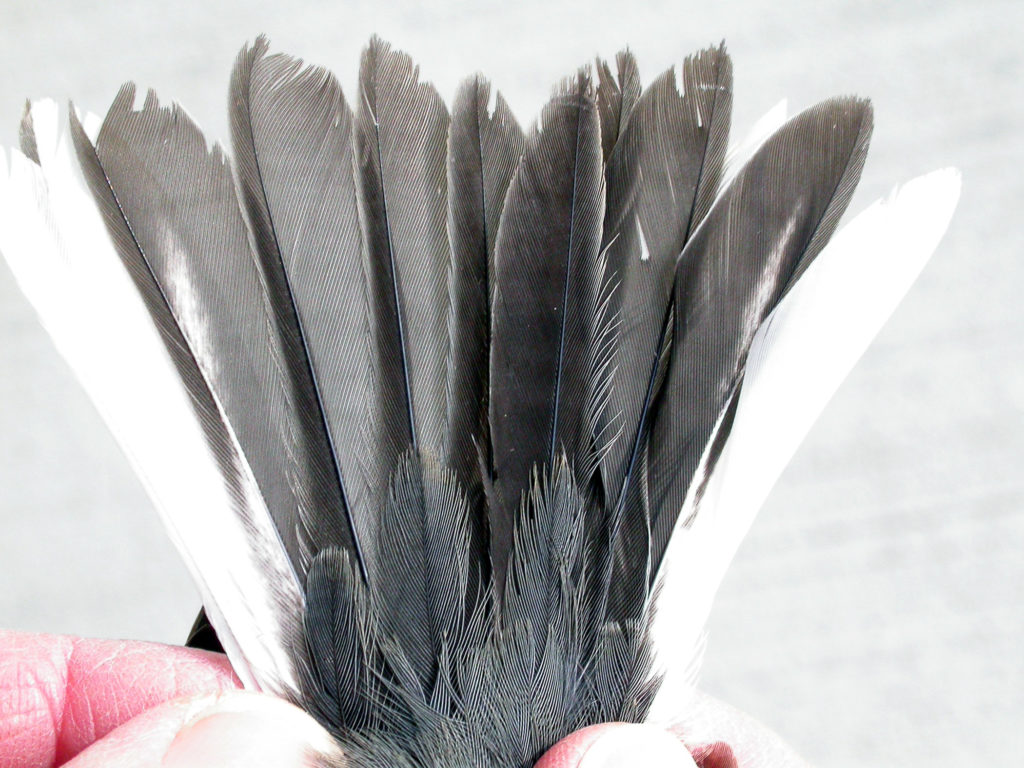 Roy captured a junco while bird banding and spread its tail to show the white outer tail feathers. Photo by Charlotte Lukes.

Whereas I banded quite a few juncos, I never had a recovery of one of those I marked using a small numbered aluminum band attached to one of their legs. A recovery was simply a bird that you banded and eventually was captured by another bander, and the number was recorded, reported and the bird released, or one of your banded birds was killed, for example against a window, and the band number reported to the proper authorities.

Since 1955 there have been approximately 1.6 million juncos banded in North America. Only 15,400 recoveries of those banded birds have been made, amounting to a rate of around 1.18 percent. Nevertheless, this data helps those involved in the research of migratory birds to continue to learn more about the lives of these small creatures.

For many years, up to 1973, there was a host of different races of juncos on our continent, including the Oregon, pink-sided, white-winged and gray-headed. Finally the American Ornithologists’ Union lumped all of them together into what today is known as the dark-eyed junco. However, some of the field guides still give strong mention to a few distinctive races including one of our favorites, the Oregon junco.

One of our all-time favorite junco experiences took place in late April 1975 while we were camping at the Great Smoky Mountains National Park. It involved watching a Carolina “dark-eyed” junco building its nest on a steep rocky slope in the park. Instead of migrating hundreds of miles north and south annually, this mountain dweller nests near the tops of the mountains of the East – Blue Ridge Mountains, for example, and then simply migrates in the fall to the lower and warmer elevations several miles away.

Even though juncos nest very sparingly in our state, they are known to breed south of the tree line in every Canadian province and, in northeastern U.S., where there is an extensive northern evergreen forest.

Clingmans Dome in the Smokies, with its tower to the sky, laced in the cool refreshing heady aroma of the Fraser firs, held us spellbound. The half-hour hike to the top, accompanied by the soft whisper of the wind in the trees, produced only one species of bird. You guessed it, the Carolina (dark-eyed) junco!

We welcome these congenial late fall lingerers with the white tail lights to our region knowing that a small number will remain throughout the winter.

These are the truly genuine “snowbirds,” shy, trusting, gentle reminders of the approach of winter.