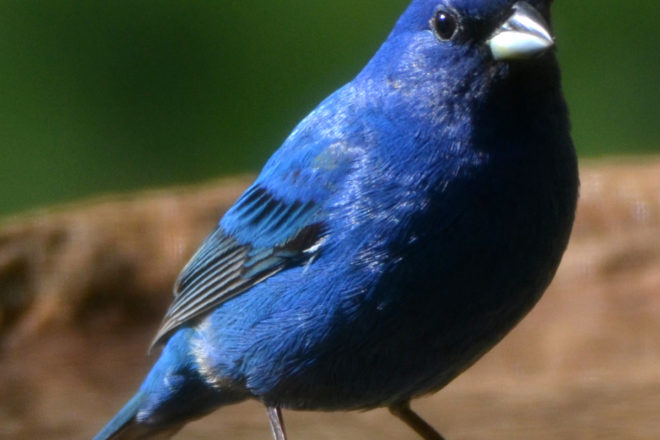 A male indigo bunting sits at the edge of a stone birdbath in the early morning sun. Photo by Roy Lukes.

When but in the middle of the merry month of May can you expect to see dazzling male indigo buntings, Baltimore orioles, rose-breasted grosbeaks, scarlet tanagers and brilliant yellow American goldfinches at your feeders and birdbaths all at the same time?

Trilliums carpet the woods, blossoming serviceberry trees decorate many roadsides and almost overnight the hardwood trees have leafed out in their finest greenery. Little wonder that this welcome fifth month of the year ranks as the favorite of so many Wisconsinites.

Hardly an early morning or evening passes without some bird sightings surpassing those of previous days. A few weeks ago we had 24 white-throated sparrows in the front yard, all enjoying millet and sunflower seeds. Now most have moved on to set up their nesting sites in parts of Door County and places farther to the north. 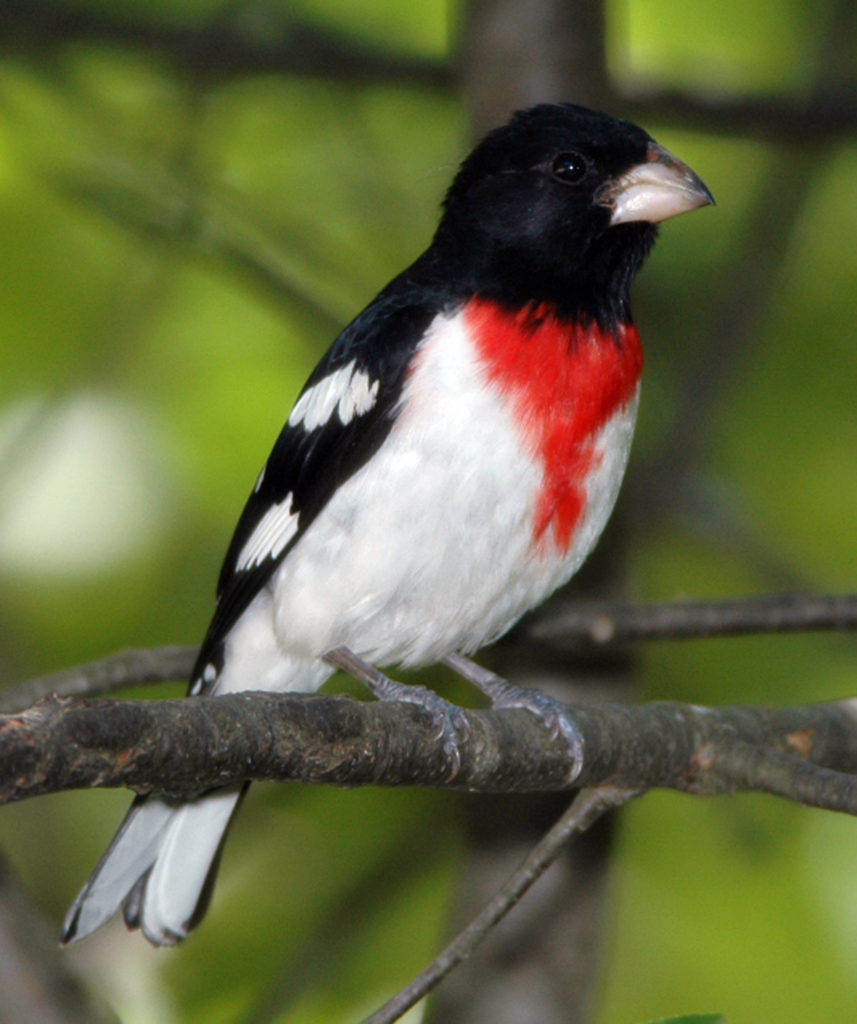 The song of the rose-breasted grosbeak is one of our favorites. Photo by Roy Lukes.

Few summer bird songs move me more than the rollicking sound of the male rose-breasted grosbeak. They have nested in our wood for all 33 years that we have lived here. Undoubtedly a lot of people look at the birds spending the summer in their yards as “their” birds, like orioles, catbirds and the rose-breasted grosbeaks, even though these species may live here for no more than four or five months of the year.

These birds along with dozens of other species head for areas to the south during the fall, leaving us to generally forget about them until the following spring. Upland sandpipers and bobolinks may head for Argentina while the ovenbird and other warblers may winter in some of the Central American countries.

It is very likely that many people believe that the returning birds here in spring simply look around, find an appropriate nesting site, and take up summer quarters. The search for suitable habitats is true when the birds return to their wintering niches in Latin America. However, they do not nest but just spend the “off-season” staying alive, finding good food sources and shelter.

Now suppose that a warbler will return to a 160-acre piece of land in Brazil, along with quite a few other birds that also lived in that same area the previous winter only to find that in the meantime the entire 160 acres of forest had been cut down. Cleared! Well, that’s easily solved. Simply go to the next woods you find and stay there instead for the duration of the winter.

In case you doubt that a 160-acre forest would be cleared from one spring to the following winter, the answer is that an area equivalent to 62,500 160-acre plots of forest is cleared in Latin America every year. That’s 10 million acres.

This stuns people into wondering what will become of some of these long-distance migrators that spend several months of each year south of the continental U.S., birds including the scarlet tanager, ovenbird, indigo bunting, gray catbird, Baltimore oriole, veery and great crested flycatcher. The answer is that their numbers will steadily decrease.

A plausible question to follow is, “Why has one-half of the natural vegetation in Central and South America been converted to upland and pasture in the past 50 years?” Obviously the tremendous growth of the population of people is the primary reason for this unbelievably rapid rate of deforestation.

This frightening pace of land clearing is directly related to an increasing demand in the U.S. for timber and beef. Think of Central or South American beef cattle the next time you bite into a typical fast-food hamburger because most likely that’s where it came from.

Another very bothersome point is the fact that in the tropical rain forest nearly all of the nutrients are locked up in the trees. Very little is in the soil. About the only way to return some of the nutrients to the soil is to burn the cleared trees. This “new” soil will support pasture or crops for about three years at most before those who have used it are forced to clear more land and start all over. One wonders what effect on worldwide weather systems this massive forest destruction will produce in the near future.

I can just imagine some South American entrepreneur, backed by U.S. money, screaming, “Go look in the mirror, you pious, self-proclaimed perfectionists, and you’ll see another culprit. What are you doing to help the total situation?”

We look around the countryside to see that our own 20-, 40- and 80-acre woodlands are being hacked and reduced into smaller and smaller pieces, divided by more roads, shopping malls, resorts, home sites – and the list goes on. Fragmentation of the once relatively undisturbed woods is indeed playing havoc with dozens of species of nesting birds. More and more I am convinced that we are living in an increasingly complicated world.

How desperately we need worldwide cooperation while we re-evaluate and adjust our lifestyles and get our own houses in order.

With this thought I want to highlight that this Saturday, May 14, is International Migratory Bird Day. It is sponsored by Environment for the Americas (EFTA), and promotes an international program emphasizing the approximately 350 species of migratory birds traveling through the Americas. This year celebrates the 100th anniversary of the Migratory Bird Treaty of Canada, the United States and Mexico to protect our shared migratory birds.