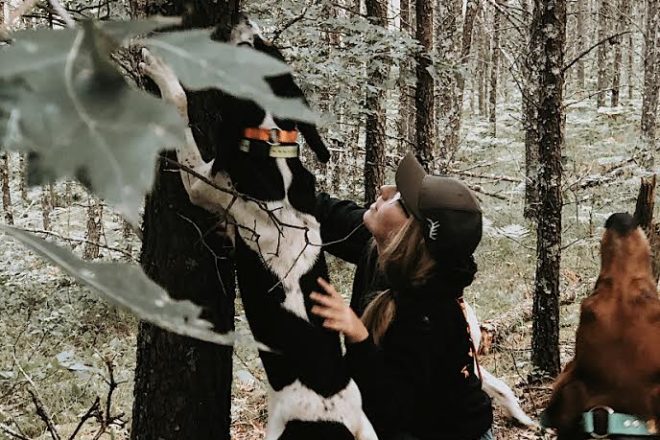 This is not your typical 16-year-old’s passion

Tia Wiesner’s summer vacation plans could be traced to her two-year-old self who, dressed in camouflage bibs, accompanied her family on a black-bear hunt.

“She was in the woods with us the whole while,” said Nicole Wiesner, Tia’s mother.

“She looked at me and said, ‘Dad, I want to do this when I’m older,’” Bryan, her father, recalled.

The what-I-want-to-be-when-I-grow-up passions of children are usually variable and fleeting. But Tia is now 16, and that’s exactly what she’s doing: training hunting dogs to run down prey. When the sophomore at Southern Door School District isn’t running hounds from her family’s Northwoods cabin, she’s wishing she were.

“Running my dogs – that’s my life and my happiness,” Tia said.

Wisconsin hound hunters are allowed to train their dogs on free-roaming, wild black bear between July 1 and Aug. 31. Wisconsin’s month-long, black-bear hunting season then starts Sept. 8. But there is no “off season” for a houndsperson, said Alaina Gerrits, an upland wildlife biologist with the Wisconsin Department of Natural Resources who owns and trains her own hounds for the bear hunt. She said the commitment and responsibility begin with pups trained on rabbits and racoons.

“You are always working your dogs,” Gerrits said. “It’s a ton of work.”

Tia and her family live in the Town of Forestville, but they travel to their Northwoods cabin every weekend during the winter to hunt rabbits with their five beagles. Once the summer dog-training season begins, Tia will head to Spooner to stay with family friends to work her bear-hunting hounds.

“I live with them for a month and run my dogs nonstop,” she said.

Hunting bear involves baiting and trail cams and methods for both cold and hot trails. The dogs run the bear until it’s treed or bayed (cornered), with the hunter trailing and tracking the dogs by their GPS collars. The long chase – Tia’s longest to date has been four hours – gives lie to the perception that running hounds is a lazy way to hunt.

“It’s the most physically taxing, hardest hunting I’ve ever done,” Gerrits said. “And the most rewarding.”

Tia hunts with a shotgun, rifle or compound bow, depending on the game and season and is “pretty accurate with everything,” she said. In her earliest memories, she angled for space in her parents’ or grandparents’ stand.

“It all depended on who had an empty spot in their stand for deer or turkey and smaller game,” she said.

“Ever since then, I was addicted,” she said. “It was like my drug. That’s when it really clicked.”

Last year, Tia finally convinced her parents that it wasn’t a fleeting passion.

It’s not an inexpensive addiction. It takes two trucks to transport their custom dog boxes, and they have kennels at both their Northwoods cabin and Forestville home. Beyond the regular training, Tia daily shovels dog feces, clips nails or administers medications. She even contributes her summer-job money toward the cost of the 50 pounds of food the dogs require weekly.

All the time and money required to train and care for hounds prepares the hunter for a rare opportunity to actually hunt a black bear. The DNR allotted 11,535 permits for the 2020 season, and nearly 120,000 hunters applied.

The state awards the permits through a preference-point lottery system, with hunters building points by applying each year. Gerrits said it takes about 10 years to get a tag for the far northern third of Wisconsin, the black bear’s primary range. For many, obtaining a permit represents a once-in-a-lifetime hunt.

“These dogs are bred to work, and they love it. They’re never happier than when they’re hunting,” Gerrits said. “They’re bred to be working dogs.”

Tia loves her dogs, but they’re not house pets, and she understands the dangers. Dogs sometimes get too close to a bayed bear, and wolves always pose a threat. But none of that deters her; she said adrenaline kicks in unaccompanied by fear. Even if she doesn’t know what she wants to be when she grows up, she’s certain that what she’ll still do is run hounds.