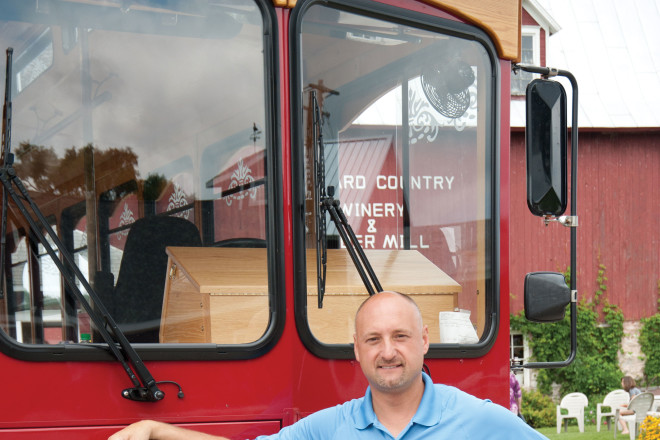 To say that Oprah Winfrey is responsible for all those red trolleys seen around Door County is not an exaggeration. The multi-million dollar queen of daytime television didn’t back the company financially or even tout it in O magazine; but, had it not been for an Oprah episode in the late ‘90s, A.J. Frank would not have had the catalyst he needed to pick up his life from the suburbs of Milwaukee and begin Door County Trolley.

The episode, which A.J.’s wife Cheryl encouraged him to watch one day when he came home from work, outlined the idea that everyone has a destiny, comparing it to a “mothership.” Oprah raised the question, “Are you sailing toward your mothership or are you sailing away from it?”

“I couldn’t even see what my mothership was,” said A.J.

“It was a really good wake-up call,” said Cheryl. “He had a realization that he was nowhere near his destiny; he was moving in the opposite direction.”

From the show, A.J. heeded the advice:  just do it. Oprah encouraged people to do just one thing a day – it didn’t have to be anything major – to turn their ship around and head toward their destiny.

A.J. started taking action each and every day toward his new future. One day he called the Door County Chamber of Commerce and had them send a visitor’s guide. Another day he researched trolleys on the internet. On another occasion, he found himself on a trolley tour in Savannah, Georgia. On a winter weekend he travelled to Door County where he discovered the booth behind Orchard Country Winery & Market that could be his depot.

From the small efforts of those days, A.J. created a business plan. He found himself asking:  Do I quit my job, sell my house, buy a trolley and move to Door County?

In May of 2000, he quit his nursing job in Milwaukee, purchased a trolley that his father-in-law helped him track down in Stillwater, Minnesota, and decided to take a chance on a life in Door County – a place he and his wife had vacationed.

“We just absolutely loved the area,” said Cheryl. “I paint, so with so many artists up here, it was wonderful for me in that regard. It was also the beauty of the area and wanting to get out of the suburbs. It is a good place to raise a family.”

“I thought the nostalgia of the trolley and the historic nature of Door County would kind of fit,” said A.J.

Cheryl also admitted that “at the time one of the driving factors was that our children were very small, and you want to instill that dream into your kids – that they can do or be whatever they want to. So, A.J. was wanting to be an example for our children.”

Ten years later, Door County Trolley has grown from one trolley into a fleet of nine. The company offers an array of tours, as well as the option for private rentals. And, all along the way, A.J. not only tried to provide an example for his children – now 12, 10 and 8 years old – but he also infused their presence into the business. Each of the trolleys are named after his children:  Jack, Eric and Katie.

“I kept spinning that cycle,” said A.J. “So there’s ones, twos, and threes of Jacks, Erics, and Katies out there.”

When A.J. started the business, he recognized that, should the venture fail, he could fall back on his degree in nursing from Carroll College and the 14 years of experience he had gained. While he has not gone back to nursing, he does not look at that experience as a waste of time.

“I learned a lot about people, and how to react to people,” A.J. said. “When you deal with the gamuts – from weddings to tours, to problems, to good things – you have to know how to treat people and treat different personalities. And I think that’s what nursing gave me.”

Another aspect of Door County Trolley that A.J has enjoyed over the years is the opportunity to entertain people. When he was growing up, he had always wanted to be an actor, and the trolley tours provided an opportunity for him and his staff to put on a show – they are providing an attraction, not just transportation.

“A lot of my tours are not just drive from point A to point B,” said A.J. “I do not do that. I am theme-based, narrated tours – from ghost tours to lighthouse tours – and [my guests] have to be entertained.”

Carrie Lautenbach-Viste, Co-general Manager of Orchard Country Winery & Market, where Door County Trolley has leased space since its inception, admitted that the partnership has faired far better than they could have imagined.

“I don’t know that we always thought it would be a great fit more than 10 years ago when he walked in one winter weekend, but it’s grown to be a perfect fit,” Lautenbach-Viste said. “It’s been a great partnership. A.J. is a great businessman; he always comes up with great ideas…He’s always trying to add that extra, special little touch.”

Cheryl is grateful that all of those extra efforts have helped the business reach a point where A.J. can take a day off each week.

“We try to keep Sunday as family day,” said Cheryl. In addition to spending time on their jet skis or playing baseball in the yard, she said, “This year we are trying to make a real effort to do some of those great touristy things that, as people who live here, we sometimes forget about. We’ve gone on the Harbor Lady and to the drive-in. It’s been really fun.”

It would not be an exaggeration to say that A.J., who has entrenched himself and his family into the fabric of the Door County community, is happy he took his wife’s advice and watched that episode of Oprah.

“I have the same feeling I did on day number one,” he said. “When I drive home I say, ‘God I’m the luckiest person to live in Door County. I get to make a living in the most beautiful spot. People dream about it; I actually get to do it.’”

The Coke Can vs. the Coke Product

“Everybody, I guess, praises their staff, but for me, I really kind of correlate it to Coca-Cola. Everybody knows the Coke can – it’s red and it’s semi-attractive – but the Coke inside, if it wasn’t good, nobody would buy it. And that’s exactly what I have:  the trolleys are beautiful; they’re attractive; they get you in. And then when you’re in, it better be a good product while you’re on it. And that’s what my drivers are – they’re the Coke product – they are my product. The trolley is a fancy package, but my product is great entertainment and a good time – and that’s really what I focus on. The trolley is only the Coke can.”

“I try to utilize the great places that make Door County great. I think most people will pay a little bit more money to have a better experience…I want something that when [guests] get there it’s a ‘Wow!’…I want unique, knock-your-socks-off places.”

“Those first five years were not very easy. I was not a Door County native and that carries a lot of weight here…[Locals] say ‘Wait five years and if you’ve established a great business, we will recommend you. We’re not going to do it before five years, because we see a lot of fly-by-nights.’ So, the fabric of Door County natives is huge up here. But I think you can break that wall once you become established and you’re part of it…You’re still not a native…but they’ll accept you…which is unique to any other area. I don’t care if you’re in Milwaukee or Green Bay, nobody asks you where you’re from – everybody is from somewhere else – but Door County holds that allegiance to their natives. I think once you break in that fabric they’re apt to know what you’re about, and word of mouth goes a long way.”

“The money comes in June through October and you have to budget up until May. What I find is I actually like the off-season because a lot of people close down, and that’s when I make hay. Because if there’s nothing else to do, if you have something offered, you win [by] default…I’ve really increased some of my tours with my Winter Wonderland; I do a Progressive Dinner. I’m steadily adding stuff in the spring season, so I actually think it’s a positive thing. I think those seasons can be all right…It’s a tougher season. You have to be a lot more creative. You have to think like the people coming that season. Winter and spring [bring] different travelers than summer and fall. You have to find out what their interest is, and you have to cater to it.”