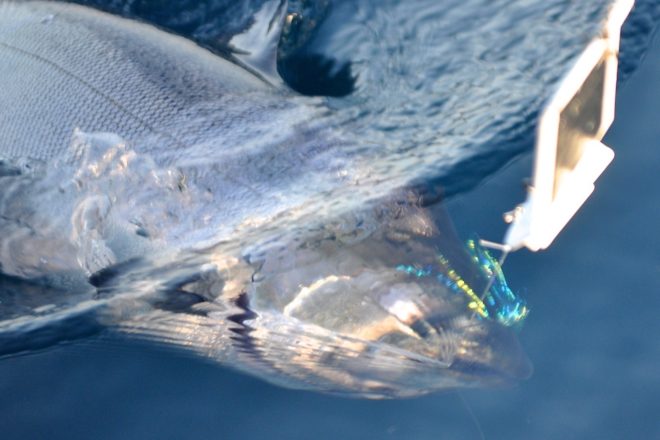 Trophy chinooks often battle 15 to 30 minutes before tiring out, and the anticipation to see just how big a fish is before it suddenly surfaces next to the boat is a major part of the Lake Michigan fishing experience. Photo by Kevin Naze.

Gorgeous colors fill the eastern skies at 5 am on Lake Michigan, and you’re sipping a cup of steaming-hot coffee to wash down a freshly baked doughnut. Or maybe the sun has just dipped below the western horizon on a sultry summer night, and you’re gripping an ice-cold can of soda. The lake is calm – barely a ripple – and your mind drifts.

Suddenly, a fishing rod dips violently toward the water’s surface and begins thrashing as line furiously melts from the reel. The sound of a screaming drag has everyone in the boat moving at the same time, and you lunge to grab the rod from its holder.

That intense experience is repeated thousands of times each summer off the shores of Kewaunee and Door counties, the state’s top producers of chinook (“king”) salmon.

Whether you take a trip on a charter boat, launch your own rig or step aboard a friend’s vessel, each outing brings a chance that the next fish you hook will be the largest you’ve ever tangled with.

Add a tournament – with prizes and bragging rights on the line – and you’ll feel an extra adrenaline rush with each hard strike.

The 37th Kewaunee/Door County Salmon Tournament is the longest-running and largest salmon-only fishing tournament in Wisconsin. And for the first time, it will start on a Friday, running July 19-27.

The nine-day event has produced a winning fish in excess of 30 pounds 21 times since it began in 1983, including a stretch of 11 straight from 1989 to 1999 and during six of the last eight years.

Anglers often battle fatigue as well as fish, with most participants rising between 3 and 4 am to take advantage of the pre-dawn bite. A lot of the heavyweights are reeled in within an hour or two of sunrise, but certainly not all.

The late Ed Steffen of Fish Creek caught a tournament-record salmon of 40.07 pounds in 1993, and he hooked it at noon – nap time for many sleep-deprived big-lake trollers.

Co-organizer Jerry MacMillin of Sturgeon Bay said committee members see fish that would be big enough to win one of the major prizes every year. The only problem? The angler failed to buy a ticket. The biggest “Oops – no ticket” was a 40.03-pounder caught on the last day of the 1996 event off Kewaunee by Pat Kafka of Wausau.

With a lot of 30-pound fish already reported around the lake this summer, MacMillin is expecting big things for this year’s contest, which lures close to 3,000 anglers for a shot at more than $50,000 in cash and prizes.

“I can’t imagine anyone fishing for salmon during that time [who] wouldn’t want to buy a ticket for insurance, if nothing else,” MacMillin said.

Part of the event’s allure is that you don’t need to be a seasoned professional to win. Although there’s some skill involved, MacMillin says that once an angler knows the basics of fishing for salmon, all it really takes is a whole lot of luck to have a trophy-size fish take the bait.

Past tournaments have produced champions at all five weigh-in ports: Algoma, Baileys Harbor, Kewaunee, Sturgeon Bay and Washington Island. Most years, the heavyweights hit flies, spoons or plugs 40 to 90 feet down in 80 to 180 feet of water, but who knows in 2019? For more than two weeks, many charter captains have been running 10 to 20 miles offshore to get in on a solid rainbow and lake trout bite in 400 to 800 feet of water.

Although a few chinooks and cohos have even been mixed in out deep, wind events after a long, mostly calm stretch should shake up the water this week and set up the thermoclines, bait and fish a lot closer to shore.

Want to give it a shot? You’ll need a fishing license, a Great Lakes salmon and trout stamp, and an entry ticket. Tickets – $25 for the full tournament or $13 for a daily chance – are available at B&K Bait and Tackle at Kap’s Marina on Washington Island, Jungwirth Ace Hardware in Sister Bay, Baileys 57, Howie’s Tackle and Greystone Castle in Sturgeon Bay, Algoma BP, and Accurate Marine & Tackle and Center Court Convenience in Kewaunee.

For more information, tournament updates and photos of trophy chinooks, check out the K/D Salmon Tournament on Facebook.