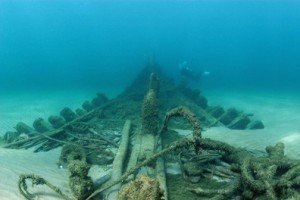 Australasia lies just 25 feet under the water at Whitefish Dunes State Park. A new exhibit about the ship and its unconventional sinking was recently installed at the park’s nature center. Photo courtesy of Tamara Thomsen, Wisconsin Historical Society.

There were no heroics involved in the sinking of the Australasia, a grand wooden ship in pieces at the bottom of Lake Michigan, just a paddle from Whitefish Dunes State Park.

“There was no storm, there was a fire…and a turkey dinner, which makes this story so fun,” explains Carolyn Rock, natural resource educator at Whitefish Dunes. The year is 1889. The Australasia steams south and the crew notices a fire when they pass Baileys Harbor.

The crew ran the ship aground, brought their turkeys with them in little rowboats to the shore. When they reached the shore, they went to the tavern while the rescue crew showed up and ate the rest of the turkey dinners in the ship.

“I want to know who the chef was,” laughs Rock.

The story of the Australasia, surveyed in 2012 by two maritime archaeologists – Tamara Thomsen and Keith Meverden – from the Wisconsin Historical Society, is a part of a new exhibit installed at the park. The grand opening takes place May 10 at 1 pm and features a ribbon cutting ceremony for the newest nature center exhibit and unveiling of new signage at the outdoor shipwreck exhibit. Thomsen will speak about the Australasia and its shipbuilder James Davidson.