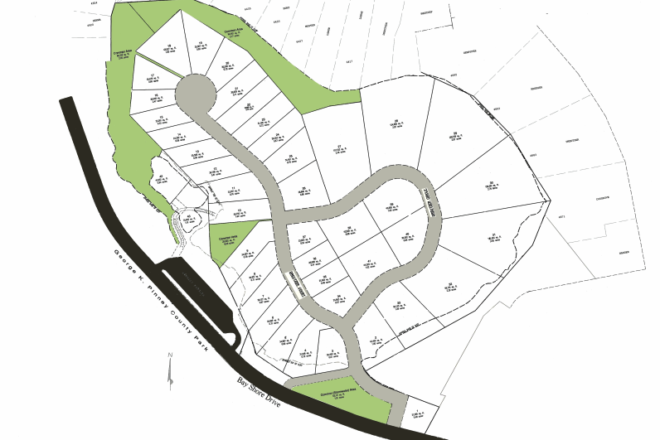 The Door County committee charged with oversight of land use took a first look at the conceptual plans for a bluff-top development of condominium units across Bay Shore Drive from George K. Pinney County Park within the Town of Sevastopol.

There are no special permits required, but the project does need to meet the requirements of two county ordinances: the land-division ordinance because five or more parcels that are fewer than 10 acres in area would be created; and Chapter 5 of the county code for major site condominiums.

“You’re not talking about the use, just how the land is going to be divided up,” said Mariah Goode, director of Door County Land Use Services.

This time, the same landowner – the Margaret Dreutzer Trust – intends to subdivide the 57.02 acres into 43 parcels of more than 20,000 square feet each for condominium ownership. The land is zoned recreational commercial, a zone in which a multi-occupancy development is an allowable use without a CUP.

The Door County RPC completed the first step June 3 with a review of the conceptual plan.

“The purpose of this is really for everybody to get an idea of what’s going on before moving on to the next phase, which is the preliminary plat phase,” Goode said during the meeting prior to the review. “If you had any significant concerns, you should voice them now because it’s time consuming and expensive for the applicant to put things together.”

The condominiums would consist of separate residences. The owners would buy the right to build on a parcel and use the land exclusively, but they would not own the land.

“For all intents and purposes, it looks and acts like a regular [residential] subdivision,” Goode said.

The conceptual plan review did not draw any public comments, but the county received 26 emails of opposition. One of those was from the Quarry Neighborhood Action Group (QNAG), a group that formed in 2019 to oppose the first plan, in partnership with the Bay Shore Property Owners Association. QNAG and other opponents said the same significant concerns existed “with this second attempt to develop a high-density village on the quarry.”

The recurring concerns detailed in the emails include groundwater protection; wastewater treatment; stormwater runoff; damage to surrounding properties; construction blasting, dust, noise and odor; and damage to the Niagara Escarpment habitat and wildlife.

The county received only one email in favor of the project and another from a Bay Shore Drive resident who said he trusted the RPC to “evaluate all proposals objectively and not be bullied.”

Peter Hurth, president of Baudhuin Surveying and Engineering in Sturgeon Bay, the surveyor for the project, answered questions from the RPC during the June 3 meeting. He said each of the lots would have less than 45% impervious surface, and a 66-foot road would service the development from Bay Shore Drive, with no access on the opposite side due to the steep grade.

Hurth said rock would be removed to create a gradual ascent.

“It will be about half the steepness of other roads in the area,” he said.

The condominium association would manage upkeep and have control over the appearance of the buildings and site. Different but thematically similar architectural options and packages would be available. All owners would share common areas such as the hiking trails. The buildings would not have basements – crawl spaces at the most, Hurth said – and no rentals would be allowed for fewer than two weeks.

State code allows up to 10 units on a single well, Hurth said, but one well would service every two to four lots, with casing drilled a suitable depth for the Niagara Escarpment.

One holding tank would service two properties. Hurth said the development would likely attract retirees rather than full-time residents, which would mean less sewage hauling. He said he had calculated how many trucks would transport sewage daily, but he didn’t have that figure with him at the meeting.

“But look at all the homes on Bay Shore Drive, and they have holding tanks,” Hurth said. “It is the same thing everyone is dealing with.”

There was no official approval needed for the conceptual plan, and none came. The RPC will next review the preliminary plat once it’s ready and can either “review and approve, approve conditionally, or reject the preliminary plat application and shall state in writing any conditions of approval or reasons for rejection,” according to the county’s land-use ordinance 3.03 (2).

“To my knowledge, no plat has ever been rejected by the RPC; they’ve either been approved or approved with conditions,” Goode said via email. “And if a plat were rejected, it doesn’t mean the applicants couldn’t come back with a revised preliminary plat that addressed the reasons for rejection.”