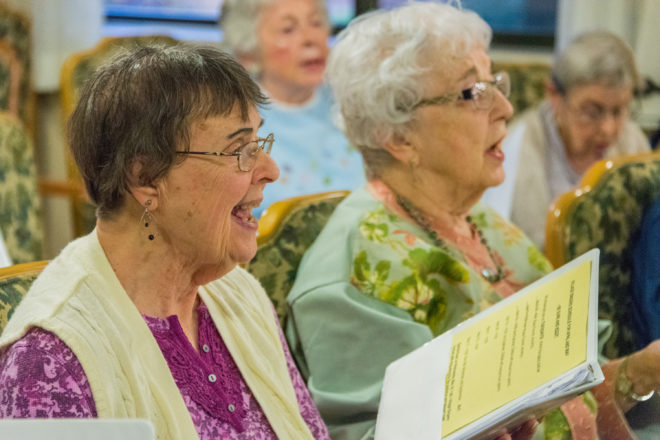 The Village Singers, under the direction of Challoner Brown, rehearse for their free May 18 performance. Photos by Len Villano.

Sometimes good things seem to happen almost spontaneously because the conditions are just right. Such was the case with The Village Singers at Scandia Village. While the vocalists are mostly in their 80s and 90s, their sound is timeless.

Barbara Larsen is well known in the Peninsula arts community as she was the first to serve as Door County Poet Laureate, and has left her mark both as a writer and a vocalist. Over the years, this former elementary school librarian has taught poetry writing workshops, helped organize writing groups, published her own work, and sung in a number of ensembles, including the Peninsula Singers. 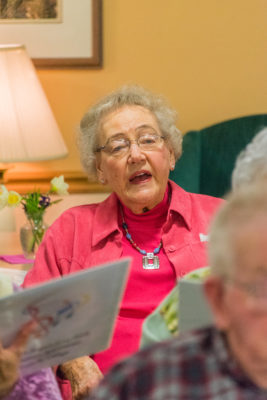 A few years ago she moved from her home on Beach Road to the Meadows at Scandia Village but she continues to contribute to the art scene of Northern Door.

“There was a sing-along after a program at Scandia Village,” Larsen explained, “and when I saw the joy on people’s faces, I went to different ones and asked, ‘Did you like singing?’ and they’d say ‘Oh, yes!”

When she proposed forming a chorus, many recalled past experiences singing in various groups and readily embraced the idea.

“I called Challoner Brown, who is a friend,” she continued, “to see if she’d be willing to serve as a volunteer director, and she said, ‘I’d love to!’”

And The Village Singers were born. About 18 vocalists rehearse weekly, singing four-part arrangements of traditional tunes such as “The Little Brown Church in the Vale,” “Swing Low, Sweet Chariot,” and “Shall We Gather at the River?” many chosen from the Golden Song Book. While they have sung for local residents, the singers will make their public debut May 18 in the dining room at the Meadows.

Their director, Challoner Brown, earned a degree in voice and music education from Lawrence University, and after teaching elementary vocal music for a number of years, took a law degree and in 1979 moved to Door County because of the vibrant arts presence.

“Why not direct the choir!” Brown laughed. She had known George and Barbara Larsen for years, singing with them both in the Peninsula Singers and her own madrigal group, the Amaryllis Consort.

“Barbara called and asked me,” she continued, “and it sparked something.” A number of the recruited Village Singers were former members of the Peninsula Singers and already her good friends.

She agreed to be their director and to work with their voices. “We do exercises to strengthen range and I give them tips, such as singing every day, especially in the shower,” she said, because the humidity is good for vocal chords. 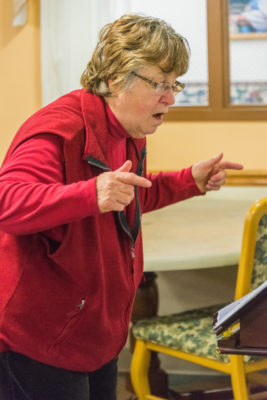 “The look of joy on their faces is indescribable,” she said. “When we do something well, they know it.

“Singing is really a good thing,” she added. “It makes you feel good inside, physically and mentally. We have fun. It puts a big smile on your face!”

“They sound like a professional choir!” said Judy Seiler, Assistant Senior Living Manager and director of activities at Scandia Village. “They have so much fun together with this common interest – it’s a magical bond. And Challoner is really good at what she does!”

“If you close your eyes,” said Senior Living Manager Karen McMurtry, “it would be impossible for you to guess the age of the singers, they are that good!

“What pleases me the most,” she continued, “is that this group was conceived by a grassroots movement.”

Seiler explained that ordinarily a program committee presents choices to the residents and then handles the details that make the activity a reality. “They decided that they wanted to create the singing group on their own. It’s the first time I’ve seen that happen.”

“You can’t help but smile at them,” McMurtry added. “Each and everyone of them smile while they sing!”

And the singers smile when they talk about their group as well. “We sing on pitch,” said Anita Beckstrom, who is a tenor in the group. “Challoner said so!”

“It’s healthy,” noted alto Loraine Brink. “You take in more oxygen. And singing gives you a feeling of generosity.”

Both women have had previous vocal experience, unlike bass Dick Gadient, one of the four men in the group. “I’ve never sung,” he said, “only in the bathroom! But they tell us we sing pretty good.” 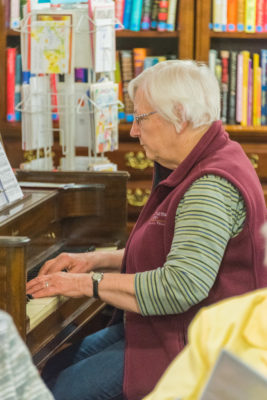 The Village Singers will perform a free concert May 18 in Sister Bay. Photo by Len Villano.

He credits Brown with their sound. “I think she’s excellent, the right attitude. She fits us like a glove. She doesn’t mind telling us when we’re out of step, and she knows what she’s talking about.

“Everyone seems to enjoy it,” he continued, “and it makes me feel good.”

For Jean Casey, singing in the choir is coming full circle. “In 1949 Barbara Larsen and I stood next to each other in the college choir at Lawrence University,” she said Barbara’s future husband George stood behind them.

“We don’t sound like we did,” she said, “more like cats in a barrel!” And then she laughed at her joke, well aware of the praise the group has received for their singing and of the healthful aspects of the activity.

“It’s very good exercise,” she noted, “and requires a great deal of energy for breathing and planning ahead. A wonderful choir. It is fun!”

She sings praises for the residents at the Meadows. “They are very bright people. I’ve never run across such an interesting cross-section, people who get involved. It’s good for us! We’re happy to be here!”

The Village Singers will perform a free concert at 1:30 pm on Wednesday, May 18, followed by a sing-along for the audience and concluding with refreshments.