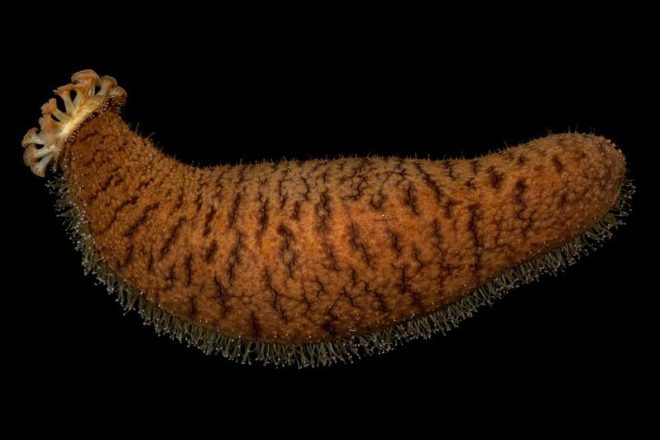 Ever heard of sea cucumbers? They’re cucumber-shaped relatives of starfish and sea urchins, but to look at them you would not believe the relationship. Sea cucumbers grow to be a foot or more in length and have bodies covered with short spines and/or warts. They breathe in an unusual way – by pumping water into and out of the anus, the lining of which serves as gills. Little “tube feet,” or suckers, along their undersurface enable them to move slowly along the ocean floor (starfish and urchins also move by tube feet). When threatened by predators, they exude a toxic slime, and if this does not work, they eject their digestive tract out the anus. The expelled gut distracts the predator, and later the cucumbers develop a new gut. Some sea cucumbers are associated with the Pearl Fish, a small, eel-like fish that lives in the cucumber’s anus. These little fish spend daytime backed into the anus, with the head sticking out, and they leave at night to forage for food. Apparently the sea cucumber is not adversely affected by its presence. In the morning, after the Pearl Fish is finished foraging, it finds its cucumber and backs into its “garage.” (reefed.edu.au; other sources)