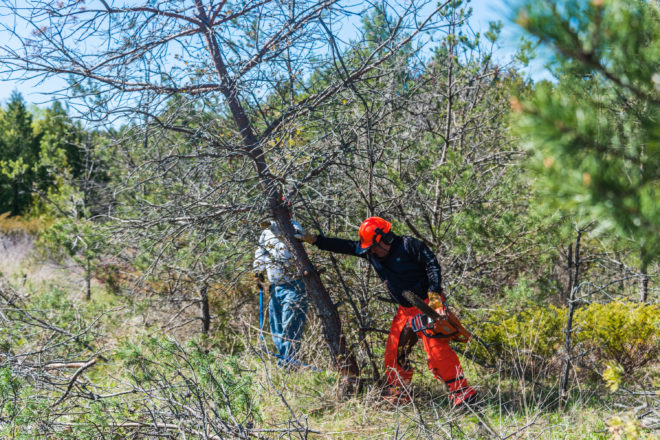 Lou Pasquesi and Ralph Blankenburg working at Three Springs Nature Preserve on May 17 in Sister Bay. Photo by Len Villano.

While Scotch pine may be the most popular Christmas tree in the United States, it’s an invasive species in the wilds of Door County.

Recently members of the Door County Land Trust and volunteer workers were at the Three Springs Nature Preserve in Sister Bay to remove Scotch pine.

“We’ve been taking out a lot of Scotch pine at Three Springs and planting native trees to infill. Once we removed the Scotch pine, we realized we had an open field,” said Amanda Pyke, land stewardship manager with the Door County Land Trust.

They’ve been replacing the Scotch pines with native trees such as white cedar, white pine and choke cherry.

“The ultimate goal whenever we do a planting like that is to keep invasive species away by occupying the same space they do, and return to a native mix for a higher quality wildlife habitat,” said Jodi Milske, the land trust’s restoration specialist.

Milske pointed out that there is always more to do with invasives.

“There’s a Scotch pine plantation next to our preserve. It’s been a very abundant seed source,” she said. “They are very mobile seeds in the cones. They can drop a long distance. Constant vigilance is the word. I’m hoping there’s an end in sight, but they’re not only on our property, they are throughout Door County.”

And, she adds, Scotch pine is one of the least annoying of the invasives.

“Two that are an epidemic – buckthorn and honeysuckle. Both of those were intentionally planted and used to be sold by nurseries,” she said. “The buckthorn has little berries, but they’re not very good for birds. They’re both very, very aggressive species.

Another that is a huge and growing problem is garlic mustard. That was brought over as a culinary herb by pioneers and it got into the world.”

Pyke points out that managing invasives in Door County relies on volunteers.

“Our volunteers are the heart and soul of our organization. We just could not do this without them,” she said. 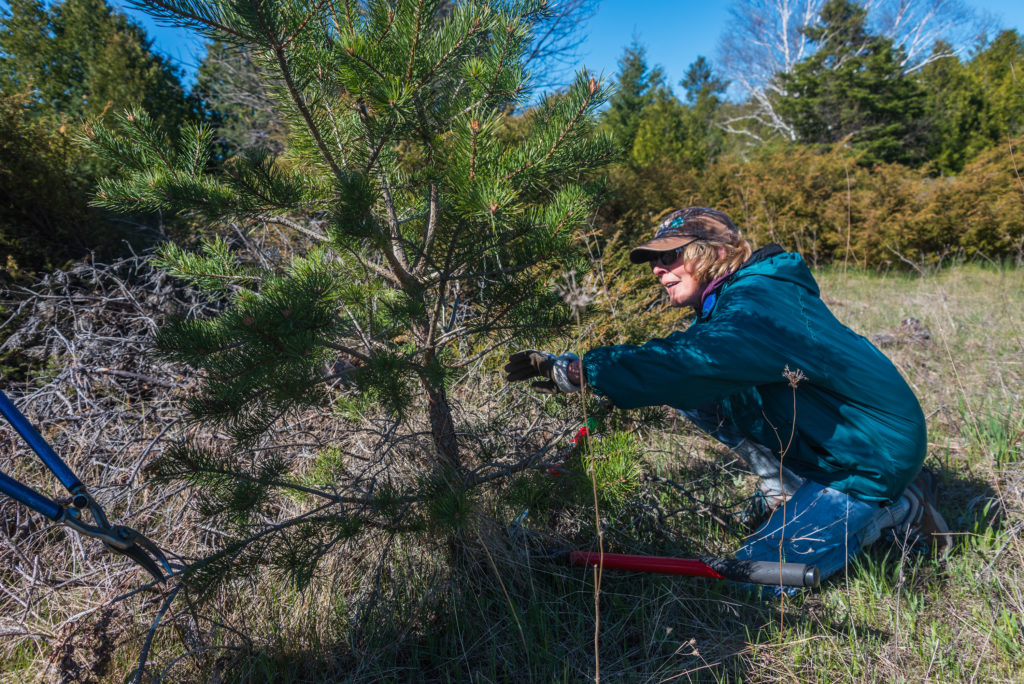 The Door Stewardship Alliance (DSA) was created in 2001 in an alliance between the Door County Land Trust and The Nature Conservancy. Approximately 25 work parties organized by the two conservancy groups are held each year at different locations around the peninsula. You can learn more about volunteering at doorstewardshipalliance.weebly.com.

“We put them on an email list and we’ll tell them where we’ll be and what we’ll be doing,” Pyke said.

She added that volunteers do more than fight invasive species.

“We do have many other volunteer opportunities other than the DSA,” she said. “For example, our preserve stewards at Three Springs do tours for us.”

Milske said a community effort is really needed to identify and control invasives.

“There are a lot of communities within Door County creating ordinances where they have to control certain species on their land,” she said.

She also advises that people can get help in identifying native and invasive species.

“We have our Door County Invasive Species Team (DCIST),” she said. “Kari Hagenow, the coordinator, who also works with The Nature Conservancy, will make visits and identify them for you. She is a great resource. And if landowners need equipment or certain tools to do work on their land, the DCIST has equipment they can loan.”

Find out more about DCIST at map.co.door.wi.us/swcd/invasive.