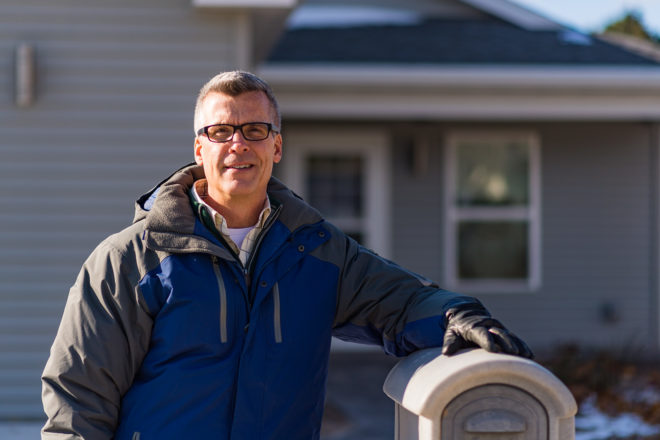 Outgoing Door County Habitat for Humanity Executive Director in front of the most recent Habitat home in Sturgeon Bay, the 42nd home in the organization’s 26 years. Photo by Len Villano.

David Van Dyke, the outgoing executive director of Door County Habitat for Humanity, said he won’t miss what he found to be the hardest part of the job he has held for the past five years.

“I always have to say the hardest part of this job is not being able to help so many folks who walked through my door,” he said. “Their circumstances are such that they can’t afford to pay us back, and we don’t give anything away. That is the hardest part.

“If I focus just on the people we served, that is the true reward, and working with the volunteers who help them in making those projects a reality for those families.”

During his five years on the job, Van Dyke has overseen five very different families who have achieved the American Dream of owning a home – one into which they have poured their own sweat equity.

Van Dyke admitted that he had no idea of the full extent of the Habitat for Humanity mission before he applied for the executive director position.

“Honestly, I was just interested in a job up here,” he said. “My wife at the time and I had been coming up here [on] weekends [from Appleton]. We bought a home in Baileys Harbor and were warned, ‘Once you get up here, you won’t want to leave.’”

In Appleton, Van Dyke was working in facilities and programming for the Girl Scout Council. When he learned about the Habitat for Humanity job, he contacted leaders of that organization in the Fox Cities to get a thorough briefing.

“I felt like I was then able to go to the interview and know a little bit more about how the program works and the expectations for the position, so that was very helpful,” he said.

But, he added, he told the organization’s board of directors that he was in it for only five years.

“The five years ended in October,” Van Dyke said. “My dream was to semi-retire and then pursue something that I went to college for – which is natural resources – but it’s sort of a desert for those kinds of jobs up here. I don’t want to job hop. I want to make sure to find the right position.”

He just knows he wants that position, whatever it might be, to be in Door County because, as it was predicted, he doesn’t want to leave. He added that the Habitat board of directors is already looking at several candidates to replace him, and he wishes them the best.

“I’ve agreed to stay around until the end of the year, but maybe the new person will prefer to go it alone,” he said. Either way, Van Dyke isn’t leaving the area.