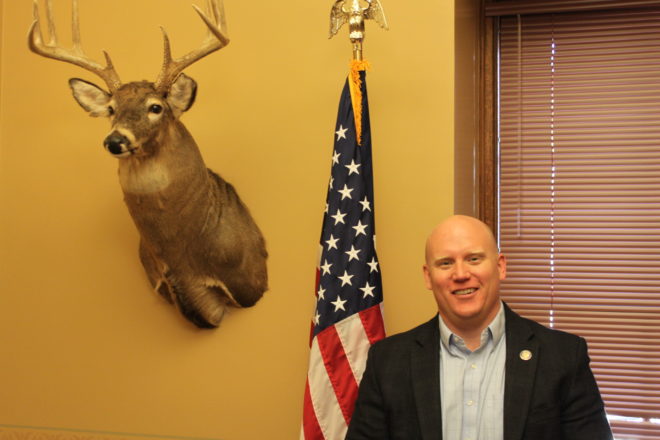 On Nov. 6, State Senator Caleb Frostman will once again find his name next to Assemblyman Andre Jacque for the election to hold the 1st District seat in northeast Wisconsin. While these are the same two men from the special election in June, the circumstances make this race anything but a rematch.

Two taxidermied deer had just found their home on the walls of Frostman’s office in the capitol building during a brief stop in Madison while on the campaign trail. Otherwise, the room was nondescript – like it was unclear if he had just moved in or was getting ready to move out.

“It feels like a different election,” Frostman said, referring to more than just being the incumbent. “We’re not relying on the power of incumbency by any stretch of the imagination because it’s such a unique period.”

By the Nov. 6 election, Frostman will have been in office for four months. With the legislature out of session, he has not voted on any piece of legislation. The election in June was the center of attention and the only decision for voters to consider at the booth, but now his name sits seven spots down the ballot, below higher profiles such as Scott Walker and Tony Evers, or Tammy Baldwin and Leah Vukmir. He had just two months to campaign the first time around, whereas the runway to the midterms has been primed since the 2016 presidential election.

“We haven’t dipped our toe in the bigger races much,” said Frostman on the way other elections may impact the race for the 1st District. “I think it behooves us to stay focused on our race and I think we have.”

But there is a political calculation that also takes place for candidates from more rural, specialized districts in how closely they tie themselves to statewide candidates. Frostman is quick to emphasize his passion for hunting and background in the private sector of economic development and finance; issues that could play well with the moderate voter in northeast Wisconsin. While he has participated in some fundraising events with Baldwin and Evers, he emphasizes the hyperlocal in his platform.

“Obviously if Tony and Tammy do really well and drive turnout then we’ll do well also,” Frostman said. “But being one out of 33 senate districts in the state and being one that was held by Republicans for 41 years, we have to focus really hard on winning our race.”

For Frostman, the 1st District race means promoting air and water quality, support for road projects such as completion of the southern bridge in De Pere and expansion of I-41 to six lanes. He also wants to  depoliticize the Department of Natural Resources, tackle health care affordability and encourage better investments of taxpayer dollars.

“Even though we’re not in session, I’ve loved being on the Wisconsin Economic Development Corporation board, having really interesting discussions in how do we invest and drive growth in the state and the smartest investments we can make with taxpayer dollars to benefit everyone,” Frostman said. “I’m frustrated with the philosophy that making Wisconsin open for business has to mean relaxing air quality and water quality regulations and wetland protections and those kinds of things.”