Painting himself as an outsider Republican, Jacque, who has represented Wisconsin’s 2nd Assembly District since 2011, appeared to be on the defensive from the beginning, repeatedly bringing up outside money in the campaign and in his summation referring to “false information” being put out there, but never saying what falsehoods he was talking about. 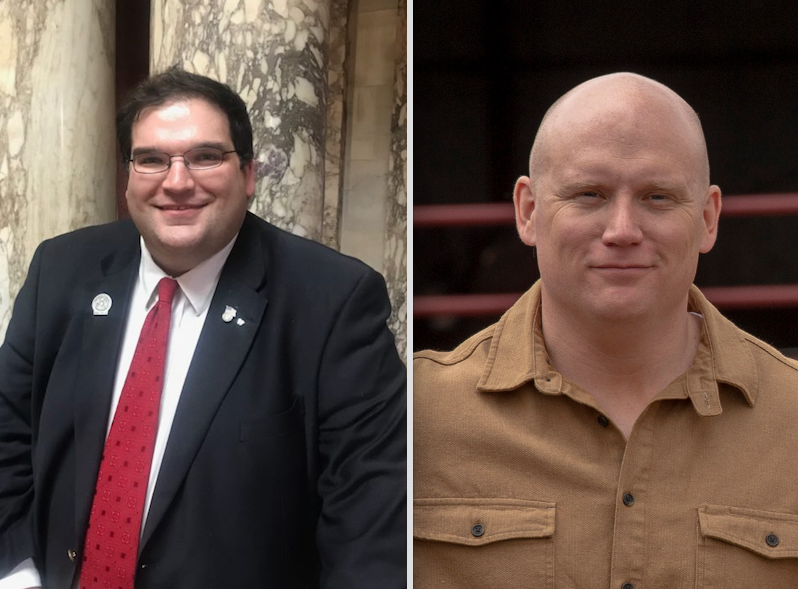 Jacque was snubbed by his legislative colleagues when he threw his hat in the ring for the Senate seat abandoned mid-term by Republican Frank Lasee in December when Lasee took a higher paying job in Gov. Scott Walker’s administration. Jacque’s colleagues threw their support behind a 24-year-old political newcomer named Alex Renard, who lost to Jacque by 330 votes in the May primary. Jacque then lost the special election to Frostman in June.

Jacque’s views on abortion is one of the reasons his colleagues did not support him. He has said in the past that he expects Roe vs. Wade to be overturned, and once introduced the “Personhood” amendment, which would have extended Constitutional rights to embryos as a way to put an end to abortions in Wisconsin. Even the group Wisconsin Right to Life admitted it was a failed measure that, if approved, would likely be overturned in court, but Jacque found little support for the measure anyway when he introduced it in two different legislative sessions.

Last year he introduced a bill that would have prevented University of Wisconsin-Madison faculty from training resident physicians in abortion, which the dean of the university’s medical school said at the time would cause the school to lose accreditation. The bill was largely ridiculed by other legislators and did nothing but generate bad publicity for its author.

Jacque said he took a lead in closing loopholes at Planned Parenthood, but he avoided mention of some of the more extreme views he has promulgated as the recognized anti-choice legislator in the Wisconsin legislature.

Asked to name several priorities should either be elected, Frostman said as he has been out campaigning, the overriding concern of constituents is the cost of health care that is causing some to decide between groceries, rent or health care. He also cited the importance of protecting natural resources, depoliticizing the Department of Natural Resources, raising wages in the state, and increasing job training and promoting the viability of careers in trades to young people.

Jacque said he would continue to work across the aisle on issues such as victims’ rights, human trafficking and drunken driving. He also cited infrastructure and making sure northeastern Wisconsin gets its fair share of available dollars. Jacque also said “we have wage growth outpacing the national average.” That depends on where you look, however the U.S. Bureau of Labor Statistics still puts the median Wisconsin wage at $17.81, while it’s $18.12 in the nation and $19.84 next door in Minnesota. Wisconsin ranks 32nd in the nation for job growth, also according to the Bureau of Labor Statistics.

Jacque said while he is supportive of medical marijuana, he listens to law enforcement on the issue of decriminalizing recreational marijuana and did not agree with the “blanket pardon of drug dealers and growers.” He added that “increasing access to addicting substances isn’t going to help anything.”

Asked their position on state levy limits on municipalities, Jacque said he has worked with municipalities in his Assembly district to eliminate unfunded mandates. He said both the shared revenue and school aid formulas are broken and need to be rethought.

Frostman said in his talks with municipal leaders, he has heard how levy limits are strangling communities. He pointed to the City of Sturgeon Bay and its 60-year replacement cycle for roads, which now has the city on a path to seek relief through a special resort sales tax. He said he is in favor of repealing levy limits.

On the question of criminal justice reform, Frostman pointed out that the state corrections system has a larger budget than the University of Wisconsin system. Time in a correctional facility should focus on rehabilitation and training, he said.

Jacque agreed that corrections should focus on correcting behavior. He said he is a supporter of treatment courts, but also would like to see increased funding for county district attorneys in order to expand treatment courts.

When asked about redistricting reform and the Iowa model (where a nonpartisan staff draws up the redistricting lines), Jacque seemed not to know what the Iowa model is. “Iowa’s very different from Wisconsin,” he said. He added that both parties are guilty of gerrymandering districts. “We don’t have objective people drawing maps,” he said.

Frostman said gerrymandering allows legislators to choose their voters, instead of the other way around. “With gerrymandered districts you get more extreme candidates,” he said, adding that he is a proponent of the Iowa model as a way to come up with a more fairly drawn map.

Asked if they feel individuals who identify as transgender should use the restroom of the sex they identify with, Jacque said the problem is allowing someone to choose the bathroom could impose on the rights of another individual.

“The fight for marriage equality is something that got me into politics in the first place,” Frostman said, adding that the attempted suicide rate is four times higher for LGBTQ people than their peers. “I will be an LGBT ally until I die,” he said.

Asked to give their thoughts on gun laws and the frequency of gun violence in this country, Frostman said he is a hunter and gun owner who believes there is plenty of room for common sense laws to save lives and still not harm the Constitutional gun rights, especially closing background check loopholes.

Jacque said there are plenty of proposals out there for gun laws, but the burden of proof that it will make things better is not there. “People intent on committing evil acts, a piece of paper on the wall isn’t going to change anything,” he said.

You can watch the entire forum on the Southern Door Auditorium website, southerndoorauditorium.org.